Final decision on Mineo to be made next year 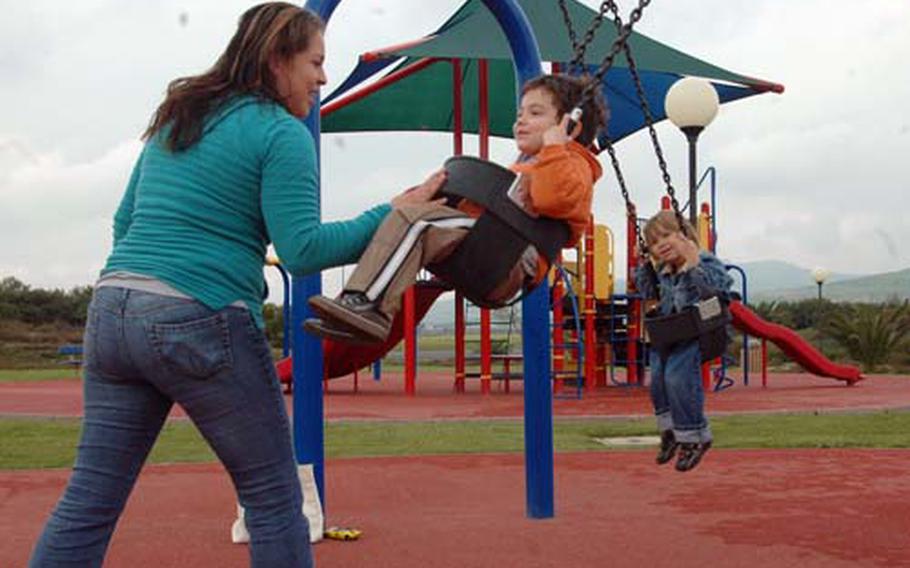 Joanne Aceves, who works for the Child Development Home project at the Navy&#39;s Mineo housing complex in Sicily, takes full advantage of the playgrounds at the government quarters when weather permits. She likes living in Mineo, in spite of its long distance from the Naval Air Station Sigonella&#39;s other bases. (Sandra Jontz / S&S)

MINEO, Sicily &#8212; Seems all good things must come to an end, Joanne Aceves lamented of the U.S. Navy housing area where she lives.

The Mineo housing area might be vacated and turned over to the Italian landlord in two years as the Navy in Europe reconfigures housing policies to make use of housing units the military pays for, regardless of whether they are occupied.

"I like it," said Aceves, who has lived at Mineo for about a year. "There aren&#8217;t a lot of cars, there are [playground] parks and we are nearby to other towns."

In spite of some imperfections &#8212; mainly its distance from the base and services &#8212; Mineo provides the perfect compromise for those who want to experience the Italian culture, she said, without actually living out in town.

But between 2002 and 2008, populations at Navy bases in Europe declined about 33 percent, leaving housing units on several Navy bases vacant.

The Department of the Navy requires an occupancy rate of 99 percent for its government quarters. If the occupancy rate falls below that level, empty units must be filled before members can opt to live off base, said regional spokeswoman Lt. Cmdr. Wendy Snyder.

Sigonella has two government housing complexes. Both Mineo and Marinai had some "excess" housing, resulting in a policy change in November in which the base commander placed a moratorium on new residents at Mineo. The Navy&#8217;s plan for now is to decrease the population at Mineo through attrition, rather than move residents out, said base spokesman Lt.j.g. Matt Knight.

The policy change filled the 526 units at Marinai, near Naval Air Station II. Mineo has 404 units, 269 of which now are occupied. The Mineo lease costs the Navy $8.5 million a year.

With NATO&#8217;s Air Ground Surveillance system to be located at Sigonella by 2012, the U.S. military expects troop numbers on the Sicilian island to increase by roughly 800. However, since plans for the system aren&#8217;t finalized, Navy leaders cannot speculate on the housing needs for the incoming forces, Knight said.

A final decision on whether to turn over the Mineo housing property to the Italian landlord won&#8217;t be made until late 2010, or about three months before the lease expires in April 2011.

The possible turnover of Mineo is one way the service is dealing with the decrease in the number of Europe-based sailors.

Mineo is accessed by a rural, two-lane highway, nestled in a valley surrounded by picturesque Sicilian hills and mountains. It is about 20 minutes from Naval Air Station II, the working base, and about 40 minutes from NAS I, which houses the commissary, Navy Exchange, schools and hospital.

It provides Sigonella-based sailors the benefit of living in government quarters, but with easy access to the Italian culture, said Petty Officer 1st Class Brock Riggen, dubbed the "mayor of Mineo." He serves as the link between the housing community and base leaders for quality-of-life issues.

Mineo has a Boys and Girls Club, ball fields, playgrounds, a small video rental store, community center and cafe. The small commissary is open every day but Tuesday, and the housing area has a two-truck fire department in the event of an emergency.