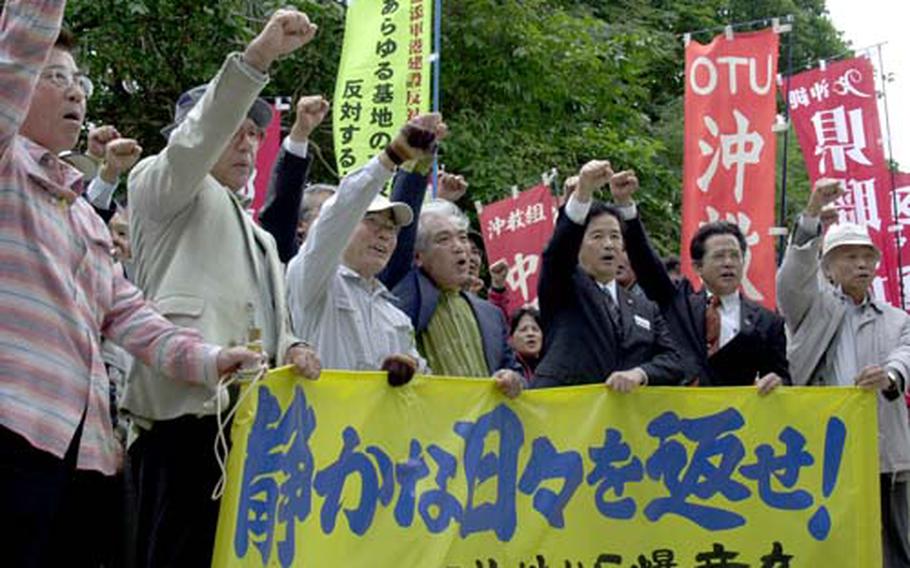 Ginowan residents who filed a lawsuit against the Japanese government over noise from Marine Corps Air Station Futenma march to Fukuoka High Court in Naha Thursday after a brief rally outside the court before a final hearing begins to wrap up their 8-year-old court battle. (Chiyomi Sumida / S&S)

NAHA, Okinawa &#8212; The video showed U.S. Marine helicopters flying low over homes in the city of Ginowan, lumbering cargo planes and fast fighter jets flitting over residential neighborhoods, and the aftermath of a helicopter crash on the campus of Okinawa International University.

The presentation was part of the final argument presented Thursday to a three-judge panel in the prefecture&#8217;s branch of the Fukuoka High Court.

Some 400 residents have sued the Japanese government for damages caused by what they claim has been excessive noise attributed to flight activities at Marine Corps Air Station Futenma, located in the heart of heavily developed Ginowan. Because of a lack of zoning laws, homes and businesses were built adjacent to the base fence line in the decades following World War II.

The residents and the government both appealed the decision. Government attorneys want the court to dismiss the suit, arguing noise levels have been reduced in recent years.

&#8220;The lower court ignored our core wish to remove the noise, the source that has caused us suffering for a long time,&#8221; Zenji Shimada, who leads the residents&#8217; group, told the judges Thursday. &#8220;There is no alternative but to close the air station to bring an end to our suffering.&#8221;

Government lawyers argued that noise levels were lower than claimed by the residents. They also contended not all residents suffered alike.

&#8220;They were not necessarily exposed to the same levels of noise, as upheld by the lower court,&#8221; a lawyer for the government said.

The government also argued that some of the residents should not be rewarded for moving into the neighborhoods while knowing of the increased noise levels. Besides, the Japanese government has spent about $1.2 billion for noise-proofing projects on homes and public facilities in the city, a government lawyer argued. And the U.S. and Japan agreed in 1996 to alter flight routes.

The court is expected to make its ruling on July 29.

The matter has been winding its way through the court system for more than eight years, even as the U.S. and Japanese governments agreed four years ago to close the base by 2014 and move flight activities to new runways and support facilities to be built on Camp Schwab, in rural northeast Okinawa.

That plan, however, is being reviewed by Japan&#8217;s new left-center government, which is exploring alternate sites for the Marine air operations. A decision on the relocation has been promised by the end of May.

U.S. officials contend there is no other viable alternative for relocating the facility and that MCAS Futenma will continue operations if the Camp Schwab plan is scrapped.

In Tokyo on Thursday, five members of the Diet from Okinawa warned that Okinawans would no longer accept the move of Futenma activities to the Henoko district of Nago.

&#8220;The Nago election sent a message that the plan has become unfeasible,&#8221; Okinawa (Uruma) representative Denny Tamaki said of Sunday&#8217;s mayoral win by anti-base candidate Susumu Inamine. &#8220;If the idea is revived, it could invite a prefecture-wide, anti-military movement.&#8221;