Final arguments are heard in civil suit over Kadena noise 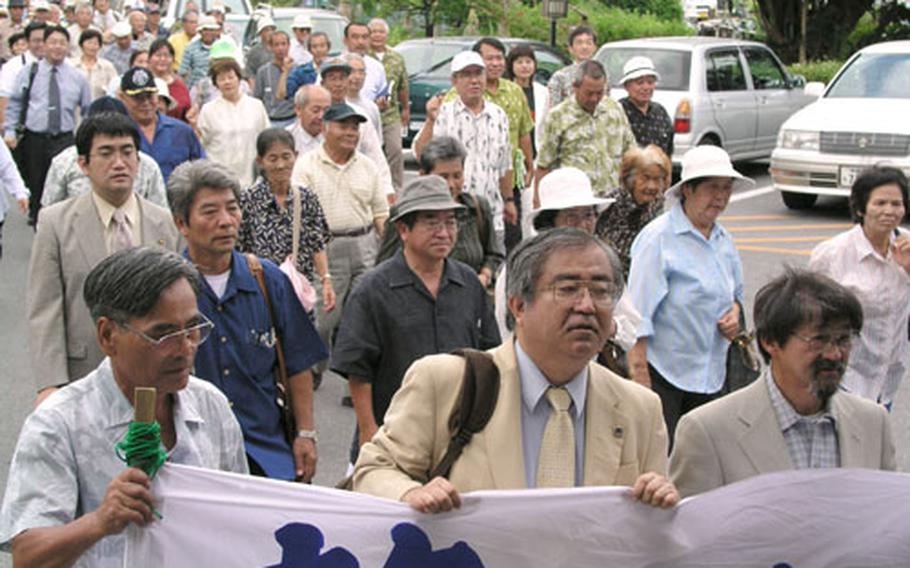 About 200 people take part in a demonstration Thursday in front of a Okinawa City court in support of residents suing the Japanese government over excessive noise from Kadena Air Base. Some 5,500 people living near the air base filed a lawsuit in March 2000 seeking suspension of night aircraft operations. (Chiyomi Sumida / S&S)

OKINAWA CITY &#8212; Neighbors of Kadena Air Base made their final arguments Thursday in a civil suit seeking $59.5 million in damages and the end of nighttime flights on the air base.

The class-action lawsuit was filed in March 2000 by 5,541 residents from six communities adjacent to the air base.

During final arguments in the Okinawa City branch of the Naha District Court, Riei Kudaka, 60, of Kadena Town, summed up the feeling of his fellow litigants, asking the three-judge panel to help the residents enjoy quiet nights.

&#8220;The noise pierces my ears and every time a jet flies over my house, I feel like the humongous roaring sounds crush my whole body,&#8221; he said. &#8220;My wish is to put an end to the murderous noise so that my children and grandchildren no longer have to repeat the same suffering I have gone through for so many years."

Kudaka moved to Kadena from Yomitan 39 years ago. Japanese government attorneys have argued that he and other residents moved into neighborhoods near the base knowing about the high noise level. The government lawyers also claimed the jet noise is within permissible levels.

Lawyers for the residents countered that they did not realize the extent of the health problems posed by the air base when they moved nearby. Many of the residents testified that they suffer from severe hearing loss as a result being exposed to jet noise for extended periods.

The government meanwhile, argued on a written brief submitted to the court in late May that there was no proof noise from the air base caused hearing loss.

The lawsuit is the second to be brought by Okinawans living near the sprawling air base in central Okinawa. In 1998, after 16 years of litigation, the Fukuoka High Court branch in Naha ordered the Japanese government to pay about $10.3 million to 867 residents. A demand to halt night flights was dismissed. The court ruled then that U.S. military operations, governed by the U.S.-Japan Security Treaty, were outside the court&#8217;s jurisdiction.

However, U.S. forces on Okinawa voluntarily adopted some of the noise reduction measures demanded in that case. For example, aircraft have been repositioning, &#8220;hush houses&#8221; for engine testing have been built and most flights between 10 p.m. and 6 a.m. have been stopped.

Also, Japan paid some $814 million to install soundproofing in about 59,000 homes near Kadena Air Base and Marine Corps Air Station, Futenma.

The latest suit demands flights be halted from 7 p.m. to 7 a.m.

&#8220;In the earlier case, when the court acknowledged that the noise was beyond permissible levels, therefore illegal, I was overjoyed thinking that the court finally understood our suffering,&#8221; Kudaka said during Thursday&#8217;s hearing.

He said aircraft activity increased after U.S.-led operations in Afghanistan and Iraq.

&#8220;When I see my grandson grab his mother after being scared by jet noise, I feel so helpless,&#8221; he said. Sumiko Jahana, 43, who was born and still lives in Gushikawa, said noise levels became worse over the past four years.

The court is scheduled to issue a decision on Feb. 17.