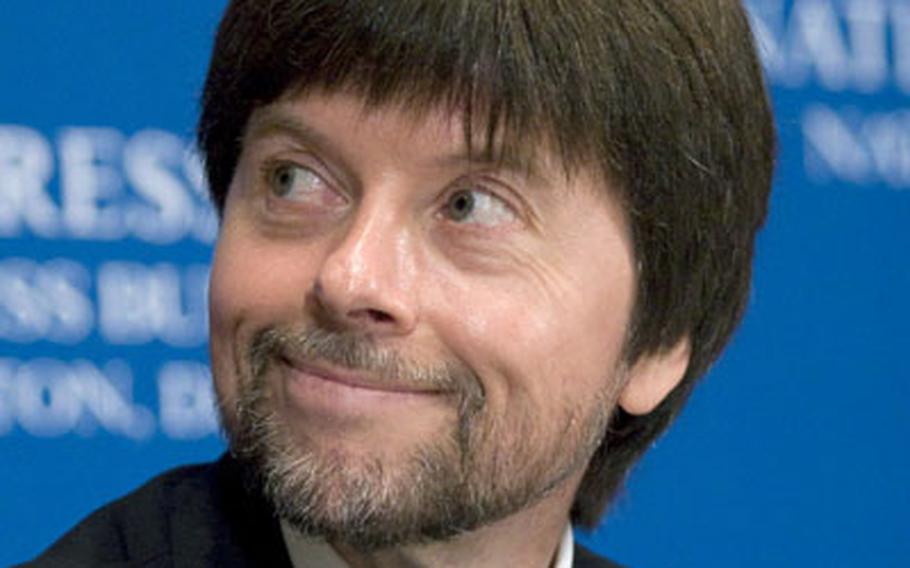 Filmmaker Ken Burns listens as head-table guests are introduced prior to his speech at the national Press Club in washington on Wednesday. Burns&#39; World War II documentary, "The War," begins on PBS this weekend. (Joe Gromelski / S&S)

Filmmaker Ken Burns listens as head-table guests are introduced prior to his speech at the national Press Club in washington on Wednesday. Burns&#39; World War II documentary, "The War," begins on PBS this weekend. (Joe Gromelski / S&S) 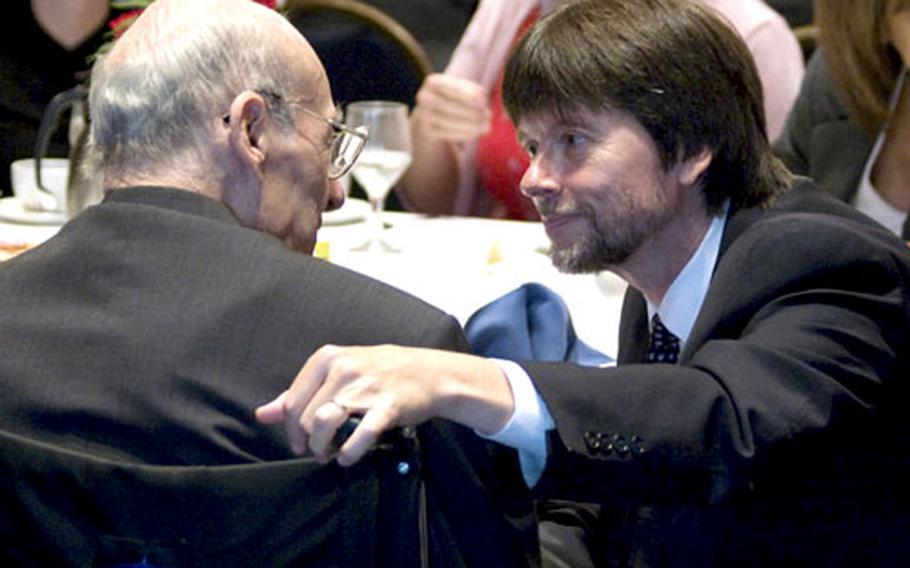 Before speaking at the National Press Club, Ken Burns visits with Joseph Vaghi, a veteran of the World War II D-Day landing and the Battle of Okinawa. Vaghi is one of the veterans featured in Burns&#39; new documentary, "The War." (Joe Gromelski / S&S) 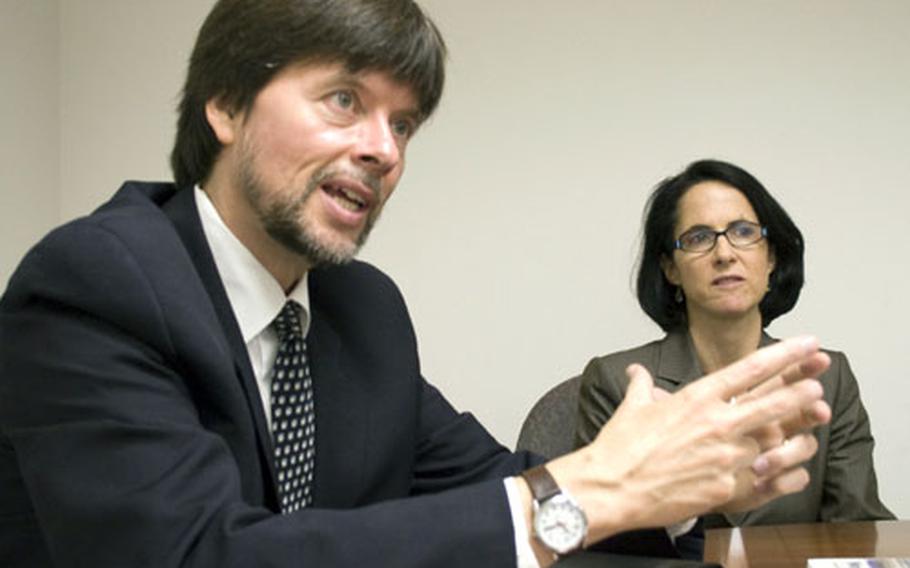 Co-producers and co-directors Ken Burns and Lynn Novick talk about their new World War II documentary, "The War," during a visit to Stars and Stripes&#39; Washington, D.C. office on Wednesday. (Joe Gromelski / S&S) 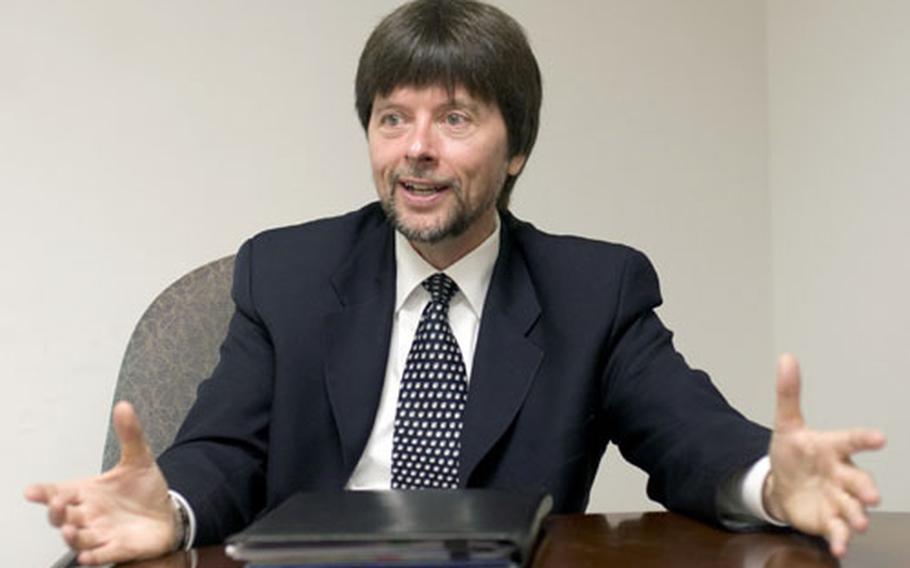 Ken Burns believes that during World War II, "in shared sacrifice we made ourselves richer." (Joe Gromelski / S&S) 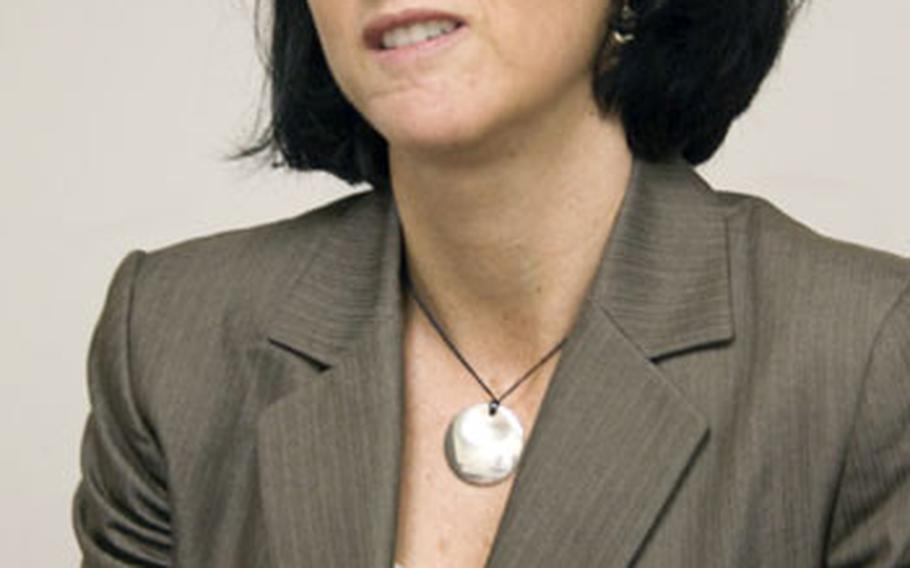 Lynn Novick says the filmmakers&#39; decision not to "sanitize" World War II footage has earned high praise from the military men and women. "They felt like we were showing what war was truly like," she said. (Joe Gromelski / S&S)

Listen to excerpts from a Q&A session with Ken Burns and Lynn Novick at the National Press Club.

WASHINGTON &#8212; Filmmaker Ken Burns thinks viewers of his newest documentary will be shocked to discover that war is hell.

&#8220;World War II has always been the good war,&#8221; he said in an interview with Stripes on Wednesday. &#8220;When those men came back, they were heroes. But people didn&#8217;t really want to hear about what happened over there. And in a lot of cases, they didn&#8217;t want to tell their children and wives about it.

The documentary, a 14-hour, seven-part series premiering on PBS next week, chronicles the United States&#8217; involvement in the war through the experiences of troops and families of four small American towns.

It includes sometimes-graphic interviews with those veterans and raw footage from battles in Europe and in the Pacific. Burns and co-producer Lynn Novick said pictures of troops floating face-down in the surf and stories of bloody, close-quarters combat have left many of their screening audiences gasping.

That has also earned high praise from the military men and women in the crowds.

That idea is even more important today with the disconnect between the general public and the troops currently fighting overseas, Burns said. During World War II, nearly every American family had a relative or neighbor who served some time in the military.

&#8220;Today, outside military families most people probably can&#8217;t name two cities in Iraq. Back then, we had maps of troop movements on the front page every day. Kids who were delivering the papers then had more geopolitical consciousness than most adults do today.&#8221;

And since so few families are bearing the sacrifice of the fighting, he said, most Americans don&#8217;t really appreciate the successes and failures overseas.

&#8220;I think the message there was that in shared sacrifice we made ourselves richer,&#8221; he said. &#8220;In the same way, the lack of a national sacrifice now is in a way dishonoring our men and women fighting overseas.&#8221;

The series is scheduled to debut on American Forces Network sometime in October; military officials haven&#8217;t worked out the rights and restrictions on the programming yet, but Burns and Novick said they&#8217;re working to make sure the series won&#8217;t be withheld from the overseas troops.

The filmmakers admitted they were reluctant to take on the project. They said Burns&#8217; award-winning Civil War documentary was a difficult process, both time-consuming and emotionally draining because of the subject matter.

"But then we learned that we&#39;re losing around 1,000 veterans a day," he said. "We didn&#39;t want the regret of missing that story. Hopefully, that convinces others to talk about those stories too, create a chance for these positive, cathartic moments for all veterans."