Filling IA billets a top priority for the Navy 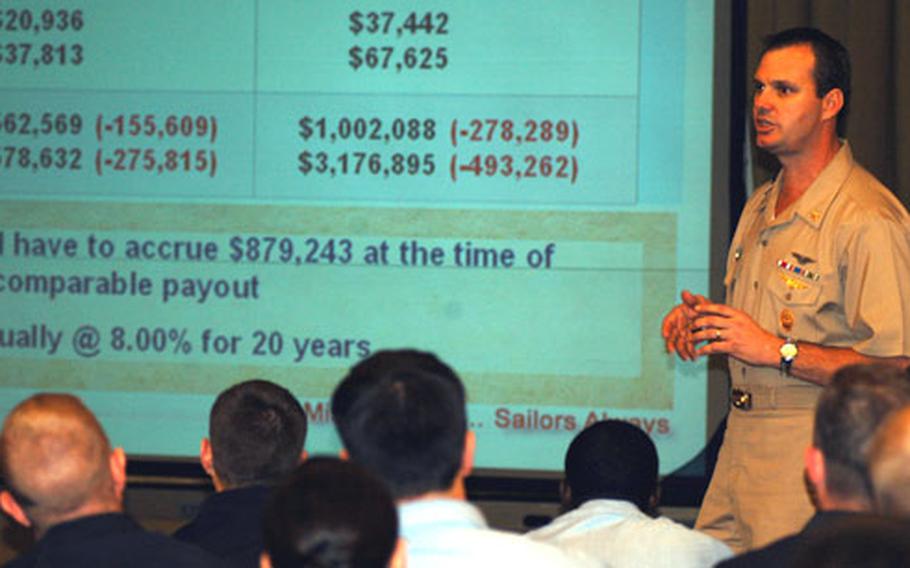 NAVAL AIR FACILITY MISAWA, Japan &#8212; As the Navy transitions individual augmentee duty into the job-assignment process, some sailors may find their only option for their next duty station is downrange, sailors were told Thursday at the Navy&#8217;s Career Management Symposium here.

&#8220;Over the next five to seven months, [global war on terrorism support assignments] are our first priority until they get filled up,&#8221; said Command Master Chief Kenneth Ellenburg, aviation team command master chief liaison for the Navy Personnel Command&#8217;s Center for Personal and Professional Development in Millington, Tenn.

As of December, the Navy had more than 14,000 sailors supporting the war in locations including Iraq and Guantanamo Bay. About 2,700 assignments still need to be filled, according to Ellenburg.

GSAs supplement other services and vary in length from a few months to a year or more.

About 73 percent of GSAs already have been moved into the new system, where they appear as billets to Navy detailers. The plan is meant to allow sailors to take a GSA when they&#8217;re at the end of their current assignment and talk to their detailers about their next permanent change of station move.

The Navy first will take volunteers for GSAs, Ellenburg noted.

Petty Officer 3rd Class Joseph Gonzalez, 22, a master-at-arms for Naval Air Facility Security, said he was trying to get a GSA.

But it&#8217;s not a voluntary assignment for everyone. Earlier Thursday at Misawa, detailer Senior Chief Martin Manuszak from the Navy Personnel Command met with a petty officer first class headed to Djibouti, Africa, to fill a mandatory GSA billet. &#8220;She had to go IA or get out,&#8221; Manuszak said.

His advice for sailors taking a GSA: &#8220;Negotiate your follow-on orders now. Figure out what your entitlements are.&#8221;

Sailors can choose whether they want an assignment on the East Coast or West Coast after a GSA, he said. They also get credit for sea duty while on a GSA and advancement points toward promotion, among other benefits.

Petty Officer 3rd Class Jermaine Morris, a master-at-arms, was heartened to hear that he&#8217;ll likely have plenty of time to plan for a possible GSA, even if it&#8217;s not voluntary.

Other issues discussed at the Career Management Symposium included:

Education tuition assistance. Ellenburg said the Navy is reviewing the requirement that sailors have at least a year left in the Navy to get tuition assistance. &#8220;That&#8217;s something junior and senior sailors are concerned about,&#8221; he said. &#8220;A lot of them have to ask for waivers to do that or extend.&#8221;In the last 24 months, 91 percent of first-term sailors in &#8220;perform to serve&#8221; were able to stay in their rate, according to Ellenburg. &#8220;Of 100 sailors who separated in November, 80 refused to convert to another rate,&#8221; he said.Navy detailers touring bases to help sailors make career movesNAVAL AIR FACILITY MISAWA, Japan &#8212; It was a little nudge in the right direction.

Words from a Navy detailer to an E-6.

Toll was part of a team of Navy detailers from Millington, Tenn., touring Navy bases in Japan this week.

Hickman was negotiating orders for his next duty station. One possible assignment would take him to a remote weapons station near San Diego. It was a hard-to-fill billet.

As Toll told Hickman, taking a billet that&#8217;s less popular might give him that extra nudge toward promotion.

Sailors who met with the detailers Thursday said it was time well spent.

&#8220;It&#8217;s a lot easier to talk to them face-to-face as opposed to over the phone or playing e-mail tag, especially when overseas,&#8221; said Petty Officer 2nd Class Kelly Anderson, an egress systems specialist also deployed to Misawa from Whidbey Island.

As a detailer, Toll&#8217;s job is to guide sailors in the direction that&#8217;s going to enhance their careers, he said.

Toll advises his sailors to be well-rounded.

In some rates, such as aviation ordnance and aviation boatswain mate fuels, there are fewer options for sailors due to conversion of jobs to civilians and military realignment, the detailers said.

Some sailors have had to make tough choices.

&#8220;We have jobs, just not jobs they want at the time,&#8221; said Senior Chief Martin Manuszak, aviation machinists mate lead detailer. But often, Manuszak finds, a sailor will grow to like a place he or she didn&#8217;t want, after becoming used to the routine and people there.

&#8220;Most of the people here want to stay here in Japan,&#8221; he said of Japan-based sailors. Sailors wanting to stay for more than two consecutive tours in Japan must get approval from Commander Naval Forces Japan, the detailers said.