Filipinos in the Navy support Duterte. His US policy? Not so much 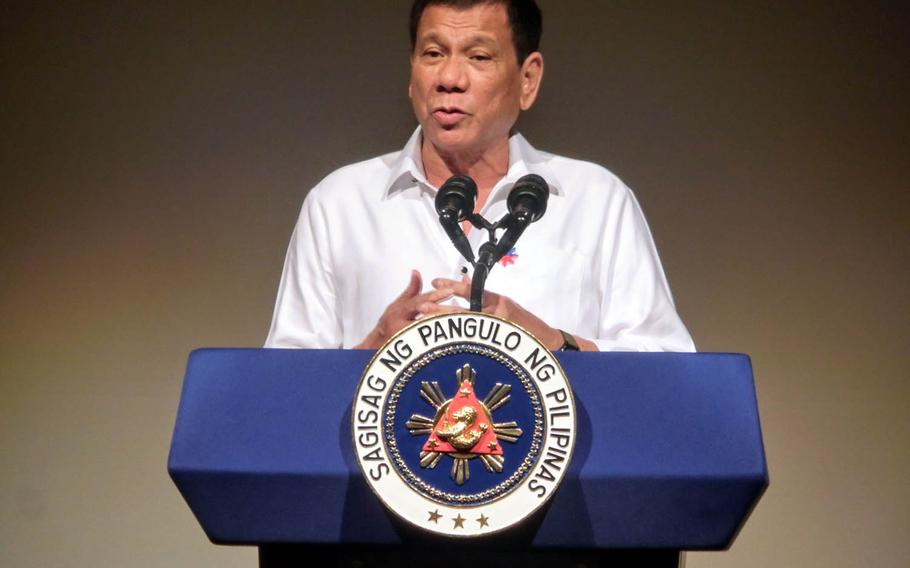 YOKOSUKA NAVAL BASE, Japan — Philippine President Rodrigo Duterte’s call to remove foreign troops from his country has left many Filipino-American sailors torn between sympathy for the president’s domestic goals and opposition to weakening the security partnership with the U.S.

The Navy long represented a goal for Filipinos looking for a better life; between 1952 and 1990, about 34,260 Filipinos enlisted under a recruitment program that let them join without first immigrating.

Filipinos continue to seek enlistment, while many Filipino-Americans have made the Navy a generational tradition. They now fill ranks from seaman to vice admiral.

When the 7th Fleet flagship USS Blue Ridge arrived in Manila for a March port visit, roughly 15 percent of its crew had Filipino ancestry. Some sailors on 7th Fleet ships remain Filipino citizens.

Duterte’s insults directed at U.S. officials, along with his demands that the U.S. military abandon anti-terror efforts and halt plans to share space at Philippine military bases, have left many in a quandary.

Duterte announced his “separation” from the U.S. on Oct. 20 in Beijing, though he later said he would not seek to end the U.S.-Philippines security alliance, which was formalized 65 years ago.

Donato doubted that China would prove as valuable a friend as the U.S. when it comes to fighting terrorism, which remains a particular problem in the south.

“Straying away from the U.S., that is not OK,” said Donato, who grew up in the northern city of Baguio and moved to the U.S. at age 18. “All the exercises the U.S. do are to deter terror, that’s why we are here. I don’t think that’s a mission of China.

“Breaking away from the U.S. is like saying you don’t want to be part of deterring terror.”

But other than that, despite international criticism over extrajudicial street killings resulting from Duterte’s national drug war, Donato and others voiced enthusiastic support for the recently elected president.

While multiple conversations with sailors started with foreign policy, they quickly turned to public safety concerns in the Philippines.

The turn largely mirrored concerns among Filipinos. Duterte ran his election campaign on an anti-crime platform, with little emphasis on security issues.

Donato grew up in a relatively safe neighborhood but says he knows people victimized by muggings and street crime. If Duterte’s methods are extreme, it’s because of the depth of the problem, he said.

“They’ve always had a problem with corruption back home,” he said. “I like his goals — his intentions are good.”

Duterte may have a good plan to work with both the U.S. and China – but if he does, he hasn’t shared it, said Jiyo Montanez, 20, a Navy family member.

Montanez, an American born to parents from Manila, called Duterte the first Filipino president to shed the “colonial mentality” that continued long after the U.S. relinquished control in 1946.

U.S. State Department officials have criticized Duterte over thousands of street deaths associated with the new leader’s war on drugs. Duterte told a news conference in September that he would be “happy to slaughter” 3 million drug addicts to end the problem.

Police statistics show 1,578 drug suspects shot dead by security forces since Duterte took office in June, according to The Associated Press. Another 864 people have been killed by motorcycle-riding gunmen, a hallmark of vigilante groups, with many more deaths classified as “unexplained.”

“If the president is really serious about justice, he should put more thought into investigating extrajudicial killings,” Montanez said.

However, Montanez also said Duterte’s campaign also has saved lives. When he hears from his relatives in the Philippines, they say they feel safer now.

Petty Officer 2nd Class Frederick Santos, 27, grew up in Quezon City and immigrated to the U.S. at 19.

Santos liked Duterte from the start and feels he will help the nation’s poor.

“At the same time, I don’t think it’s a good idea to cut ties with the U.S., because the U.S. helps the Philippines,” Santos said. “There are many Filipinos in the U.S. who support him but are not going to like that.”

Duterte’s jabs at Americans, whom he has called loud and discourteous, among other things, are making some Filipinos uncomfortable as well.

“My cousin is married to an American, and she said she won’t bring her husband to the [Philippines] because Duterte is anti-American,” Santos said.

Petty Officer 3rd Class Daniel Aldana supports getting drug dealers off the streets but isn’t sure whether to take Duterte’s sometimes-contradictory statements about aligning with China and Russia seriously.

Aldana, born in California to Filipino parents, said he is surprised at just how solidly pro-Duterte many of his friends in the Navy appear.

“[Duterte] is prideful, but I feel that that pride is too much,” Aldana said. “Sometimes what he thinks might be right is not always the right choice.”

If that remains the case, then little will have changed from last year, when 92 percent of Filipinos viewed the U.S. favorably -- higher than any other country surveyed, according to a Pew survey.

“I haven’t gone to the Philippines yet,” Andaya said. “I know a lot of our ships go there … I hope to come there someday.”