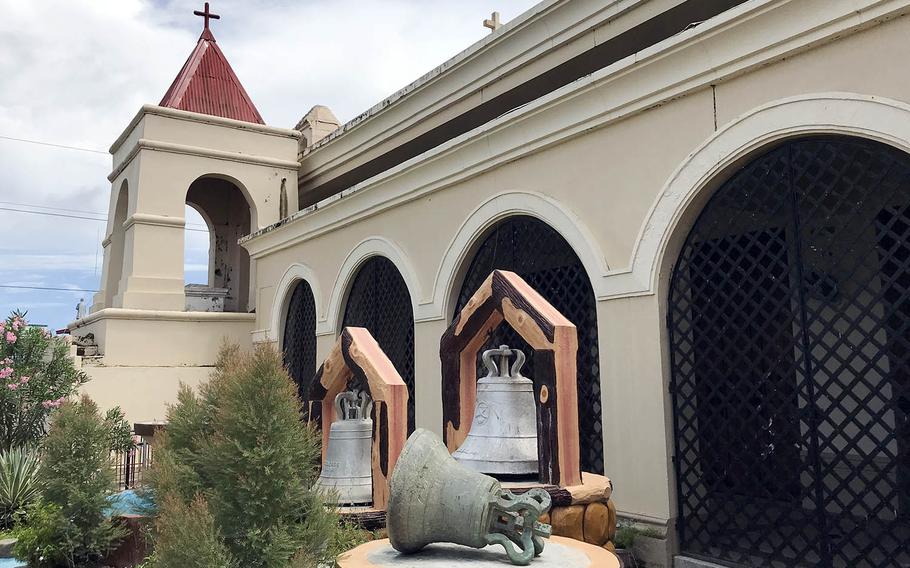 Buy Photo
Broken bells lay beside the rebuilt church at Balangiga, Philippines, where 48 members of the Army's 9th Infantry Regiment were killed in a 1901 ambush. (Seth Robson/Stars and Stripes)

Buy Photo
Broken bells lay beside the rebuilt church at Balangiga, Philippines, where 48 members of the Army's 9th Infantry Regiment were killed in a 1901 ambush. (Seth Robson/Stars and Stripes) Buy Photo
The rebuilt church at Balangiga is next to an outdoor ossuary where bones were recently unearthed that locals think might belong to American soldiers. (Seth Robson/Stars and Stripes) 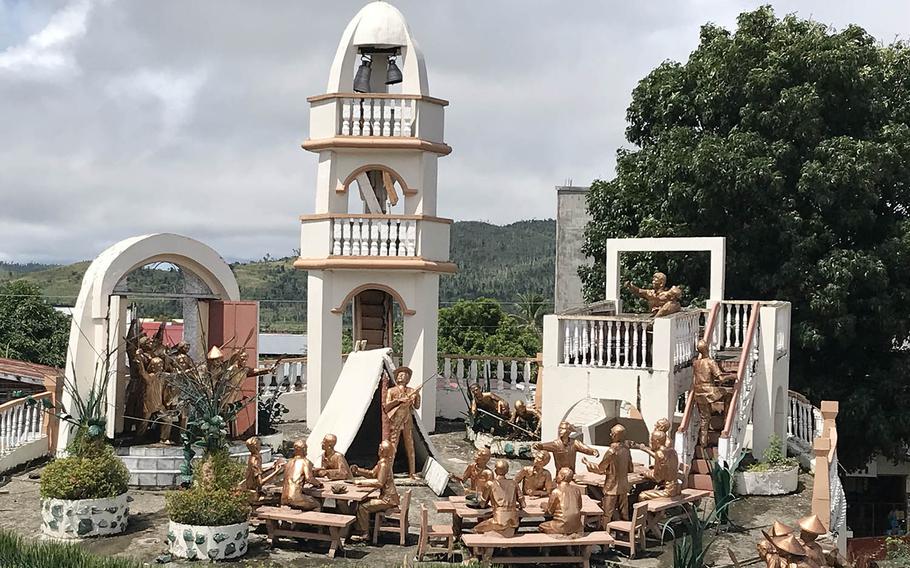 Buy Photo
A monument beside the church at Balangiga includes a replica of its bell tower and statues of U.S. troops being gunned down by insurrectos in the surprise attack. (Seth Robson/Stars and Stripes) BALANGIGA, Philippines — Residents of a seaside village on the island of Samar are getting ready to celebrate the return of three church bells seized by U.S. troops as war trophies more than a century ago after their comrades were massacred by local “insurrectos.”

Defense Secretary Jim Mattis said in August he’d seek to return the “Balangiga bells” held by the United States — two in Cheyenne, Wyo., and one at Camp Red Cloud, South Korea — to the Philippines. A Philippine government official said recently they would be handed back before Christmas.

In Balangiga, where the bells last rang in 1902, people will be happy when the bells come home, retired teacher and local historian Alicia Valdenor said late last month as she sat at the base of the tower where the bells will hang.

“It will serve as a reminder of how the first inhabitants of the place were faithful and dedicated Catholics,” she said.

U.S. troops took the bells during the Philippine-American war after a rebel ambush that killed 48 U.S. troops from the 9th Infantry Regiment, nicknamed “Manchus,” for their role quelling the Boxer Rebellion in China.

Philippine nationalists viewed the war, which lasted from 1899 to 1902, as one of independence, while the United States, which took the islands after the Spanish-American War, regarded it as an insurrection.

The bells were used “to signal the insurrectos, or rebels, who were under the command of Emilio Aguinaldo, to commence their surprise attack on the village of Balangiga and its garrison, Company C, Ninth Infantry Regiment,” according to a caption on a photograph at the 2nd Infantry Division Museum in South Korea.

The night before the attack, 300 insurrectos dressed as women entered the church with smuggled weapons, the caption says.

“They remained in the church until the following morning, when by arrangement between certain village officials and the insurrectos, the bell was rung as a signal to start the attack. In the ensuing savage fight, more than one-half of the seventy-four men of Company C, under the command of Cpt. Thomas Connell, were killed, and only four of the remaining Manchus escaped without wounds. Those Manchus fought fiercely and killed approximately 250 insurrectos by the time the battle was over and they were relieved by Company E, Ninth Infantry Regiment.”

Villagers presented the bell to the regiment when it left Balangiga on April 9, 1902, according to the caption.

The present-day people of Balangiga tell their own version of the story through a large monument beside the recently rebuilt church. The building and town were badly damaged by a super typhoon in 2013, sparking a large-scale relief effort by U.S. forces on Samar and the nearby island of Leyte supported by the USS George Washington aircraft carrier.

The monument, which lists the names of the insurrectos involved in the battle, includes a replica of the church tower and life-sized sculptures of the U.S. troops being gunned down at a breakfast table in a surprise attack.

Philippines researcher and author Bob Couttie has suggested the insurrectos were angry about a U.S. commander forcing local men to clean up the town after a typhoon.

But Valdenor tells a different version of the story based on a collection of notes on the incident compiled by her late father, who knew some of the insurrectos and spoke with them about the attack.

The fight broke out because they were angry and jealous about U.S. troops mingling with local women, she said.

“Communication was also a problem,” she added.

Road to Balangiga Getting to Balangiga from the nearest large city of Tacloban on the neighboring island of Leyte involves crossing the 1.3-mile-long San Juanico Bridge, passing through several armed checkpoints and along an idyllic coastline bordered by lush jungle and fields grazed by water buffalo.

Out here you won’t find the American fast-food restaurants or air-conditioned malls popular in Manila and other large cities. People live in simple homes with corrugated iron or grass roofs and work on farms, fishing boats or for the local government.

One thing the towns have in common with the cities are signs letting people know they’re in a “DRUG CLEARED BARANGAY” – an area supposedly purged of amphetamine pushers as part of President Rodrigo Duterte’s drug war that has resulted in thousands of extra-judicial killings.

Duterte, who has sought closer ties with China and Russia despite opposition from his pro-America military, demanded the return of the bells in a speech last year reported by the Philippine Star newspaper.

“Those bells are reminders of the gallantry and heroism of our forebears who resisted the American colonizers and sacrificed their lives in the process,” he said.

“Give us back those Balangiga bells,” he added. “They are ours. They belong to the Philippines. They are part of our national heritage. Give them back. It’s painful for us.”

The church is the first thing people see as they arrive in Balangiga. It has an impressive bell tower, stained-glass windows, a collection of broken bells, more than its share of gaudily painted icons and an outdoor ossuary with recently unearthed bones that locals think might belong to U.S. soldiers.

Valdenor’s notes show the town was officially recognized as a Catholic parish on April 1, 1854.

“In 1863 the first church bell was made from people’s donations of pieces of gold and coins,” she said.

That bell, inscribed with the name of local priest R. San Francisco, is in Wyoming with another made in 1889 that honors Father Augustine Del Gado.

The bell in South Korea was made in 1875 and bears the emblem of the Franciscan order, according to Valdenor’s notes.

Mixed feelings The idea of giving back the bells has an uneven reception by U.S. military veterans. In July, the Veterans of Foreign Wars approved a national resolution in favor of returning them but others have suggested that handing back battle trophies would set a precedent for countries to make similar demands for relics from other wars.

If and when the bells come back there will likely be a visit from American officials. It’s unclear whether U.S. veterans would participate, but back in Angeles City – near the former Clark Air Base on the island of Luzon – old soldiers have mixed feelings about the endeavor.

Jim Collins served with 1st Battalion, 9th Infantry Regiment in South Korea at Camp Greaves from 1976 to 1977 and at Camp Liberty Bell from 1981 to 1983 and was proudly wearing a belt buckle featuring the unit’s “Manchu” emblem on a recent Saturday.

“If the U.S. government wants to return the bells and it makes peace with the Filipino people I’m all for it,” he said. “I hope it will resolve differences between us and we would become better friends.”

But it would be disappointing if the bells became part of an “anti-American shrine,” he added.

“The Filipinos have a ceremony down there every year where they are proud of the insurrectos. It might be perceived as an apology for past colonialism, and it could be a point of contention between us and them. It could be a tourist attraction for anti-American types,” he said.

However, Sanny Elacion, a local government administrator working on a renovation of the memorial to the insurrectos, said locals would be friendly to any Americans who came there to return the bells.

“They are helping Filipinos,” he said.

“After all, America protects the Philippines,” she said. “We will be very thankful to the American people if they return the bells.”