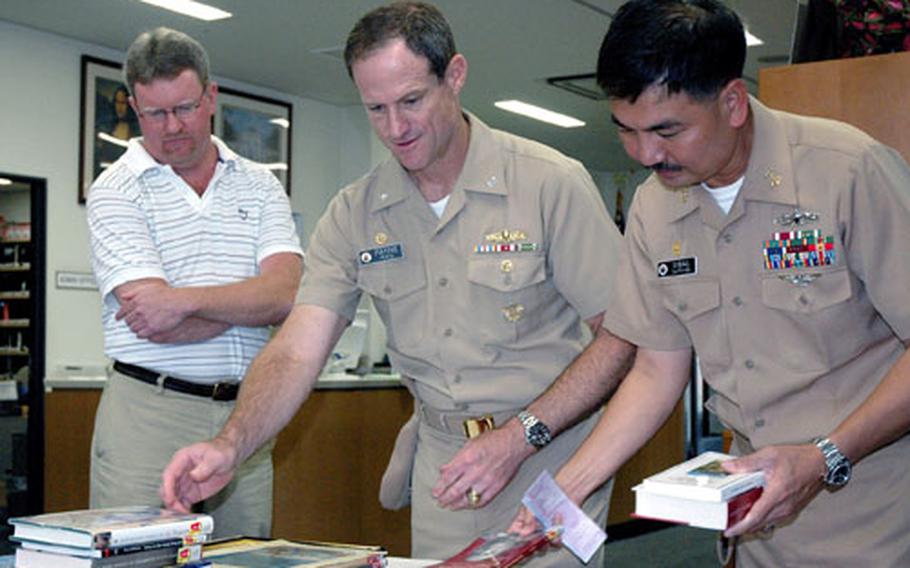 Marcos Sibal reported to Navy boot camp in 1983. It was his first time in America.

His journey had started in the Philippines with a newspaper ad inviting Filipinos to join the U.S Navy.

Sibal, who had finished college, decided to do just that. He started in a group of about 1,000 potential recruits from his country. A series of tests whittled the pool to about two dozen. He had made it. The Navy sent him to recruit training in San Diego.

Last month, he answered his phone to hear Vice Adm. Doug Crowder telling him of his new assignment as command master chief of the Navy&#8217;s 7th Fleet.

The 7th Fleet is the Navy&#8217;s largest forward-deployed fleet. It covers 52 million square miles in the Pacific and Indian oceans, from the International Date Line to the eastern coast of Africa. The fleet includes as many as 50 ships, 200 aircraft and 20,000 sailors and Marines.

Sibal will report to the fleet in mid-month. His assignment makes him one of just a few sailors native to the Philippines to serve as the senior enlisted member in such a large Navy command, according to the public affairs office at Sasebo Naval Base, Japan, where Sibal has spent the last two years as the top enlisted sailor.

Navy officials at the Pentagon last week could not confirm whether Sibal might be the first Filipino to hold the rank of command master chief at the fleet level.

Sibal wasn&#8217;t sure either. But after more than 100 years of service, few Filipinos have made it to the Navy&#8217;s highest ranks, he and others said.

The Navy first recruited Filipinos in 1898, according to Yen Le Espiritu, a professor of ethnic studies at the University of California, San Diego, who specializes in Philippine history. But from that first year, until 1973, Filipinos were held to steward, supply or other support roles, according to an e-mail from Espiritu.

Even with the restriction lifted, many Philippine sailors continue on that path, Sibal said.

Sibal started his Navy career on the USS Barney as a deck seaman recruit, scraping off rust and slapping on paint. Eventually, he became an electrician. But in those first few months, he remembers, he admired his first chief petty officer and set that rank as a goal.

When he reached it, he looked toward master chief, he said during a phone interview.

For a short time, he said, he considered becoming an officer. He was naturalized as a U.S. citizen in Guam in 1992. He remembers it as one of the most important days in his life. He also decided, soon after that, to stick to the enlisted side of the Navy.

At Sasebo, Sibal spearheaded a community cleanup plan, strengthened the relationship with the Japanese Marine Self- Defense Force and ratcheted up the base&#8217;s Sports Day activities, according to officials there.

&#8220;Sibal infused himself into the community and engaged in community relations at all levels,&#8221; said Capt. Tilghman Payne, the base&#8217;s commander. &#8220;He would lead sailors into town in uniform who would work side-by-side with the JMSDF on community projects. He walks around and talks to people and always offers his help.&#8221;

In a written statement, the commander of the 7th Fleet expressed confidence in Sibal&#8217;s leadership.

&#8220;I&#8217;m convinced that Master Chief Sibal is dedicated to ensuring that the sailors of 7th Fleet understand the critical role each of them has serving as ambassadors of the United States in the Asia Pacific region,&#8221; Crowder wrote.

In the 7th Fleet, Sibal said, he&#8217;d like to work with other U.S. military branches in Japan to develop more standard rules for liberty and curfews. Sailors carry liberty cards that designate what privileges they have ashore, he said. He&#8217;d like to see those overnight policies spelled out in similar ways for all the services.

So many congratulations poured into his Sasebo office the first day news of his new assignment was out, Sibal&#8217;s e-mail temporarily shut down. And while open-door policies abound in the military, Sibal takes it one step further by printing his cell phone number on his business card.

Sibal has one nagging worry.

He&#8217;ll set sail two days after reporting for duty at Yokosuka Naval Base, and he&#8217;s anxious about finding his sea legs. He doesn&#8217;t want his first impression to be turning green in a corner, he said with a laugh.

Stars and Stripes reporters Allison Batdorff and Jeffrey Schogol contributed to this story.

Filipinos and the Navy: A timeline