Figuring out the foreign fighter factor in Iraq 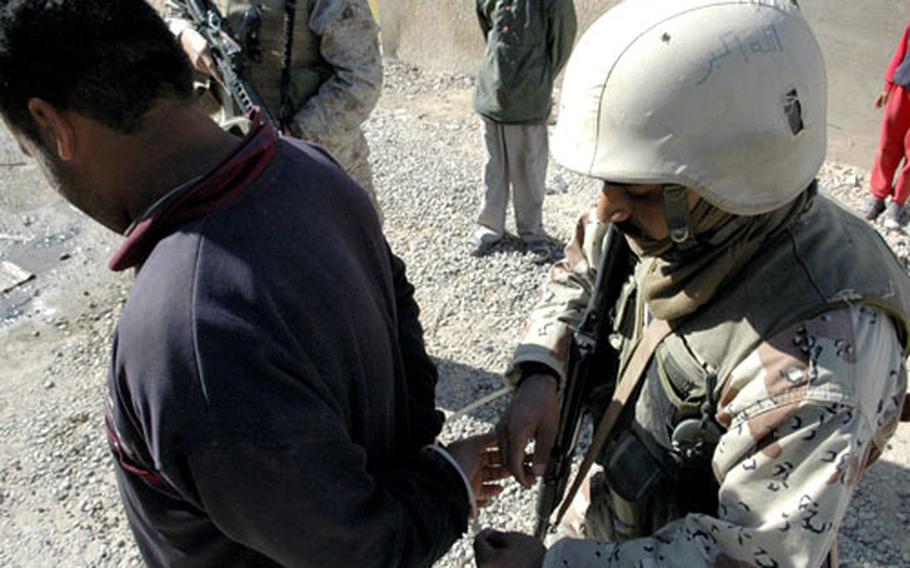 A suspected insurgent is handcuffed by an Iraqi soldier. There is an ongoing debate over the role of foreign fighters from countries like Syria and Saudi Arabia in Iraq’s insurgency. (Andrew Tilghman / S&S)

Editor&#8217;s Note: This is the first in an occasional series exploring myths and realities on the ground in Iraq.

&#8220;Are there foreigners? Yes. Is it that big an influence overall? Probably not,&#8221; Lt. Col. Robert Jones, executive officer for Regimental Combat Team 7, said in a recent interview in his office at Camp Al Asad.

Meanwhile, just a few miles up the Euphrates River, a battalion commander disagrees. &#8220;They are the core,&#8221; said Lt. Col. Nick Marano, commander of the 1st Battalion, 7th Marine Regiment based in the Al Qaim region.

Both men are talking about the same region, and presumably have access to similar intelligence. But they come to different conclusions about the role of Arab fighters from countries like Syria, Saudi Arabia, Yemen and Algeria.

&#8220;The fact you are getting so many conflicting views on the ground just shows what a tangled web of violence this has become,&#8221; said Farhana Ali, a terrorism expert with the Rand Corp., a California-based think tank.

The question is especially relevant in recent weeks, as U.S. military officials scrambled to identify the insurgent leader who would likely take over after the death of Abu Musab al-Zarqawi, the Jordanian-born leader of al-Qaida in Iraq.

U.S. officials pointed to a new man as the probable leader: Abu Ayyub al-Masri, an Egyptian with ties to the international jihadist groups.

U.S. officials say the overwhelming majority of security detainees in U.S.-run Iraqi prisons are Iraqis. Foreigners have never made up more than 5 percent of detainees, U.S. officials have said.

Some troops say the foreign influence is based more on money than actual military-age men.

&#8220;The foreigner is like John Gotti, the foreign influence is money,&#8221; said Lt. Col. Norman Cooling, commander of the 3rd Battalion, 3rd Marine Regiment, currently based in Haditha. Gotti is a New York crime boss who was convicted in 1992 of federal racketeering charges.

&#8220;If I could eliminate the foreign influence, it would have a big impact because the local guy in the street would lose his motivation,&#8221; Cooling said. &#8220;But there are not many foreigners out there operating in the streets. They don&#8217;t have to.&#8221;

It is also influenced by a range of political factors &#8212; both on the Iraqi and American side &#8212; that lead some officials to overestimate the significance of foreign fighters, said Anthony Cordesman, a national security expert with the Center for Strategic and International Studies based in Washington, D.C.

The Iraqis like to blame foreign fighters because &#8220;there is a sort of political climate where Iraqis don&#8217;t want to have a report issued by the coalition forces saying that Iraqis are committing suicide bombs or are the reason for the most dangerous attacks,&#8221; Cordesman said.

Outside Iraq, &#8220;people keep trying to use the fact that there are foreign advisers to advance their own political agenda. If they don&#8217;t like Syria or Saudi Arabia, or somewhere else, they say all the foreign fighters are coming from those countries,&#8221; Cordesman said.

Nevertheless, there is a significant number of foreigners in Iraq.

To some degree, the nationality of insurgents in Iraq is not vitally important, Ali said.

The actual role of foreign fighters in Iraq may never be fully known, considering that thousands of insurgents have been killed in recent years, many with no forms of identification.