Fighting terrorism with training in Mali 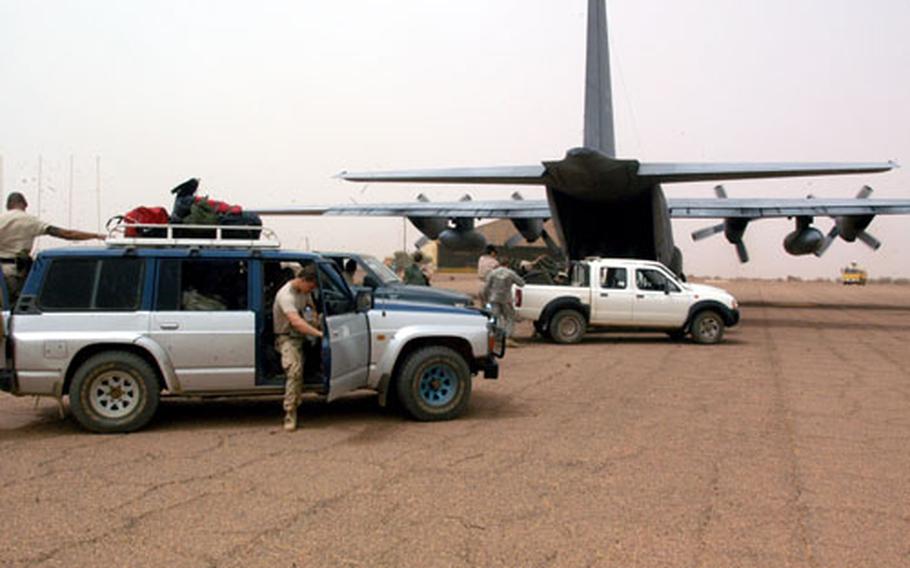 U.S. troops in Goa, Mali, hustle to transfer their gear from trucks to a waiting U.S. Air Force Special Operations C-130. The goal of a current joint operation with Mali is to train its military to secure its borders and fight terrorism. (Bryan Mitchell / S&S)

TIMBUKTU, Mali &#8212; A U.S. Air Force Special Operations C-130 touches down on the desert tarmac and the rear hatch slides open, admitting a wave of overpowering desert heat through the fuselage.

A team of roughly 20 troops scurry to transfer their goods from a fleet of rented pickup trucks into the belly of the aircraft that will ferry them out of this mythical landscape.

The aircraft&#8217;s propellers don&#8217;t cease rotating during the lightning-quick operation. The wind combined with the 120-degree temperature creates a ruthless furnace, scorching one troop&#8217;s sandals so quickly his feet begin to burn.

A similar scene unfolded an hour earlier in the equally meteorologically challenged city of Goa in the eastern half of this desolate country, where the plane picked up supplies.

The plane is loaded with a combination of Special Forces soldiers, civil affairs reservists and military physicians anxious to return home to cooler climes.

Capt. Eddie, a member of the 1st Battalion, 10th Special Forces Group, based out of Stuttgart, Germany, just completed his third tour in Mali, where he is tasked with training the local military and providing a safe environment for the physicians and civil affairs specialists to administer humanitarian assistance.

&#8220;Every time we come down here [the Malians] are always nice and good to work with,&#8221; Capt. Eddie said as the plane climbed above the desert en route to the capital of Bamako.

Sitting beside the West Point graduate on the sweltering C-130 is Capt. Kevin, an eighth-grade history teacher in Massachusetts who, as an Army reservist, traded a middle school graduation ceremony for a six-week tour in one the world&#8217;s most isolated nations.

&#8220;Many of the locals are surprised to see the U.S. Army involved in host nation development,&#8221; said Capt. Kevin, who serves with a Rhode Island Army Reserve unit.

The two officers are part of a joint operation called the Trans-Sahara Counter Terrorism Initiative, in which the United Kingdom-based Air Force 352nd Special Operations Group provides air support to ground forces. It is one front in what the military calls the Global War on Terror.

The Department of Defense is slated to receive $200 million annually for the next two years to train and outfit foreign militaries as part of the $513 billion 2007 Defense Authorization Bill, according to the Congressional Research Office.

Unlike the Pentagon&#8217;s campaigns in Afghanistan and Iraq, the missions in northern Africa are limited to small numbers of troops &#8212; primarily Special Forces &#8212; who focus on training the local military to police their own countries.

The hope is for the countries to become sufficient in securing their borders and interior to deny sanctuary to terrorists looking to hide or possibly set up training facilities in an area roughly 50 percent larger than the continental United States, according to the 352nd&#8217;s deputy commander, Col. Brian Cutts.

&#8220;This is where we need to be right now, helping these countries become more capable in their abilities at the same time building relationships that will have both short- and long-term rewards,&#8221; Cutts said.

Training the local militaries and delivering humanitarian aid may be the domain of the military, but it does not occur without the participation of the U.S. State Department, which facilitates all combined exercises in Africa.

The thrust of training the Malian government includes airport security, hostage negotiation, explosives training and combating terrorism financing, according to Steve Kraft, deputy chief of mission at the U.S. Embassy in Mali.

Size: About 470,000 square miles, approximately three-quarters the size of Alaska

Language: Official is French, but Bambara is largely spoken on the streets.