Fighting on two fronts in Mosul 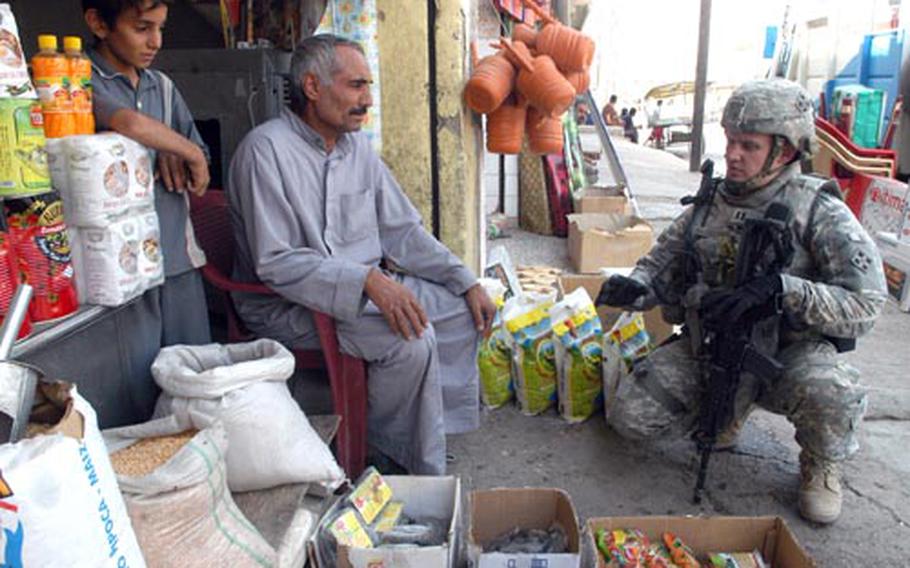 Capt. Alexander Rasmussen, commander of Company D, 1st Battalion, 8th Infantry Regiment, speaks to a small-business owner during an operation on Wednesday. U.S. and Iraqi soldiers are waging a two-headed fight in the city with security and reconstruction operations geared toward stabilizing the region. (Sean Kimmons / S&S)

Capt. Alexander Rasmussen, commander of Company D, 1st Battalion, 8th Infantry Regiment, speaks to a small-business owner during an operation on Wednesday. U.S. and Iraqi soldiers are waging a two-headed fight in the city with security and reconstruction operations geared toward stabilizing the region. (Sean Kimmons / S&S) 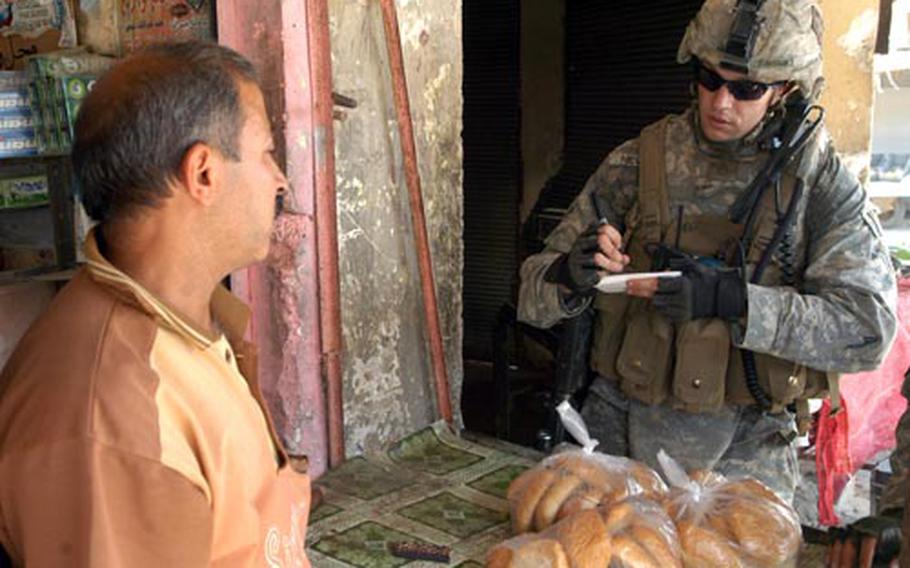 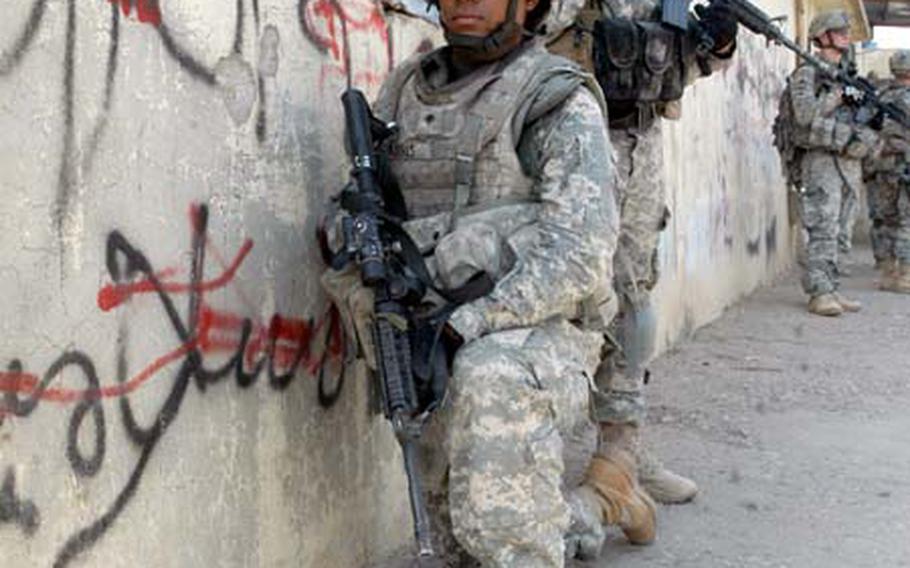 Spc. Cortez Harris, front, and Staff Sgt. Tim Briggs, both with Headquarters and Headquarters Company, 1st Battalion, 8th Infantry Regiment, stand next to a wall with insurgent graffiti that has been spray-painted over while providing security for other soldiers talking to business owners. (Sean Kimmons / S&S) 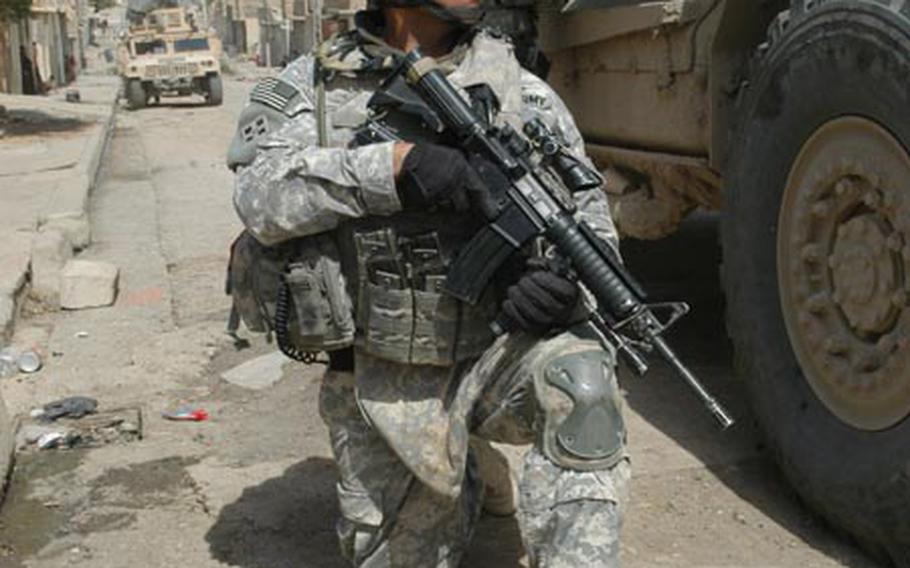 Spc. Jesus Ortega, from Headquarters and Headquarters Company, 1st Battalion, 8th Infantry Regiment, provides security during an operation on Wednesday. U.S. and Iraqi soldiers are waging a two-headed fight in the city with security and reconstruction operations geared toward stabilizing the region. (Sean Kimmons / S&S)

MOSUL, Iraq &#8212; It&#8217;s a two-headed fight in Mosul. One goes after insurgents, the other hopes to boost a struggling economy. The ultimate goal of this dual fight is to stabilize a city that has been called al-Qaida in Iraq&#8217;s last urban stronghold.

Though capturing bad guys is at the forefront of military operations, preventing Iraqis from turning to insurgency in a city with a 75 percent unemployment rate due mainly to the absence of reconstruction money is also key.

U.S. and Iraqi soldiers approached small businesses to not only probe owners about security in the area, but also to look for candidates for micro-grants, a one-time payment that doesn&#8217;t have to be paid back.

Funded by Iraqi money, the micro-grant program is used by U.S. military units to give deprived businesses "a little push off the ground," said Maj. Mike Edwards, the battalion&#8217;s executive officer.

In June, the battalion began handing out the micro-grants, typically for $2,500 each. So far, the unit has found only four suitable recipients. Edwards explains that it takes time to know the neighborhood and owner to see if the grant can benefit the community.

Gaining the trust of locals has been arduous.

He blames the insurgents&#8217; intimidation of the Iraqis for keeping them tight-lipped.

"They are scared to talk," said Muhammad.

Unemployment is the No. 1 reason for the insurgency in Mosul, he said. Many of the homes that his soldiers search belong to poor families. And most of the insurgents caught are between the ages of 15 and 20 years old.

"The terrorists take advantage of the young people," Muhammad said.

ReconstructionThe deputy governor of municipalities, Muhammad Hussein, is an elected official in Nineveh province with the hard task of reconstructing Mosul. Basic services continue to suffer, buildings leveled by ongoing fighting dot the landscape and numerous roads are in need of repair.

Nineveh province, of which Mosul is the capital, has seen only a fraction of its entitled reconstruction funds from Iraq&#8217;s central government, Hussein said.

"I wish we could get the complete funds, but it depends on the economic and security situation," he said through a translator. "If I had the funds to start projects, I could make Mosul a much better place."

For now, he can only authorize a few projects.

"We get limited funds, so we do limited projects," Hussein said.

"The projects stop because of no funds," Jamshiit said through a translator.

"They only give us 20 percent of the budget now," Jamshiit said. "There&#8217;s not enough money for projects to be completed."

Mosul has received $39 million in reconstruction funds through the Iraqi Commander&#8217;s Emergency Relief Program, or ICERP, a system that uses Iraqi money for projects instead of U.S. money as in the past, soldiers said.

Yet the province is waiting for hundreds of millions of dollars from Iraq&#8217;s central government, said Maj. Thomas Feltey, 37, of Kearny, N.J., the executive officer for 3rd Squadron, 3rd Armored Cavalry Regiment, a unit that also works in Mosul.

"In general, there&#8217;s a lot of frustration in the local populace on reconstruction," Maj. Tony Vacha, a team chief in Company C, 415th Civil Affairs Battalion, said. He recently visited Hussein to let him know that a project to pave a dirt road in eastern Mosul has been approved through ICERP.

Since June, Vacha and Iraqi elected officials have agreed on five ICERP projects. Three are still awaiting approval, he said.

Vacha hinted that corruption and a lack of government know-how could be some of the reasons for local government troubles. "There&#8217;s so much under the surface that we don&#8217;t see," he said.