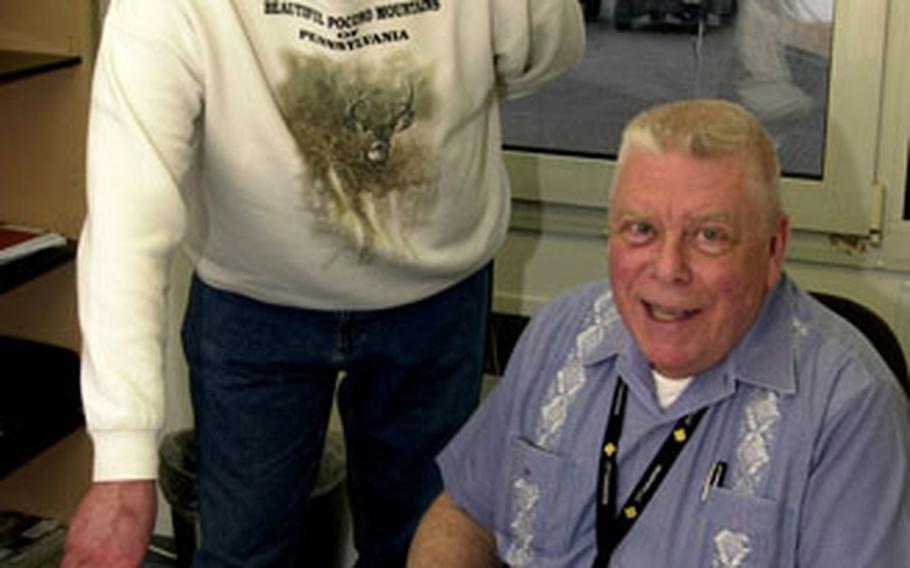 Edward Kopsick, left, and Charles Kotyrba, like a lot of Americans in Germany, have fought a round with Deutsche Telekom, the largest telecommunications company in Europe. Unlike most Americans, they won, getting refunds after billing and service snafus. (Terry Boyd / S&S)

Unfortunately, it&#8217;s also predictable that sooner or later, some will find themselves at odds with Deutsche Telekom, Europe&#8217;s largest telecommunications company.

A number of Germany-based Department of Defense employees have told Stars and Stripes about overbilling and service problems. Many have given up trying to resolve them, worn down by corporate stonewalling.

Others, however, have fought back.

Kopsick and others say Deutsche Telekom made significant billing or service errors, then refused to correct them or make refunds. For that reason, consumers should be monitoring their bill scrupulously, they say.

Compared to how business is done in the U.S., with its emphasis on consumer rights and satisfaction, &#8220;yes, there is a problem, from the German point of view,&#8221; Hans Lichtenth&#228;ler said.

In fact, his company has an ongoing initiative to change the corporate culture and become more customer friendly. &#8220;We&#8217;re trying very hard to do that,&#8221; he said.

Deutsche Telekom has been sued for a number of its practices, including a 2005 legal action brought by the German Association of Consumer Protection. That suit charged that Deutsche Telekom telemarketers changed customers&#8217; accounts although the customers had only agreed to accept advertising materials. Lichtenth&#228;ler said it was contractors, not Telekom employees, who made the changes to gain illicit commissions. (In the interest of full disclosure, a couple of Stars and Stripes employees have either won disputes against Deutsche Telekom or its wireless subsidiary, T-Online, or have current claims against the company.)

Ultimately, Deutsche Telekom and T-Online will correct problems and even settle claims &#8212; but customers need to be patient and persistent, Kopsick said.

Kopsick said his problems started after his boss told him he had called T-Online&#8217;s customer service number and negotiated a lower rate. The tendency, Kopsick said, is for American military personnel in Germany to go to the base and sign up for the straight phone and Internet package, which costs about 26 euros per month.

It turned out T-Online service reps had signed up Kopsick for a second line he says he didn&#8217;t know about but had been paying for for three years to the tune of about an extra 1,800 euros.

&#8220;Forget it,&#8221; was T-Online&#8217;s response, he said. Even after T-Online records showed he had never used the second service, T-Online employees refused to reimburse him.

And thus began a two-month e-mail exchange &#8212; mostly in German &#8212; between Kopsick and T-Online, with customer-service reps refusing to reimburse him because he didn&#8217;t cancel the second line until November 2005, when he found out about the double billing.

Neither would his friend Chuck Kotyrba, a former Army officer working as a technician in Kaiserslautern for military contractor ITT Industries. Kotyrba signed up for Deutsche Telekom cellular phone service in 2004. He quickly discovered if his prepaid balance dropped below, say, 50 euros, he could only make calls on weekends.

Kotyrba tried to tell T-Online customer service staff that he didn&#8217;t want such a service. He switched to the British-based Vodafone PLC and asked T-Online to refund the 37-euro credit remaining on his account. The company refused.

Ultimately, both men got their money. But it took Kotyrba five months, Kopsick two.

Both agree they learned that to get results, you must go straight to the top.

Kotyrba sent that e-mail to company executives with a note &#8220;that this is the kind of customer service your company is providing. And you wonder why people are not happy.&#8221;

Ultimately, it was Rainer Beaujean, a general manager at Deutsche Telekom&#8217;s headquarters in Darmstadt, who got Kopsick his 1,800 euros.

Kopsick said he came away from his fight convinced that everyone &#8220;should check phone bills to include Internet; call T-Online to negotiate a cheaper rate because of [growing] competition. And if all else fails, check another provider.&#8221;

Getting away from Deutsche Telekom is virtually impossible because it owns most of the phone and Internet architecture in Germany, as well as much of the cellular system. However, there is an increasing number of competitors, both cell phone companies and Internet provider services. Kopsick now uses FreeNet, an Internet-based service, for 9.90 euros per month.

Lichtenth&#228;ler said all he can hope is that customer pressure will make his company better.

You do have other Web options

Fed up with your Internet service? T-Online isn&#8217;t the only game in town, and many times it&#8217;s not even the cheapest. A look at some less-expensive alternatives: