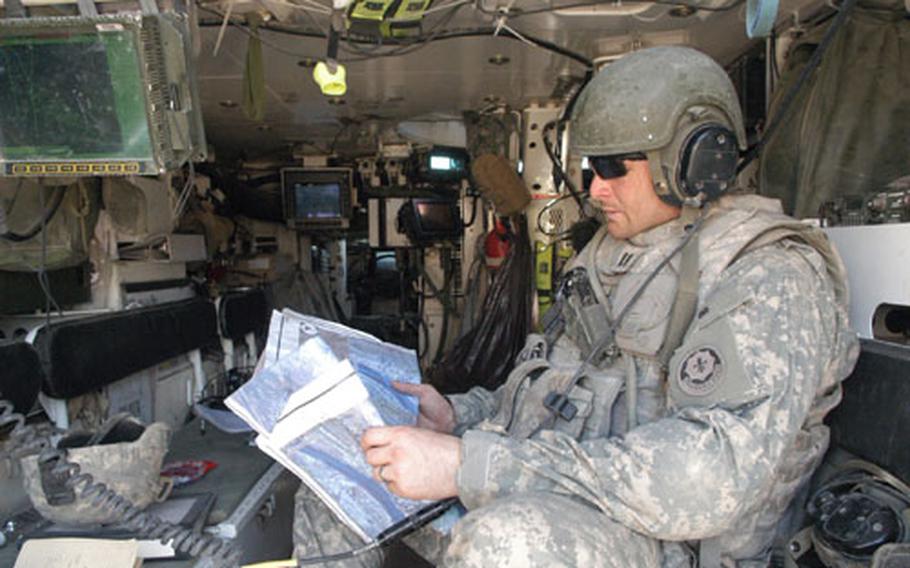 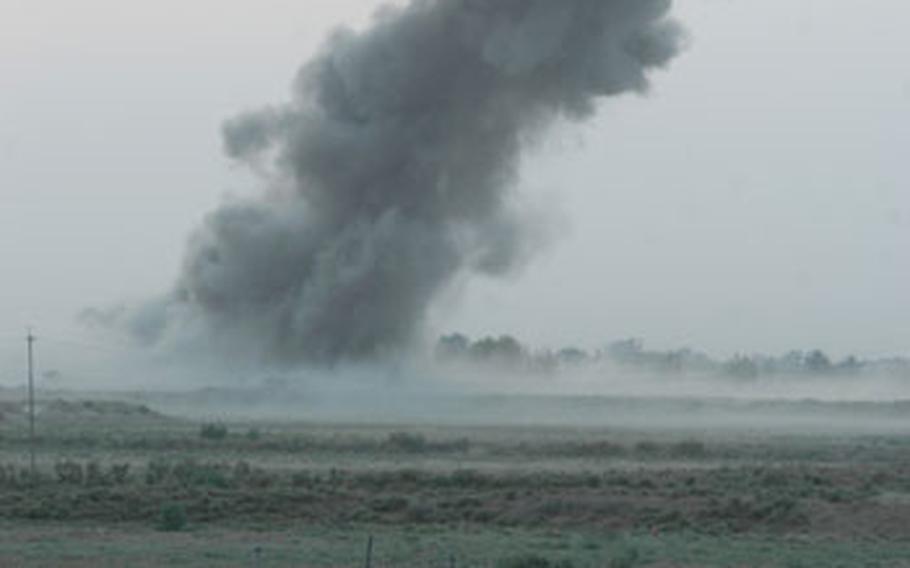 A Stryker sits in the foreground as a plume of dark smoke from a 500-pound bomb blast rises into the air during a clearing operation in Bya’a in southern Diyala province. (Sean Kimmons/S & S)

BYA&#8217;A, Iraq &#8212; The "Husky" mine-clearing vehicle rolled into this southern Diyala province village as one hefty piece of machinery. Hours later, it was towed out in damaged sections by a recovery team.

Two mines destroyed the vehicle as it was freeing up a passage within this small village on the Tigris River.

Nearby, numerous roadside bombs and booby-trapped homes rigged with homemade explosives were found. It turned out that the abandoned village of roughly 30 homes was heavily fortified with bombs believed to be planted by fleeing al-Qaida in Iraq fighters.

Houses laced with explosives have delayed U.S. and Iraqi forces from pushing south into areas where coalition presence has been nonexistent in past years. Main roadways are also peppered with roadside bombs, adding to the slowdown in an operation launched two weeks ago.

Rather than jeopardize lives, leadership from the U.S. Army&#8217;s 2nd Squadron, 2nd Stryker Cavalry Regiment decided to pull back its troops and fight bombs with bombs.

The clearing duties were part of Operation Dragoon Pursuit &#8212; the 2nd Cavalry&#8217;s share of an Iraqi-led offensive dubbed "Good Tidings of Benevolence." More than 30,000 Iraqi security forces are said to be involved.

The goals are stability in the region and helping local government rebuild in a province recently plagued by suicide bombers.

Last week, a home exploded near Bya&#8217;a that wounded four U.S. troops and killed one Iraqi Army soldier and wounded three others.

"The worst thing we can do is be in a hurry," Lt. Col. Myron Reineke, the 2nd Cavalry&#8217;s commander, recently told a group of Iraqi commanders. "It&#8217;s better to do it right than fast, where more could get injured."

The 2nd Cavalry, out of Vilseck, Germany, is all too familiar with the explosive devices, commonly made from nitrate-based explosives like fertilizer.

At least seven of its soldiers have already been killed by exploding homes this year. Six of them perished during one incident in January.

Martin and others sensed there could be trouble in Bya&#8217;a. When his troops arrived in their Stryker armored vehicles, Bya&#8217;a was a ghost town surrounded by a belt of roadside bombs.

As much as 60 percent of the village&#8217;s homes had signs of booby traps, including trip wires, crush wires, pressure plates and 55-gallon drums placed against buildings.

Martin, 31, of Sacramento, Calif., estimates that his unit has encountered about 50 house and roadside bombs in less than two weeks within his sector.

Though residents may someday return to Bya&#8217;a, it was deemed too dangerous to save many of the homes. Martin said the Iraqi government has taken ownership of the continuing issue of displaced Iraqis in Diyala by setting up restitution funds.

"This was unlike anything we&#8217;ve ever seen," Martin said of the bomb-infested village. "It&#8217;s a complicated situation. [But] we&#8217;ve determined that saving houses did not outweigh the casualty risk."

Air Force Staff Sgt. Jesse Montez, 31, of Denver, and his explosive-trained German shepherd, Britta, were ready to clear the village until his Army counterparts chose to use the F-16s to drop bombs instead.

He then couldn&#8217;t resist the chance to poke fun at the Army.

The bombing campaign was the first to be seen by Pfc. Jeremy Stevenson, a Palehorse troop medic.

"I think they should bomb the hell out of the place," he said after a bomb exploded a half mile away, followed by a concussion wave. "If not, you&#8217;re just putting people&#8217;s lives in danger for no point."