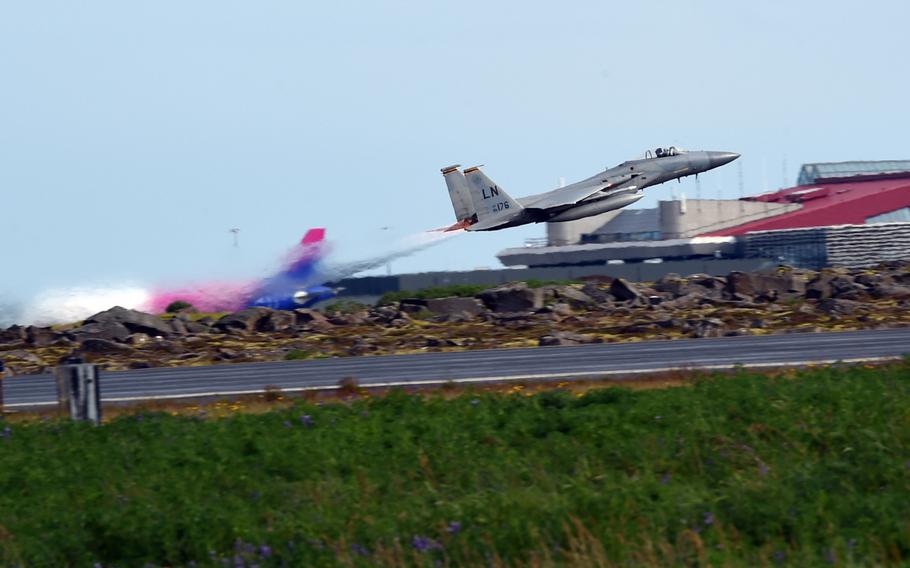 Buy Photo
An F-15C fighter jet takes off during one of the U.S. Air Force's mock scrambles during an Iceland Air Surveillance mission at Keflavik, Iceland, Wednesday, Aug. 15, 2018. (Martin Egnash/Stars and Stripes)

Buy Photo
An F-15C fighter jet takes off during one of the U.S. Air Force's mock scrambles during an Iceland Air Surveillance mission at Keflavik, Iceland, Wednesday, Aug. 15, 2018. (Martin Egnash/Stars and Stripes) 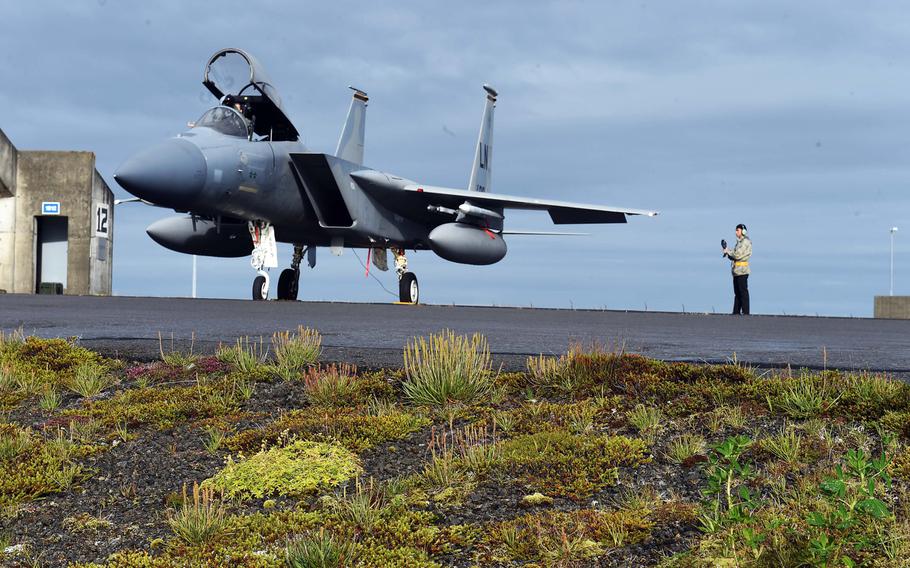 Buy Photo
An F-15C fighter jet on a runway in Keflavik, Iceland, while airmen prep the aircraft for the Iceland Air Surveillance mission, Wednesday, Aug. 15, 2018. (Martin Egnash/Stars and Stripes) Buy Photo
One of the hangars the U.S. Air Force used during the Iceland Air Surveillance mission, in Keflavik, Iceland, Wednesday, Aug. 15, 2018. (Martin Egnash/Stars and Stripes) 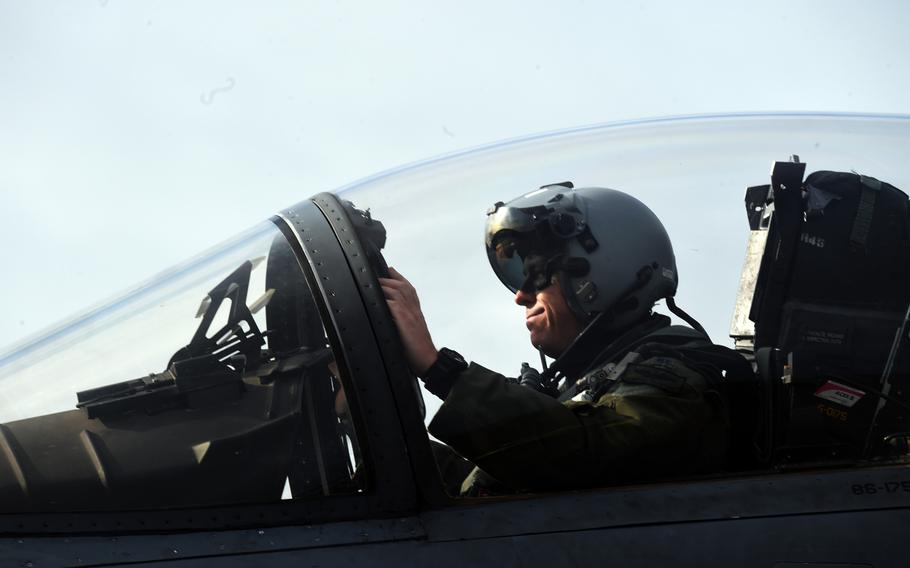 KEFLAVIK, Iceland — After lots of flying, bundling up in summer and trying local delicacies like putrefied shark and puffin, the U.S. Air Force wrapped up its three-week air surveillance mission in Iceland on Thursday.

The mission brought about 300 airmen and 14 F-15C/D fighter jets from the 493rd Fighter Squadron, 48th Fighter Wing, based in RAF Lakenheath in the U.K., to the small island nation, where they provided 24/7 coverage over NATO’s northern border.

Iceland was a strategically vital during the Cold War, when pilots watched for incursions into NATO airspace from the Soviet Union. It was at the center of the so-called GIUK Gap, a naval chokepoint between Greenland and Britain through which Soviet submarines had to pass to reach America’s Eastern Seaboard.

Tensions with Russia, following its 2014 Annexation of the Crimean Peninsula, have brought increased NATO attention to the North Atlantic island nation.

“However, the (surveillance) mission is conducted regardless of Iceland’s strategic importance at any given time. It is a peacetime collective defense mission, safeguarding the integrity of the NATO airspace,” he said.

Military activity in Iceland dropped off significantly after the U.S. closed its permanent bases in 2006.

Iceland is the only member of NATO that does not have its own armed forces, save for a coast guard concerned more with the safety of fishermen.

“We joke about being the largest military presence in Iceland, but their coast guard has a big presence here,” said Lt. Col. Cody Blake, the squadron’s commander. “They make it feel like we’re not the biggest military here.”

This air policing mission gives the small NATO ally a level of aerial security that it would otherwise not have on its own.

“Iceland’s membership to NATO as well as the bilateral defense agreement with the U.S. are the cornerstones of Iceland’s defense strategy,” Gudmarsson said, citing the U.S. squadron’s ability to intercept potential enemy aircraft.

U.S. pilots practiced hopping in their jets on short notice and checking out simulated threats above Iceland’s skies throughout the exercise.

As the last stop before North America, the U.S. could intervene over Iceland if a non-NATO military aircraft flew into the area. They could also take on civilian air policing duties—for example, in a scenario such as when a mechanic took off with a stolen plane from Seattle-Tacoma International Airport and crashed in Puget Sound earlier this month.

“Hypothetically, if what happened in Seattle happened here, we would most likely be the ones called to scramble our jets and intercept the aircraft,” Blake said. “When that happens, that usually means we fly close to the aircraft to make visual confirmation of it, to relay vital information back to the ground.”

In addition to their primary surveillance duty, the airmen conducted mock aerial battles around the island’s airspace, giving priority to junior pilots in need of experience commanding groups of fighters.

“Being a younger guy here, I basically fly every day,” said a pilot identified only by the call sign “Vice” because the Air Force did want him to be named. “It’s amazing to be flying, and looking down to see these huge glaciers, or bright blue lakes next to mountains.”

When the airmen weren’t working, they explored Iceland, visiting black-sand beaches and the capital, Reykjavik.

Some of the Americans tried Iceland’s specialty dishes. Vice said he tried both whale and puffin, a cute black-and-white bird with a colorful nose.

“They were on the menu so, I got them,” Vice said. “Whale was great. More like a steak than fish. Very mammaly. The puffin didn’t have a lot of flavor itself; it just took on the sauces it was served with.”

At the time of the interview, Vice had not yet tried the most infamous dish on the island, putrefied shark, but planned on having it soon.

Putrefied shark, known as hakarl, he explained, is Greenland shark fermented for up to six months.

The airmen who did try hakarl described it as tasting exactly like it sounds. Like rotten fish, in your mouth.

Thankfully, the rest of the deployment left a better taste in their mouths.

“It’s been a great experience for us here in Iceland,” he said. “The Icelandic people seem to really appreciate what we’re doing here.”