Fight night in the desert A left from Antone Dillard glances off the head of Brian Richards during Friday night fights at Camp Speicher near Tikrit, Iraq. (Jason Chudy / S&S)

A left from Antone Dillard glances off the head of Brian Richards during Friday night fights at Camp Speicher near Tikrit, Iraq. (Jason Chudy / S&S) Soldiers and civilians from Camp Speicher watch the first of three matches at the Company, A 404th Aviation Support Battalion, boxing ring. Soldiers from the unit built the ring out of material scavenged from a scrap yard. (Jason Chudy / S&S) 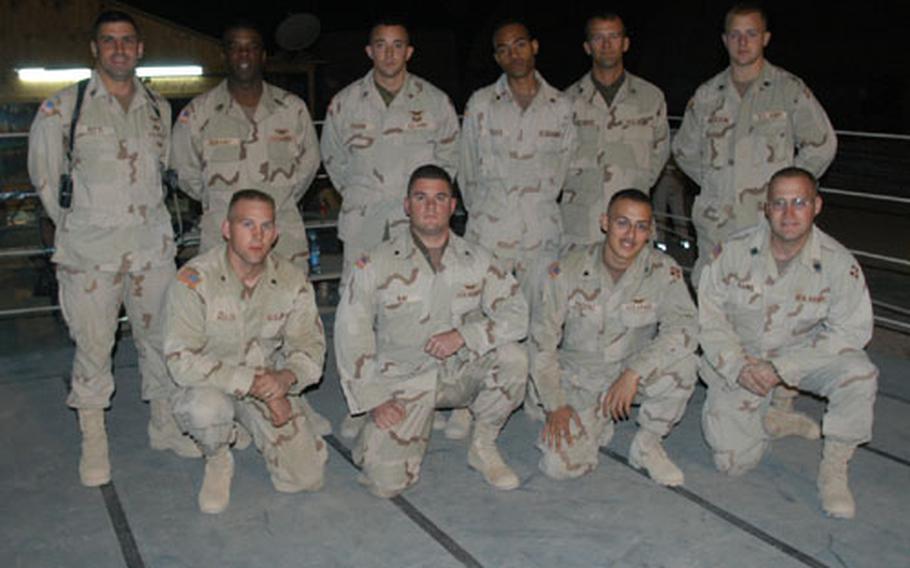 It may have been Halloween, but forget trick-or-treating. It was boxing night on Camp Speicher.

For the past six weeks, soldiers from Company A, 404th Aviation Support Battalion have held Friday night boxing matches near their compound on the western side of this former Iraqi air base.

Battalion officials have estimated more than 600 at earlier fights.

It&#8217;s not Las Vegas or Atlantic City, but they make it as close as possible. The beer&#8217;s alcohol-free but plentiful, the cigars are usually Cuban, the round card girl wears an Army brown T-shirt and desert utility pants.

On this evening, six soldiers climbed into the ring for three minute-long rounds of stress relief and crowd-pleasing action.

In the final match, 188-pound Antone Dillard won the decision from the 180-pound Brian Richards.

It&#8217;s not just a male-dominated event, either. Williams coaches four female soldiers, and they&#8217;ve even fought in previous weeks.

Many of the soldiers hadn&#8217;t fought before arriving in Iraq, and Williams said as the training progresses the fights are safer.

But the majority of the fighters and crowd leave happy.

If you build it, they will come. Who said that only works in movies?

Soldiers from Company A, 404th Aviation Support Battalion built a boxing ring out of junk they salvaged from a scrap yard.

&#8220;The hardest thing was getting the supplies,&#8221; said Pacero. The soldiers scrounged junked tires from 5-ton trucks and metal Air Force pallets for the floor and then built from there. They added padded corner poles and side ropes tightened and braced in.

When they finished, the floors were firm and the ropes springy but strong enough to support a fighter&#8217;s weight.

Once the ring was in place, they realized that there was more to boxing matches.

Staff Sgt. Brian Pridemore stepped in as emcee, announcing each evening&#8217;s card and filling time between matches with public service announcements. Spc. Mason Truss and Spc. Nathan White jump in to take care of the sound equipment and music.

They even get different soldiers or civilians to serve as judges.

Finally, there&#8217;s referee Jimmie Jordan who smiles as he climbs into the ring, even though the crowd boos as his name&#8217;s announced.

Booed, that is, by the hundreds of people gathered at A-404&#8217;s boxing ring for Friday night fights.