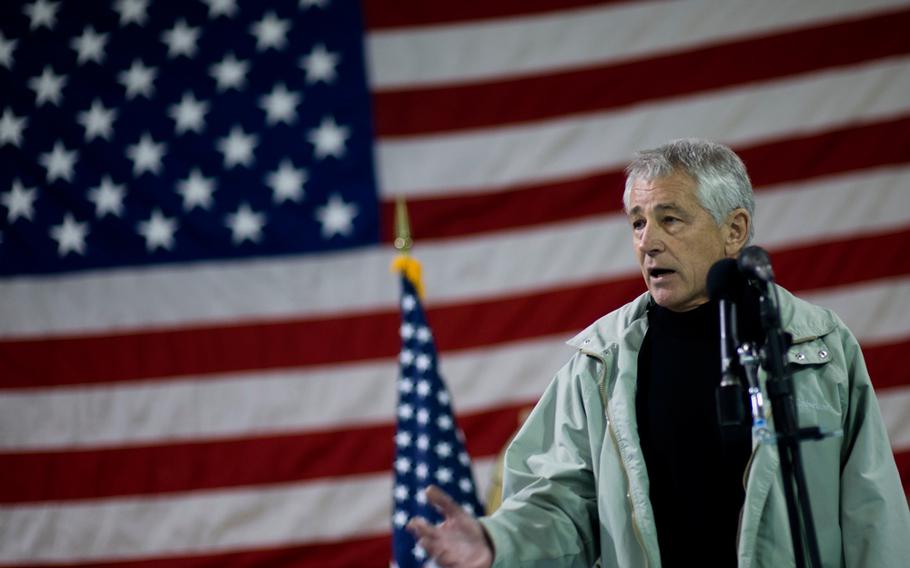 U.S. Defense Secretary Chuck Hagel speaks to troops and officials at Camp Leatherneck in the Helmand province of Afghanistan, Dec. 8, 2013. (Erin A. Kirk-Cuomo/DOD)

U.S. Defense Secretary Chuck Hagel speaks to troops and officials at Camp Leatherneck in the Helmand province of Afghanistan, Dec. 8, 2013. (Erin A. Kirk-Cuomo/DOD) 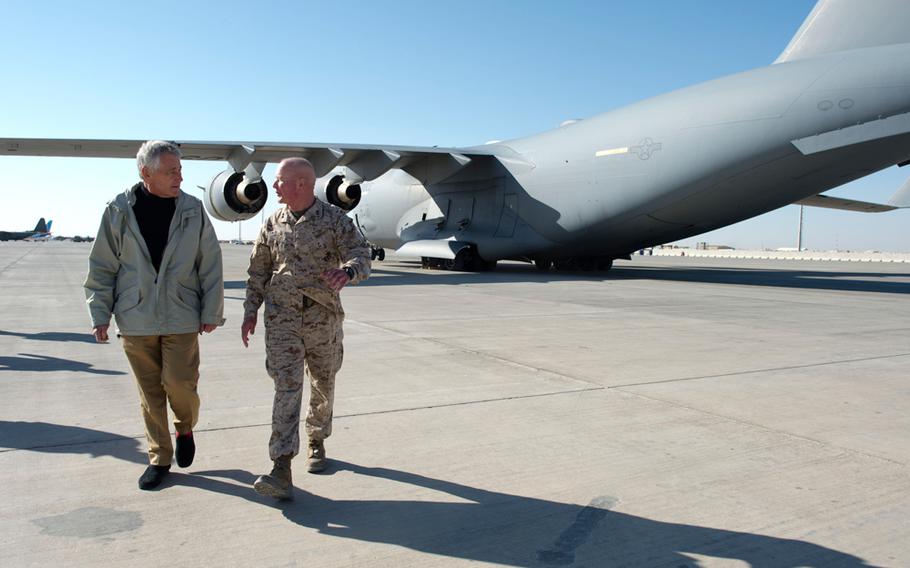 Hagel’s first meeting was with the new chief of Pakistan’s powerful army, Gen. Raheel Sharif, who was elevated to command late last month, in the garrison city of Rawalpindi. Hagel later headed to nearby Islamabad to confer with top civilian officials, including Prime Minister Nawaz Sharif, who took office in June, and Minister of Defense Khawaja Asif.

It is the first visit to Pakistan by a U.S. defense secretary since Robert Gates came in January 2010.

Sharif is serving his third stint as prime minister. His second term ended in a military coup in 1999, and he has clashed with the influential Supreme Court, too, so there are questions about his ability to forge any kind of consensus on even the most basic issues in the divisive, poverty-wracked Muslim country.

Among the daunting economic and political challenges he faces after moving back into power after years as a top opposition leader are Pakistan’s support for the U.S. war on terrorism and the difficulties of rooting out Islamic extremists in the lawless tribal areas along the border with Afghanistan that have been the site of numerous deadly drone strikes in recent years.

Senior U.S. defense officials, speaking on condition of anonymity before the meetings, said Hagel planned to acknowledge the support Pakistan has provided in the U.S. war on terror, including the many casualties suffered both by civilians and security forces.

Hagel would also stress the need for improved relations between Pakistan and Afghanistan, and the importance of Pakistan continuing to battle insurgents in the tribal areas, officials said. Washington and Kabul have long cited the elimination of terrorist havens in Pakistan, from which insurgents launch cross-border operations, as one of the keys to pacifying Afghanistan.

Both the United States and Pakistan are serious about fighting terrorism, the defense official said, but their priorities don’t line up completely.

“It’s clear that the United States has been leading a counterterrorism campaign designed to primarily deal with the threats to our country, to our people, our interests, our allies and to our forces overseas,” the official said. “In Pakistan, it’s been a very different group that’s posed the greatest threat.”

Hagel and Pakistani officials would try to develop a common definition of extremism and terrorism that suits both nations’ interests, the officials said. He would also push for better border management, to prevent groups in Pakistan from attacking Afghanistan and vice versa.

Hagel also planned to stress the importance of keeping land routes through Pakistan open to U.S. and coalition military traffic. The routes are key to the U.S. retrograde effort to remove equipment from Afghanistan by the end of formal combat operations on Dec. 31, 2014.

Pakistan closed the routes after a deadly border battle between U.S. and Pakistani troops in late 2011, but formally reopened them in July 2012.

The effort to increase their use — a far cheaper way of moving war materiel out of Afghanistan than air transport — was complicated last week when protesters angry about U.S. drone strikes on insurgent targets in Pakistan led U.S. officials to halt traffic at a major border crossing, the Torkham Gate, to protect drivers and their cargo. No U.S. traffic has passed through the gate in December, officials said.

In the midst of a five-country trip to the Middle East and Southwest Asia, Hagel traveled to Pakistan after two days visiting troops and meeting officials in Afghanistan. He was scheduled to continue on to Saudi Arabia and Qatar later Monday.