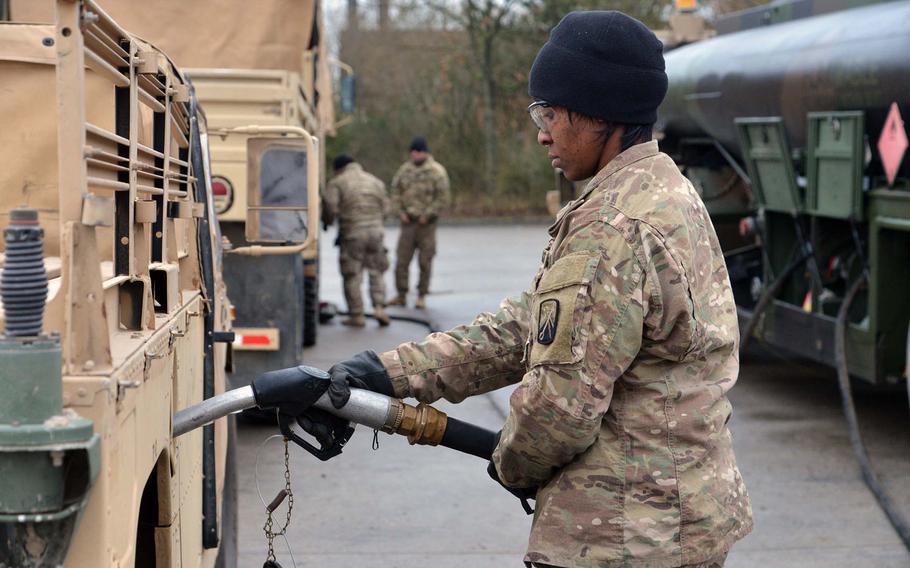 Buy Photo
Staff Sgt. Priscella Gray of the Baumholder, Germany-based 515th Transportation Company fuels up a Humvee that had convoyed from Bremerhaven, Monday, Jan. 9, 2017. On the way to Poland, the convoy ended its first day at a training area near Belsen, Germany. (Michael Abrams/Stars and Stripes) Buy Photo
Military policemen check out their Humvees after arriving at a training area near Belsen, Germany, on their way to Poland from Bremerhaven, Germany, Monday, Jan. 9, 2017. (Michael Abrams/Stars and Stripes) 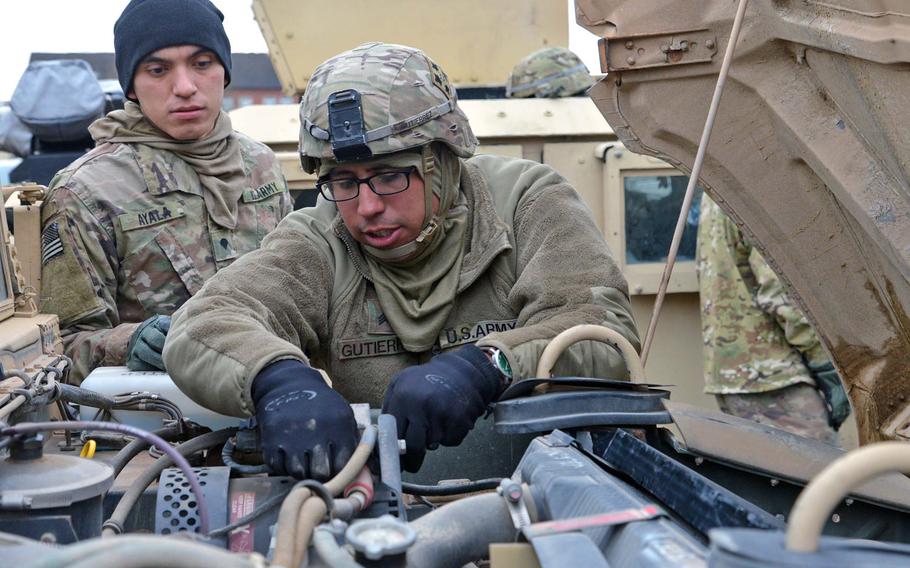 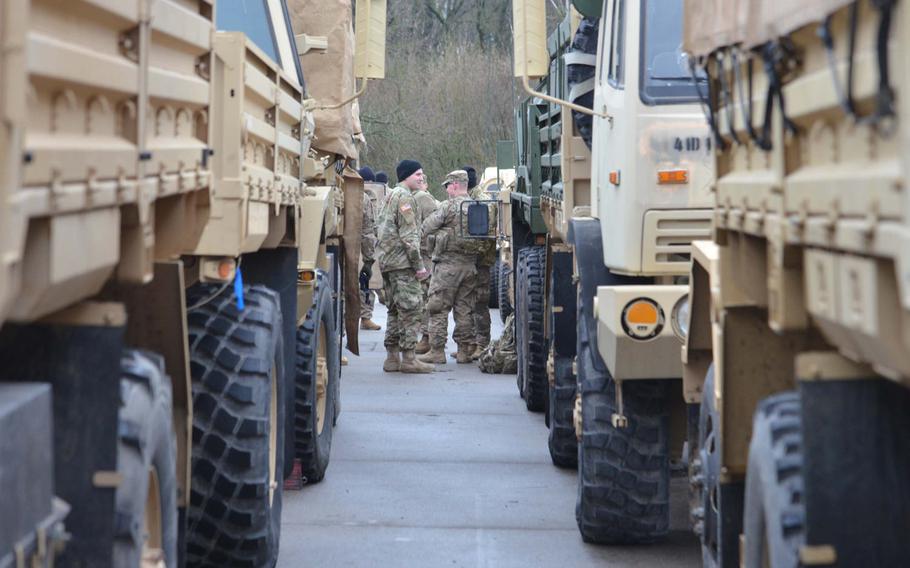 Buy Photo
Soldiers talk after arriving at a training area near Bergen, Germany, after convoying from Bremerhaven on their way to Poland as part of Operation Atlantic Resolve, Monday, Jan. 9, 2017. (Michael Abrams/Stars and Stripes) Buy Photo
A convoy of vehicles of the 3rd Armored Brigade Combat Team, 4th Infantry Division arrives at a training area near Bergen, Germany, after driving from Bremerhaven on the way to Poland, on Monday, Jan. 9, 2017. The convoy is scheduled to arrive in Poland on Thursday. (Michael Abrams/Stars and Stripes) 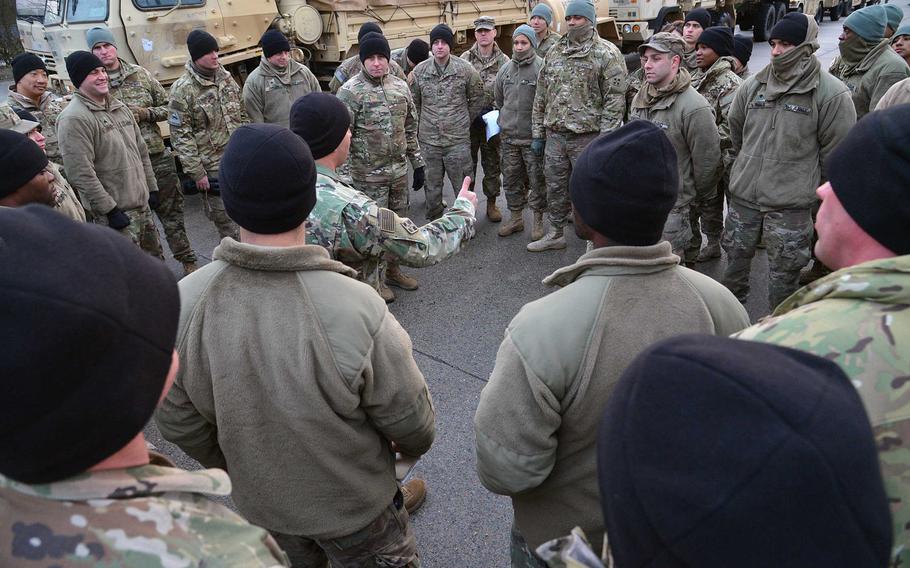 Buy Photo
Soldiers of 3rd Armored Brigade Combat Team, 4th Infantry Division have a mission briefing before heading out on the second day of a convoy to Poland on Tuesday, Jan. 10, 2017. (Michael Abrams/Stars and Stripes) Buy Photo
A convoy of vehicles of the 3rd Armored Brigade Combat Team, 4th Infantry Division drives along Autobahn A7 near Hannover, Germany, Tuesday, Jan. 10, 2017, on the way to Poland. (Michael Abrams/Stars and Stripes)

BERGEN, Germany — Sgt. Kevin Gutierrez and a group of Army mechanics were under the Humvee hood, trying to work magic while the rest of the convoy of Fort Carson, Colo.-based infantrymen waited for the word go.

“You hear that?” said Gutierrez after 40 minutes of jimmying.

While Sgt. Luis Narvaez pressed a plank on the exhaust to belch back more compression into the engine, another soldier turned the ignition, again and again, and then click.

“Let’s go,” said Capt. Bill Whelan, leading a convoy of troops with the 1-8, signaling it was time for the team to move out from a German barracks in Bergen, bound for Poland.

As part of the Iron Brigade’s push from Fort Carson to bases across NATO’s eastern flank, mechanics are working overtime to keep the many convoys going, a key cog in one of the largest U.S. troop mobilizations in Europe since the end of the Cold War.

For the 3rd Brigade’s 3,500 troops, the nine-month deployment to Europe has been a year in the making, with months spent training to sharpen their combat skills and just as much time solving the logistical riddle of moving 87 tanks and about 2,500 other military vehicles across continents and an ocean.

The move, part of the ongoing Operation Atlantic Resolve, is the latest in a series of measures in response to Russia’s 2014 military intervention in Ukraine, which has unsettled the post-Cold War security order in Europe.

For EUCOM and the U.S. Army in Europe, the arrival of the 3rd Brigade is a culminating moment in its two-year effort to rebuild U.S. military power on a continent where it had been in steady decline for the past 25 years. Now, the plan is for the Army to conduct back-to-back rotations of a tank brigade, ensuring a year-round presence of armor to complement two other Army brigades stationed full time in Europe.

However, the deployment also comes during the last days of the Obama administration and a time of uncertainty about the geopolitical direction of the U.S. under President-elect Donald Trump, who has set establishing better relations with Russian President Vladimir Putin as a top priority.

Moscow has sharply denounced the deployment of U.S. forces into Poland and the Baltics, calling the measures an unneeded provocation. Russia says it has no designs on NATO territory. Meanwhile, Trump has sent mixed signals about the future U.S. role in NATO, raising questions about the longevity of the expanded U.S. military mission in Europe.

Yet for the infantrymen now deployed to Europe, the political tumult is background noise to a mission rooted in fundamentals. And for young enlisted troops taking on missions along NATO’s eastern edge there is a sense of adventure.

“Hopefully we can get right into training, get some range time in and have some fun,” said Spc. Kyle Smith, an infantryman with the 1st Battalion, 8th Infantry Regiment, who will be based mainly out of Romania after the initial setup in Poland later this week.

With a Romanian wife, he is hoping to get a chance to meet the extended family if there is any time off post.

“That is the hard part, leaving my wife,” Smith said. “I can talk to her when I can and tell her I love her. It is definitely a good experience and a story I will tell to my kids.”

Whelan, who is leading one of the convoys from Germany into Poland, is now on his fourth deployment, which included two previous missions in Afghanistan.

“This is the first deployment with a child, which is difficult,” said Whelan, who has a 5-month-old daughter.

Still he is looking forward to working with allies in the east and getting a chance to operate in Europe.

While the bulk of the brigade’s soldiers were flown directly into Poland from Colorado, a smaller contingent is ensuring the gear, unloaded at Germany’s port in Bremerhaven Sunday, gets where it needs to go.

“I don’t know if it was sheer dumb luck or it was planned that way, but the day we got to Bremerhaven on the (Dec. 8), our boat was there. Our vehicles were being offloaded,” he said. “With a tight, compressed timeline, we were able to execute.”

It hasn’t been without difficulties. The trip across the Atlantic Ocean, with the salty air and water, eats at the wiring of military vehicles that, in many cases, have seen better days.

In the weeks ahead, the 3rd Brigade will be fanning out across the Baltics, Poland, Romania and Bulgaria as well as a small presence in Germany.

“It is a another great opportunity to come and work with our allies at a critical time, with a lot of things going on with neighboring countries,” 1st Lt. Jared Ballejos said..