Fewer DUI citations for troops and civilians around Europe 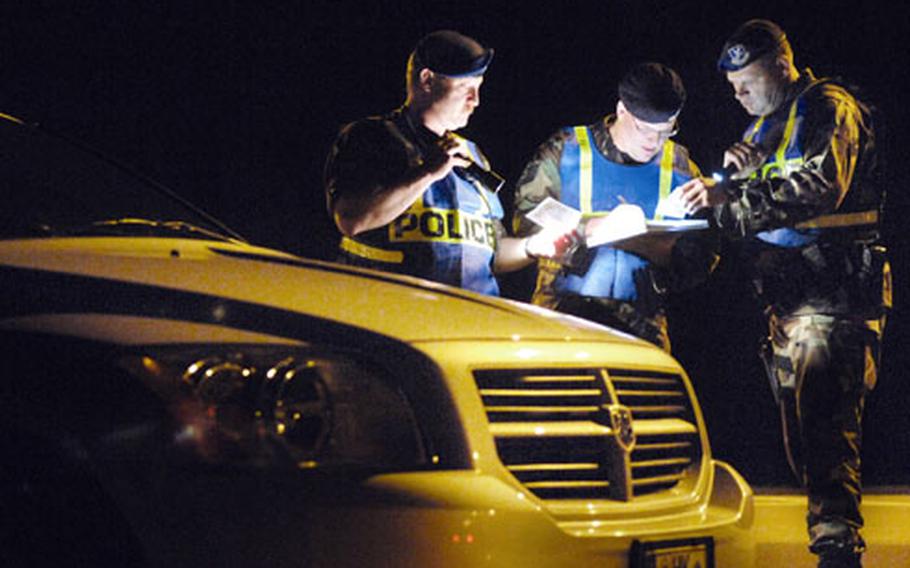 Werner Pfirrmann, Tech. Sgt. Zeb Handeland and Matthias Keiser, all from the 435th Security Forces Squadron, check IDs at a DUI checkpoint just outside Ramstein Air Base’s west gate in 2007. The number of DUIs at military communities in Europe has dropped dramatically in recent years. (Ben Bloker/Stars and Stripes)

Werner Pfirrmann, Tech. Sgt. Zeb Handeland and Matthias Keiser, all from the 435th Security Forces Squadron, check IDs at a DUI checkpoint just outside Ramstein Air Base’s west gate in 2007. The number of DUIs at military communities in Europe has dropped dramatically in recent years. (Ben Bloker/Stars and Stripes) 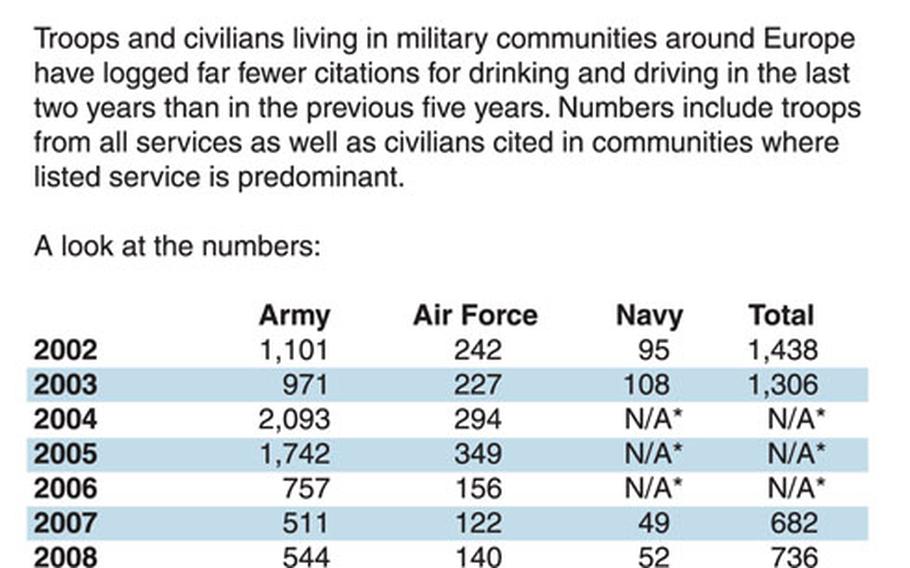 The number of Americans arrested in Europe for drinking and driving has dropped dramatically in the past five years, according to statistics provided by the U.S. military.

But officials can&#8217;t pinpoint the cause of the decline, nor can they specify exact punishments because each command handles discipline differently.

Some officials credit the commands for getting out the proper message.

"We in USAFE Safety are ecstatic about the DUI down trend," Col. William G. Routt, director of safety for U.S. Air Forces in Europe, wrote in an e-mail. "We believe that not only the commanders&#8217; involvement and our programs are working but that individuals are taking accountability into their own hands."

He finished with a message very familiar to AFN viewers: "Your life, your choice. Choose wisely."

However, the decrease in numbers could also be a reflection of the lack of enforcement, according to one U.S. Navy official in Italy who asked to remain anonymous for fear of reprisal.

In March 2007, for example, Navy leaders put an end to the use of the AlcoBlow &#8212; a flashlight-shaped device used to test sobriety &#8212; at the bases&#8217; front gate, citing a lack of standard procedures on how to use them, and what to do with people who registered levels above the legal limit, the official said.

During the five months between October 2006 and March 2007, the base recorded 23 DUIs, according to statistics provided to Stars and Stripes by the Navy. The number dropped to eight over the one-year period of April 2007 to April 2008. All but one of the eight cases occurred off base, either as the result of an accident, or at random sobriety checkpoints manned by Italian law enforcement.

While not addressing the AlcoBlow issue, Jay Meadows, a spokesman for Navy Region Europe, said the decrease can be attributed to a number of factors, including commander&#8217;s getting their point across to sailors about the dangers of drinking and driving.

This January, after getting new equipment and standardizing the process, Navy officials resumed checking for drunken drivers entering and leaving the bases. DUI numbers for this year are not yet available.

Military officials don&#8217;t want to appear too gleeful about the news of overall declining numbers. After all, the total for 2008 indicated that on average, two DUI citations are issued a day to troops or civilians living in U.S. military communities in Europe.

At the U.S. Navy base in Sigonella, Sicily, for example, the skipper has no qualms about handing down a sentence that could ruin a sailor&#8217;s careers.

"When a person drinks and drives, they make a choice. I will then make a choice that that individual will not be happy with," said Capt. Thomas Quinn, the base commanding officer.

"I examine each and every case individually based on the facts and merits of the case presented before me. If an individual is found guilty of a DUI offense, I will pass judgment and impose penalties that ultimately will ruin the career of any sailor. There is no excuse for drinking and driving, and I do not tolerate it."

From a reduction in rank to denial of a security clearance, "these effects put together will ruin a previously successful career because they severely restrict the options available to the servicemember, making it difficult or impossible to continue serving in the Navy," Quinn said.

Other commands, and commanders, aren&#8217;t as brutal, it seems.

USAREUR officials did say that Army punishments include the suspension or revocation of a driving license, a written reprimand and potential administrative action: reduction in rank, barring re-enlistment or administrative separation. Those cited for drinking and driving almost always have their licenses pulled by the authorities issuing the citation. The differences between a suspension and revocation include the level of intoxication, circumstances surrounding the arrest and host-nation laws.

Navy Region Europe declined to provide detailed numbers, but said cases brought before base commanders range from a dismissal of the incident to reduction in rank by a pay grade and/or the loss of half a month&#8217;s pay for two months, spokesman Meadows said.

The stiffest punishment for an enlisted airman was a loss of three ranks. The harshest sentence for an officer was the loss of almost $7,000 in pay over two months.

BAC limits differ around EuropeMotorists in Europe are allowed to have varying levels of Blood Alcohol Concentration and still be able to drive legally. The U.S. threshold is 0.8 per milliliter (commonly seen as 0.08 per 100 milliliters). A look at BAC thresholds in many European countries (all numbers in per milliliter of blood):

In addition, several countries have lower tolerances for drivers under 21 (such as zero alcohol) or those with only a few years of driving experience. Some countries also have different standards for those driving trucks or public vehicles.