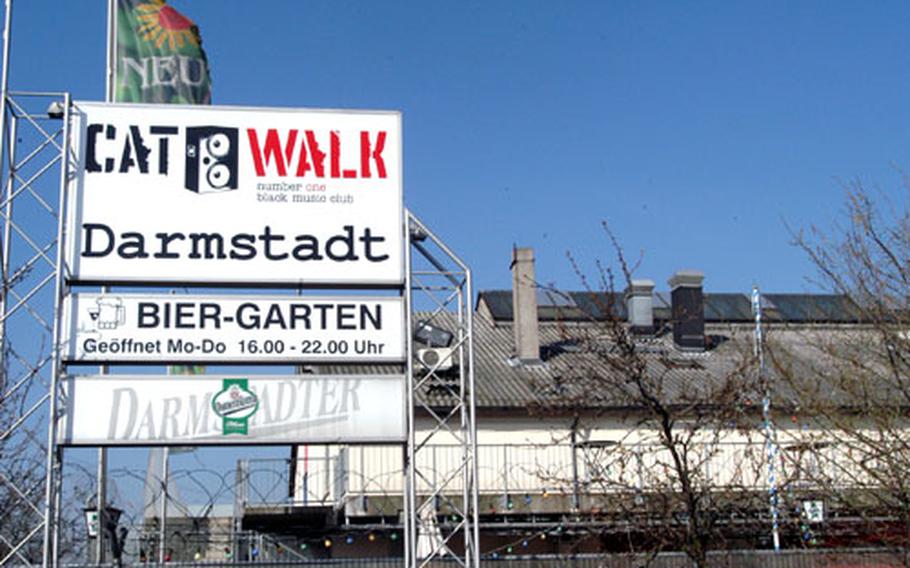 The Catwalk in Darmstadt, formerly the Natrix, has been removed from a list of off-limits businesses by U.S. Army Garrison Darmstadt. (Matt Millham / S&S)

The club, formerly known as Natrix but now called Catwalk, was once a favorite hangout for U.S. troops stationed in and around Darmstadt. But its parking lot was notorious for the number of fights that broke out there.

Now, after almost a half-dozen meetings between Ritscher and U.S. military officials, a change in club management and new security measures, the club is open again to U.S. servicemembers, civilian employees and families.

A new off-limits list that came out Feb. 21 is the shortest in at least four years, with the Catwalk and two other businesses removed from the document. The list bans one additional business from dealing with U.S. personnel.

That is, with the exception of the one business that was added to the list. American Amicable Group and its subsidiaries have been off-limits to U.S. personnel worldwide since Nov. 6, 2006. The order for banning it expires July 28, 2011, under an order handed down from Michael Dominguez, principal deputy undersecretary of Defense for personnel and readiness at the Defense Department.

American Amicable Group, a life insurance company, was made off-limits after using misleading tactics to sell Horizon Life insurance policies, which the company sold as investments, to troops. These investments, company salespeople said, could earn $1 million in 20 years if troops made regular payments to the accounts.

&#8220;In reality, the majority of military personnel who purchased Horizon Life earned little or nothing from their investment,&#8221; according to court documents filed by the Securities and Exchange Commission.

Placing people, businesses and areas off-limits is a tool commanders can use to maintain the discipline, health, morals, safety and welfare of servicemembers, according to the Army regulation that governs the action. It is also intended to prevent servicemembers from being exposed to or victimized by crime-conducive conditions, according to the regulation, Joint Army Regulation 190-24.

The regulation also says that personnel and family members who violate off-limit orders could find themselves subject to disciplinary action under the Uniform Code of Military Justice.

He took the necessary steps to get back in the Darmstadt garrison&#8217;s good graces by hiring additional bouncers, installing security cameras to cover nearly every inch of the club and taking direct control of managing Catwalk.

&#8220;The Catwalk management has been aggressive in making changes for all their customers, German and military,&#8221; Maj. Lonny MacDonald, director of Emergency Services for U.S. Army Garrison Darmstadt, wrote in an e-mail response to Stars and Stripes. &#8220;In the past, USAG Darmstadt was concerned about the safety of patrons when they attended the Catwalk. However, the management recognized those issues and made changes to ensure that their customers had a safe environment.&#8221;

A few Americans have ventured back to the Catwalk since it was taken off the list in February, Ritscher said, but he&#8217;s had a hard time convincing some Americans he meets on the street that the club is again open to them.

&#8220;When we show them this letter, then they say OK,&#8221; he said, holding up the letter signed by Lt. Col. David W. Astin, Darmstadt&#8217;s garrison commander, that officially removed the club from the list.

&#182; Brian Sachs (only involving the sale of cars and automotive parts), Steinwenderstrasse 15a, Ramstein;