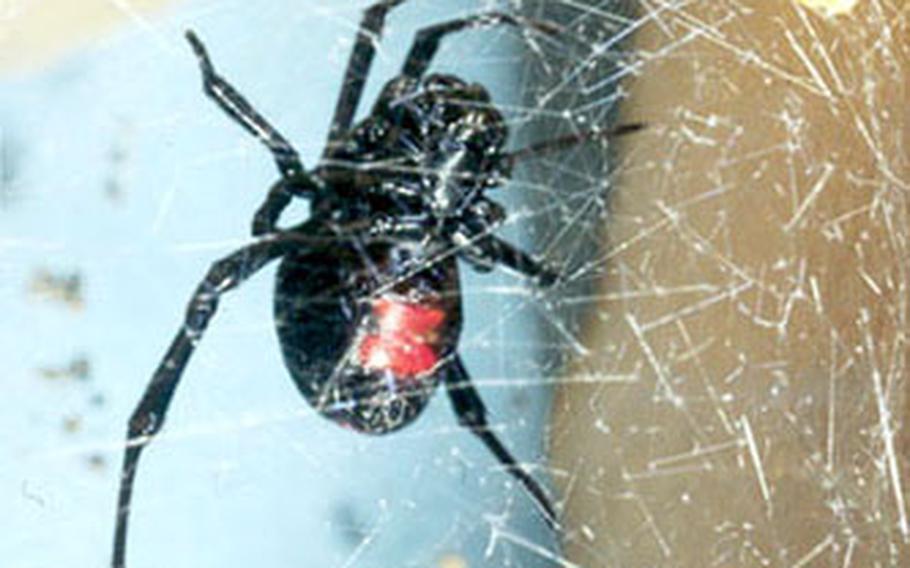 Since last year, officials at Marine Corps Air Station Iwakuni, Japan, have reported an 82 percent decline in the number of Southwestern black widow spiders found at the base. (Ohio State University)

From April through July 2004, 760 spiders were found, compared with 140 during the same period this year, said Maj. Stewart Upton, air station spokesman.

&#8220;The numbers so far are promising and indicate progress in eradication, but we also think the weather conditions played a part in keeping the numbers down,&#8221; he said. &#8220;This coming month, with higher heat and humidity, will tell us more. They become more noticeable this time of year.&#8221;

The primary concern of Japanese officials is that black widow spiders, some of which are venomous, don&#8217;t spread off base. So far, they have not, Upton said.

Of five spiders found close to base boundaries in recent months, none were closer than 112 feet, he reported at the meeting.

&#8220;We do not know how any of these spiders first arrived aboard the air station,&#8221; Upton said. &#8220;No matter how they arrived, we are firmly focused on locating and eradicating all of these spiders found on base.&#8221;

No one from the Marine base has been bitten, he said.

Less than 1 percent of all black widow bites are fatal, with small children and the elderly the most vulnerable to serious reactions, medical officials have said. Most adults bitten recover in two to five days.

Pest-control personnel have eradicated 15,039 black widow spiders on base from 2001 through July 2005, according to base statistics.

Last year, the Hiroshima Defense Facilities Administration Bureau announced plans to build a 3,062-yard, $862,790 barrier along the base boundary in order to prevent the spiders from spreading. The barrier is not yet complete, Upton said.