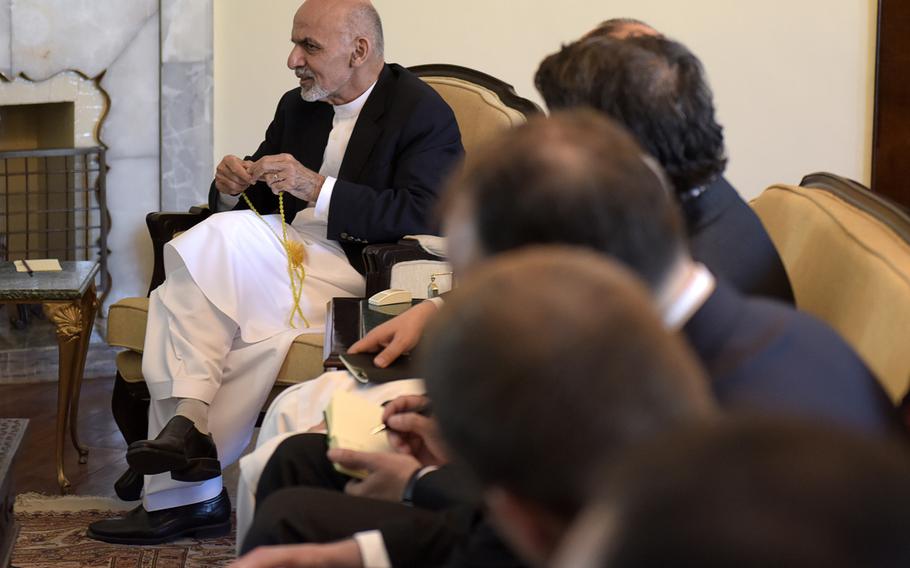 Ashraf Ghani, president of Afghanistan, during a meeting held Oct. 3, 2014 at the Presidential Palace in Kabul. (Richard D. Sherba/U.S. Army)

KABUL, Afghanistan — President Ashraf Ghani’s fledging unity government faced another public setback this week, when lawmakers rejected most of of his ministerial nominees.

Of the 25 candidates jointly selected by Ghani and Chief Executive Officer Abdullah Abdullah, only eight were confirmed by the Wolesi Jirga, the lower house of parliament.

In a surprise vote, Afghan parliamentarians even rejected the nomination of the army’s popular chief of staff, Gen. Sher Mohammad Karimi, to lead the country’s Defense Ministry. Karimi had been acting minister of defense since former President Hamid Karzai left office in September.

It was a further steback for Ghani’s administration, which took months to name Cabinet nominees among reported infighting between the Ghani and Abdullah camps.

The two were rivals in the bitter presidential election, with both sides trading accusations of electoral fraud and corruption.

But lawmakers did back Ghani and Abdullah’s picks for some high-profile ministries during this week’s confirmation hearings, including the former head of Afghanistan’s High Peace Council, Salahuddin Rabbani, as foreign minister, and Noor-ur-Haq Ulomi, who will take over the Interior Ministry.

Lawmakers also threw their support behind Rahmatullah Nabeel, who is slated to head Afghanistan’s intelligence agency, the National Directorate of Security.

Among the nominees who failed to secure parliamentarian backing was Qamarudin Shinwari for head of the ministry of tribal and border affairs. His brother, Jalaludin Shinwari, served as the deputy minister of justice under the Taliban.

Several other nominees were rejected over concerns about their policy views, or their educational and some were rejected earlier over their citizenship qualifications.

One nominee, Mohammad Yaqub Haidari, was pulled from the candidate list after his name appeared on Interpol’s wanted list for alleged tax evasion in Estonia. Haidari, who was nominated to take over the Ministry of Agriculture.