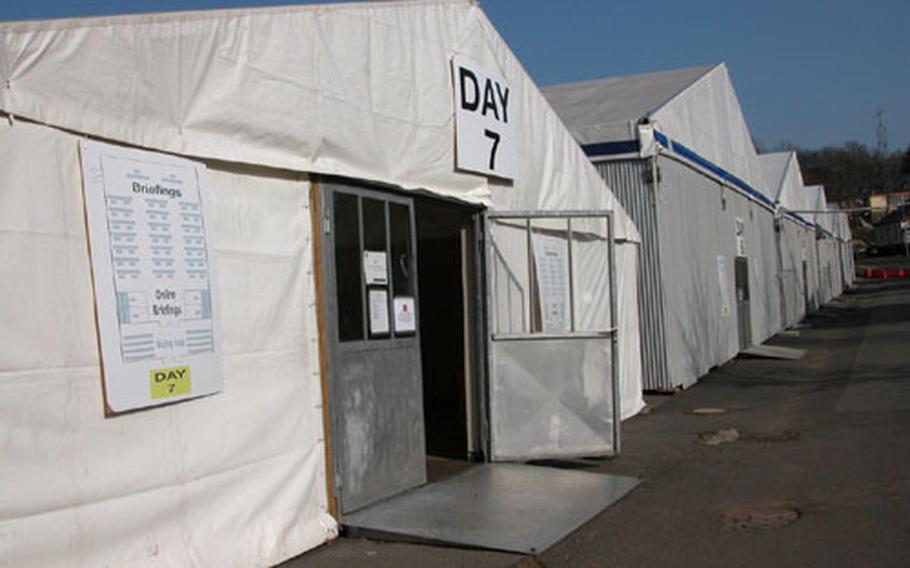 Tents were set up several weeks ago in Baumholder, Germany, for the seven-day reintegration program that soldiers from the 1st Armored Division must go through upon their return from Iraq. The soldiers won&#39;t be reintegrating for a while; the Pentagon has extended their yearlong stay by four months. (Charlie Coon / S&S)

Tents were set up several weeks ago in Baumholder, Germany, for the seven-day reintegration program that soldiers from the 1st Armored Division must go through upon their return from Iraq. The soldiers won&#39;t be reintegrating for a while; the Pentagon has extended their yearlong stay by four months. (Charlie Coon / S&S) 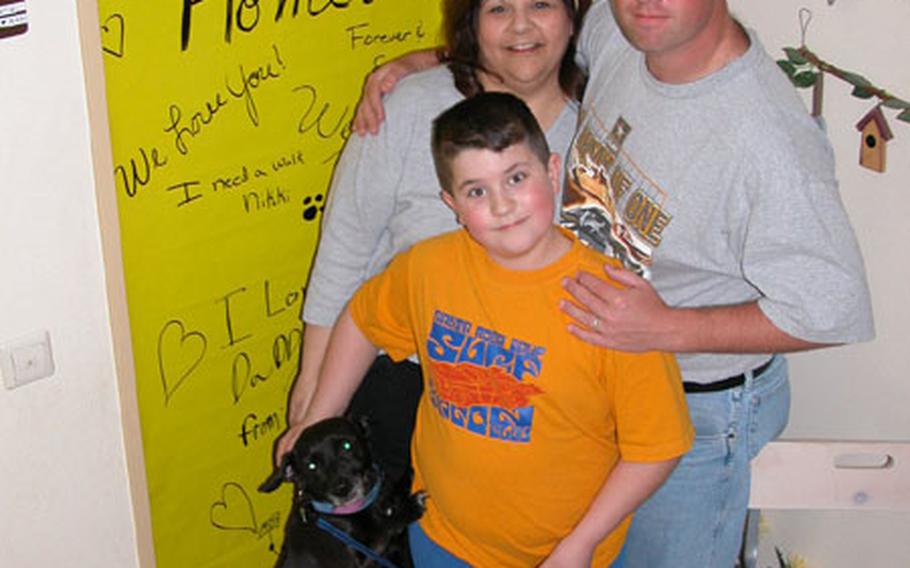 Cpl. Robert Harter of the 47th Forward Support Battalion in Baumholder, Germany, had been back from Iraq for just six days when he was told he&#39;d be going back for four months. But Harter said he was thankful to have at least a few days&#39; reunion with his wife, Betty, 9-year-old son, John, and family dog, Nicky. (Charlie Coon / S&S)

BAUMHOLDER, Germany &#8212; The meetings were called April 8 on short notice.

Spouses of soldiers from units in the 1st Armored Division already suspected what was up. They were going to be told that their husbands, and in some cases wives, were going to be kept in Iraq for up to four more months, even though their supposedly one-year tours were finished.

Others weren&#8217;t feeling so charitable. Spouses at the meetings peppered rear-detachment commanders with questions. But according to two wives who attended separate meetings, they came away with few answers.

Spouses in both Baumholder and Wiesbaden, home to 1st AD units, said they were told by rear-detachment commanders not to talk to the press. The wives said they feared that allowing their names to be used would cause them to lose their jobs on base or cause repercussions for their husbands downrange.

&#8220;It was kind of a big disappointment because we had already been disappointed before,&#8221; said one wife, referring to the deployment extension. Her husband who, along with other soldiers from his unit, was pulled off a rest and recuperation flight in January.

The wife, a 1st Armored Division spouse in Wiesbaden who did not want to be identified because she was afraid of possible repercussions to her husband, said the extension has been difficult for her children, ages 2 and 10.

In Baumholder, spouses wondered about families that were scheduled to change duty stations and soldiers scheduled to leave the Army. How about all the money spent on plane tickets on trips planned for block leave? Will there be refunds? Will the rest and recuperation program be reinstated for those who didn&#8217;t get the two-week leave?

And what about the soldiers downrange who&#8217;d been counting down the days, some of them already in Kuwait ready to board a plane for the trip home? Were they receiving any morale-boosting to deal with their despair, the wives wanted to know.

Robert Purtiman, a spokesman for U.S. Army Europe in Heidelberg, said he sympathized with the spouses and their questions but said he would not provide further information to the press until an official announcement was made confirming the extended tours.

The Baumholder community has been depleted for one year since soldiers from the 1st AD were deployed last spring to Operation Iraqi Freedom. It had busily prepared for its soldiers&#8217; homecoming. Barracks were painted and fixed up. Businesses returned their hours to normal in anticipation of more shoppers. Tents were set up to handle the seven-day integration process.

Betty Harter&#8217;s job as an FRG leader is to help distraught spouses feel better. But Harter has her own struggles.

Her husband, Cpl. Robert Harter of the 47th Forward Support Battalion, returned home to Baumholder from Iraq this month. Six days later they were told he&#8217;d have to go back. A number of newly returned troops in Baumholder are in the same boat.

Lisa Box also has more on her mind than being an FRG leader. Her husband is Staff Sgt. Robert Box of Company A, 2nd Battalion, 6th Infantry Regiment. He is among the experienced soldiers expected to remain in Iraq for four more months to help troops freshly introduced to the war.

The Harters&#8217; 9-year-old son, John, is a third-grader at Smith Elementary School, where enthusiasm for the reunion had been building. John said he is not too pleased that his daddy is being sent back to Iraq after just a few weeks home.

And the other kids at school?