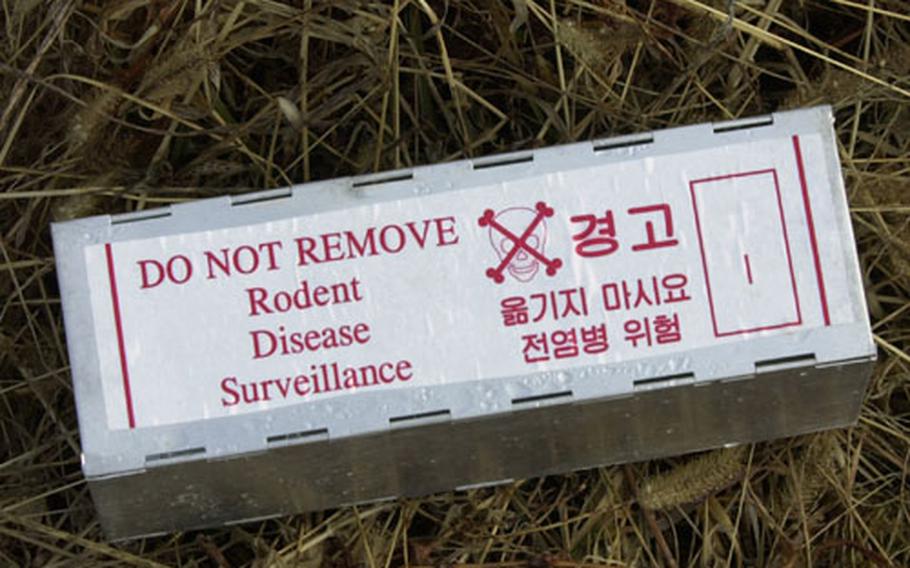 A metal rodent trap is labeled in both English and Hongul to warn rice farmers from removing the important scientific tool used to collect field mice for study. (Greg L. Davis / S&S)

A metal rodent trap is labeled in both English and Hongul to warn rice farmers from removing the important scientific tool used to collect field mice for study. (Greg L. Davis / S&S) 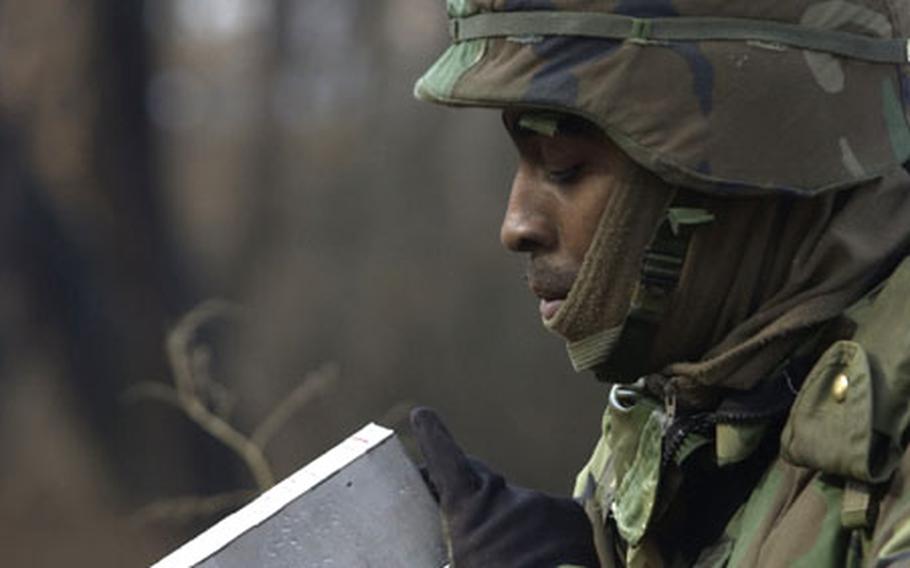 U.S. Army Corporal Wesley Ealim peers into a rodent trap that has been sprung to determine whether a field mouse is inside. Rodent traps have been placed near Camp Humphreys Tactical Training Area C to determine the extend of rodent/human interaction that typically occurs during field training. Ealim is assigned to the 5th Medical Detachment. (Greg L. Davis / S&S)

YONGSAN GARRISON, South Korea &#8212; Soldiers are being warned about a training range north of Tongduchon that poses a risk for a type of hemorrhagic fever transmitted by rodents, an Army medical official said this week.

While no U.S. soldiers have contracted the virus in the past two years, the warning went out because the area is high-risk, Klein said. Previously, the U.S. military reported from one to three cases of the virus yearly, he said.

The virus &#8212; transmitted through the air by rodent feces &#8212; can cause fever, reddened eyes, nausea, vomiting and kidney failure. The fatality rate for affected U.S. soldiers is from 1 to 10 percent, Klein said.

The striped field mouse, a small rodent native to Korea, carries the virus, Klein said. It lives in tall grassy areas bordering watery rice paddies and can transmit the virus to other mice through feces or biting, Klein said.

The risk is lower this year because of the heavier than normal rains, which have cut down on the dust through which the virus is passed to humans, Klein said.

This week, preventive medicine personnel are trapping rodents with a Sherman trap, which uses crackers and peanut butter as bait, Klein said. Preventive medicine detachments, including the 38th, the 154th and the 5th &#8212; all under the 168th Medical Battalion &#8212; are responsible for the trapping, he said.

Of the 22 mice caught June 9 and 10 at Firing Point 131 A, 36 percent had the virus, Klein said. When positive rates are more than 20 percent, the area is considered high-risk.

The trapping team will hit firing points A and B this week and the Korea Training Center and Light Training Area 130 next week, Klein said. Personnel finished trapping at Dagmar and Story ranges and should have results in about two weeks, he said.

Light Training Area 130 &#8212; a small arms range &#8212; is close to the Hantaan River, where the Korean version of hemorrhagic fever first was isolated, giving it the name the Hantaan virus, Klein said. The area is northwest of Tongduchon, he said.

During the Korean War, the virus was widespread; about 3,000 U.N. Command soldiers contracted it.

One U.S. soldier contracted the virus at Light Training Area 130 in 2001, Klein said. In 1994, eight cases among U.S. soldiers were reported with one fatality, according to the Army Medical Surveillance Activity, part of the U.S. Army Center for Health Promotion and Preventive Medicine. In 1995, three soldiers &#8212; two of whom participated in field exercises &#8212; contracted the fever.

In 2002, the Korea National Institute of Health reported 336 cases of Korean hemorrhagic fever, including one death.

So far, 82 cases have been reported this year. Most at risk are farmers and soldiers in rural areas, who are more likely to pick up and inhale dirt carrying the disease, said Chon Hae-song, a researcher with KNIH&#8217;s infectious disease department.