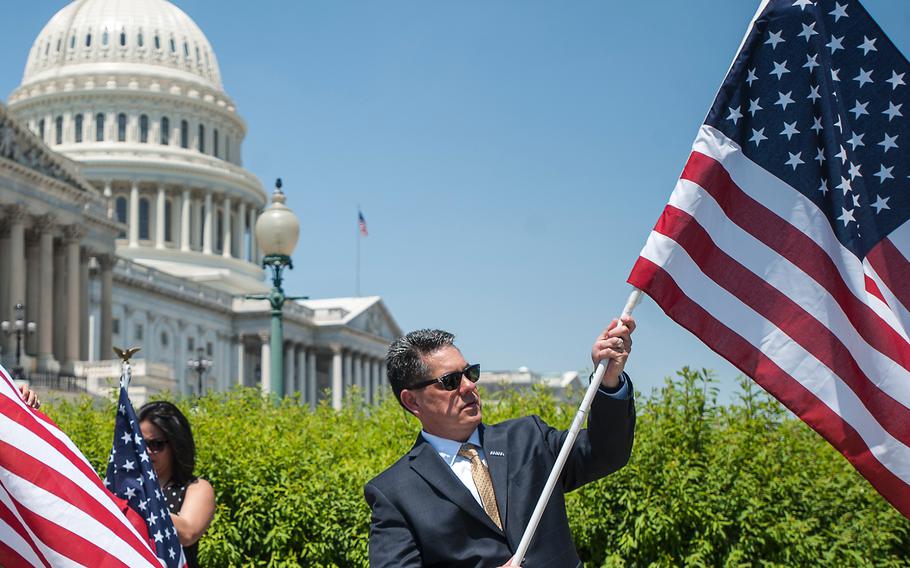 Flags are unfurled during an event at the Capitol in Washington, D.C., on Wednesday, May 17, 2017. On Thursday, 35 veterans groups came together in Washington to reach some consensus on changes to the Post-9/11 GI Bill and restart their activity on Capitol Hill. (Carlos Bongioanni/Stars and Stripes)

WASHINGTON — After their public disagreement stalled a congressional hearing last month, 35 veterans groups came together Thursday in Washington to reach some consensus on changes to the Post-9/11 GI Bill and restart their activity on Capitol Hill.

The groups agreed the Post-9/11 GI Bill needed to change, at least to close several loopholes excluding some servicemembers from receiving education benefits. What divided the groups is a proposal from Student Veterans of America, a national organization that focuses on education policy, that the GI Bill’s expansion be funded by new enlistees who would pay $2,400 over a two years to opt into the benefit.

Veterans of Foreign Wars and Iraq and Afghanistan Veterans of America vehemently and immediately opposed the idea, describing it as a “tax on troops.” The groups started competing hashtag campaigns, and the rift caused the postponement of a House Committee on Veterans’ Affairs subcommittee hearing April 26.

While the groups still differ on how to pay for improved education benefits for servicemembers, they agreed Thursday to build momentum in Congress on four changes to the GI Bill.

“This conversation – having 60-plus people in the room – made it real,” said Kristofer Goldsmith, assistant director for policy at Vietnam Veterans of America. “This isn’t some Twitter spat, it’s not a hashtag war. We’re representative of millions of veterans across the country, and we all believe the GI Bill needs to be improved.”

A measure to bring the mobilization authority up to par with active-duty entitlements was set to be discussed at the April 26 hearing.

Jared Lyon, president of Student Veterans of America, stressed the urgency of fixing the problem, as well as other restrictions in the GI Bill.

“There are lives impacted by these things not being fixed every single day,” Lyon said. “If you could see some of these fixes by the fall semester, you’re really talking about true impact in the lives of folks for whom every semester, this is a problem.”

Another change agreed on Thursday would expand eligibility for the Yellow Ribbon Program to surviving spouses and children of servicemembers killed in the line of duty. The program allows veterans to attend schools or enroll in programs that cost more than the GI Bill tuition cap.

They’re also looking to expand full GI Bill benefits to all Purple Heart recipients. Currently, a veteran must be medically retired from the military or have 36 months of active-duty service to qualify. Aleks Morosky, national legislative director for the Military Order of the Purple Heart, said there are approximately 1,500 Purple Heart recipients who aren’t eligible for full education benefits.

“We’d like to see that fixed,” Morosky said. “We think if you’ve been wounded on the battlefield, you’ve met the service requirement.”

Lastly, the groups want to address, in some way, assisting student veterans whose schools close. Last year, for-profit ITT Technical Institute closed its doors, and thousands of veterans who attended the campuses were unable to recover lost education benefits. The situation has also happened with other for-profit schools that have closed.

Will Hubbard, vice president of government affairs at Student Veterans of America, said the groups plan to send a letter to Congress early next week to push for the four changes.

“We’ve all seen tons of letter urging Congress to do various things. Why is this letter different? The people in that room are going to be pounding the pavement,” Hubbard said. “This is something we’re all going to get behind and rally around.”

Hubbard said there would likely be further discussions between the groups, including talk of ideas to pay for GI Bill changes. There are more than a dozen other ideas for improvements to the bill besides the four agreed on Thursday.

The meeting Thursday didn’t resolve divisions about whether to charge servicemembers for the GI Bill. Pat Murray, associate director at VFW, said the VFW continues to disagree with Student Veterans of America on that point. The groups did find common ground on the four changes, though, and VFW plans to sign onto the letter, Murray said.

“It’s good for the community to come out with one voice, especially with something we can all agree on, to show we’re together on this,” Murray said. “We want this pushed through.”