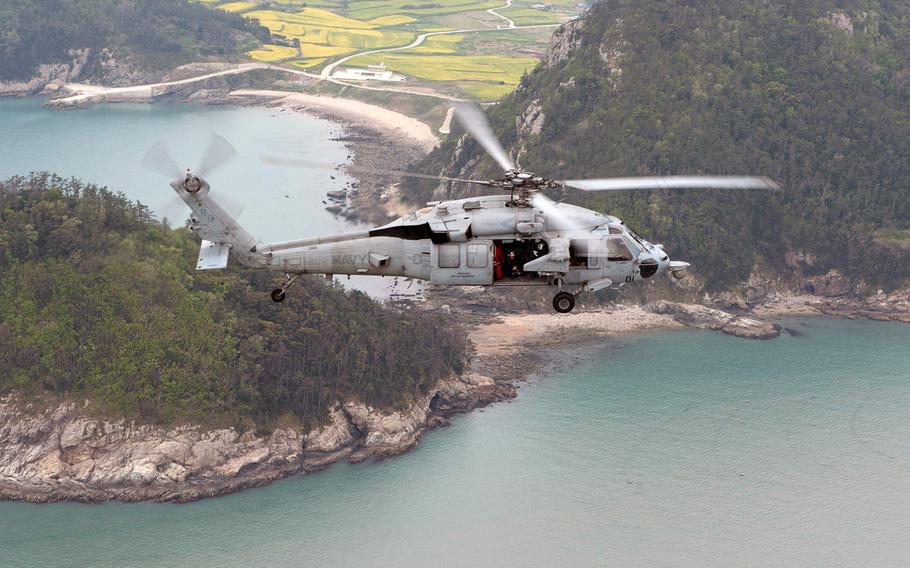 An MH-60S Sea Hawk helicopter from the amphibious assault ship USS Bonhomme Richard conducts search and rescue operations as requested by the South Korean navy near the scene of the sunken ferry Sewol in the vicinity of the island of Jindo. (Christian Senyk/U.S. Navy)

SEOUL — One of South Korea’s worst civilian disasters, a tragedy of youthful potential lost, is unfolding on live TV. North Korea, which seems to be trending up again on the belligerency scale, may be preparing to test another nuclear weapon.

“It may be one of the few times that a U.S. president comes here to Seoul and the primary news story is not about the U.S. president coming to Seoul,” Victor Cha, Korea chair for the Center for Strategic and International Studies, told reporters on the sidelines of an academic conference in Seoul on Wednesday.

With bodies being pulled around the clock from a submerged passenger ferry off the country’s southwest coast, the president’s two-day visit will no doubt be overshadowed by the April 16 sinking that is believed to have left some 300 dead, including hundreds of high school students on a field trip to a tourist island.

A week after the accident, which increasingly appears to have been caused by human error and lax adherence to safety standards, heart-wrenching images of funerals for the victims are continuously shown on television, alongside the somber procession of shrouded bodies being transported from recovery boats to tents for identification by their families.

Meanwhile, South Korea announced this week that it has detected increased activity around a main nuclear test site in North Korea — a possible indicator that Pyongyang could soon conduct its fourth nuclear test, despite ongoing sanctions and warnings from the international community.

Cha said Obama’s Asia visit, which also includes stops in Japan, Malaysia and the Philippines, is meant to demonstrate that the U.S. rebalance to the region is real but that it isn’t meant to contain China.

To that end, the president’s agenda includes cultural, business and trade-related stops that will showcase the non-military aspect of the Pacific pivot. In Seoul, Obama is scheduled to visit a centuries-old palace and meet with members of the local American Chamber of Commerce.

But in light of the ferry tragedy, Cha said, some of those activities might be cut. Obama will likely reference his own daughters in offering condolences for the tragedy, he said.

Obama and South Korean President Park Geun-hye are expected to discuss a number of critical issues, from the historical grievances that have strained the relationship between America’s key allies in the region, Seoul and Tokyo, to North Korea’s nuclear capabilities.

“The timing of this visit is very important to demonstrate a strong military alliance and send a strong diplomatic message to North Korea, for them to come back to the negotiating table,” he said, adding that a fourth nuclear test “would make a return to diplomacy very, very difficult.”

The U.S.-Korea Institute at the Johns Hopkins School of Advanced International Studies said in an analysis posted on its 38 North website that, based on satellite imagery, the level of activity at the Punggye-ri site does not indicate a test is imminent.

Some have speculated that Pyongyang, which threatened last month to conduct a nuclear test, is timing its next test to take place during Obama’s visit.

However, James Steinberg, former U.S. deputy secretary of state under Obama, said Tuesday at the conference, hosted by the Asan Institute for Policy Studies, that if the test comes while the president is in Seoul, the U.S. should not react to it more forcefully than it normally would.

“In some ways, it would be playing into (North Korea’s) hands to say that it’s worse” than if a nuclear test took place while Obama was in the U.S., he said.

The two presidents will also likely discuss the continuing tensions between Seoul and Tokyo over Japan’s militaristic past. Many in South Korea believe Japan has not fully acknowledged atrocities committed during its 35-year occupation of the Korean Peninsula, which ended in 1945, and related issues, including the use of sex slaves by Japanese soldiers.

Tokyo’s push for more military spending and reconsideration of its doctrine of self-defense only has angered many in South Korea, where some believe Japan retains imperial ambitions.

Steinberg said it is important to separate concerns about history and the legitimate security concerns that are prompting Japan to consider military expansion. And while the U.S. can help facilitate discussion between the two countries, he said it shouldn’t be seen as taking sides.

Both countries should feel confident that the U.S. stands beside them, but not rely on Washington “to try to be the one that finds the right answer.”

“I think it’s unproductive to get into questions of who’s to blame,” he said. “I think the question is, how do we move forward? Anybody who has spent time in the region, who lives in the region, understands that these issues have resonance today.”