Female troops in Iraq focus on the job, ‘not our gender’ 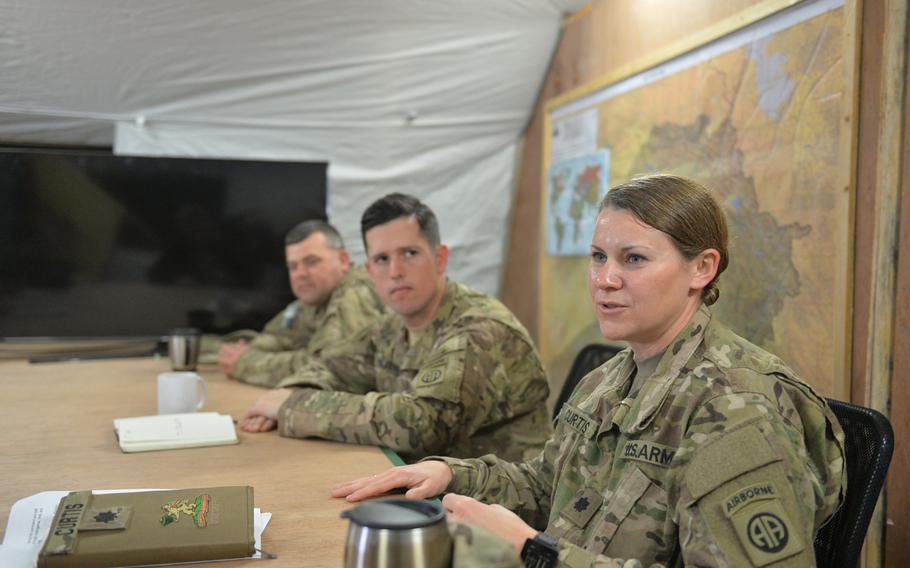 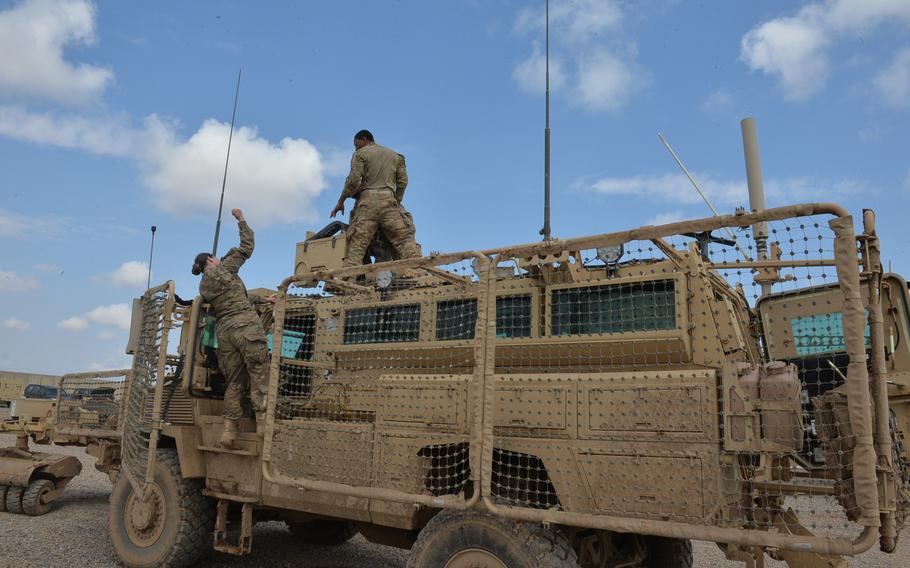 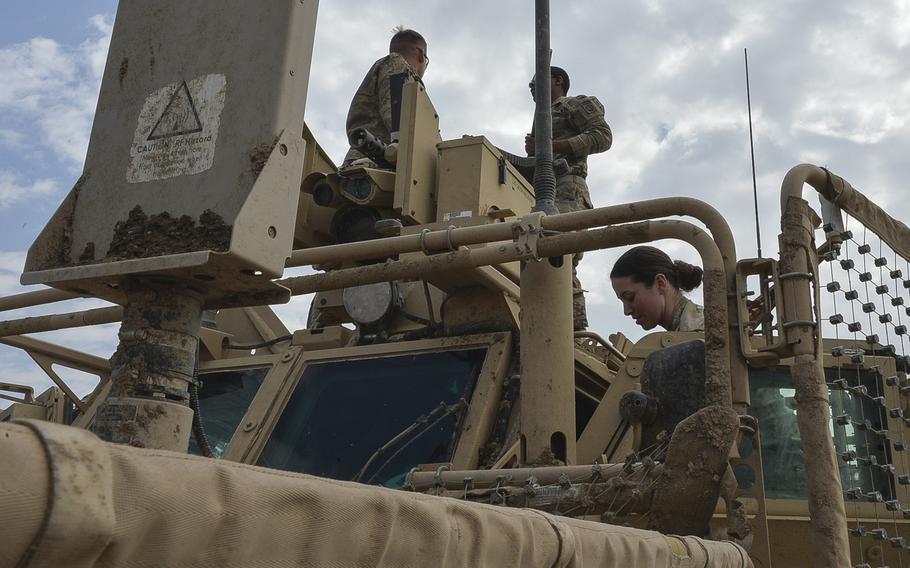 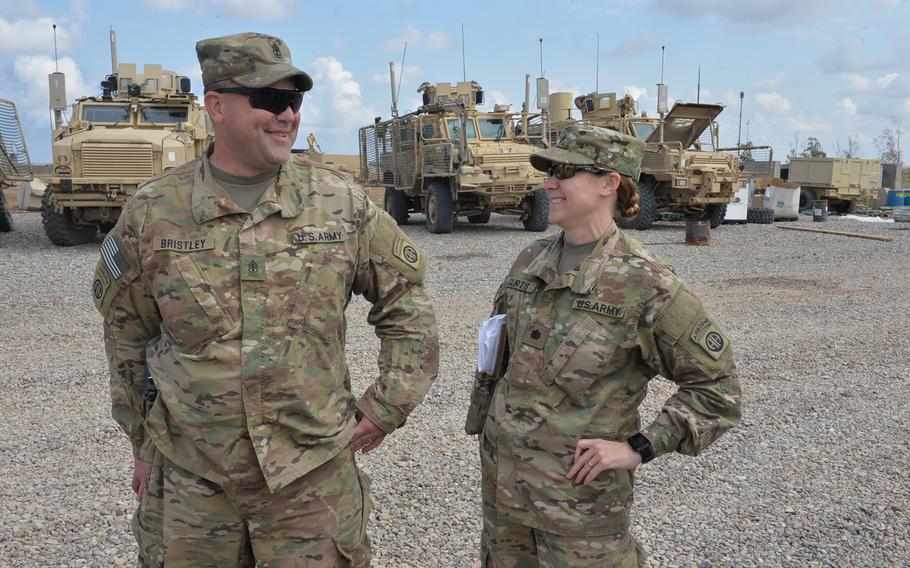 Buy Photo
Pictured here sharing a laugh on Friday, March 17, 2017 at Qayara Airfield West are 1st Sgt. Greg Bristley and Lt. Col. Elizabeth Curtis. Curtis, one of a few high-ranking female servicemembers on the base, said that while more opportunities exist now for women in the military, the focus should be on their skills, not their sex. (Chad Garland/Stars and Stripes) 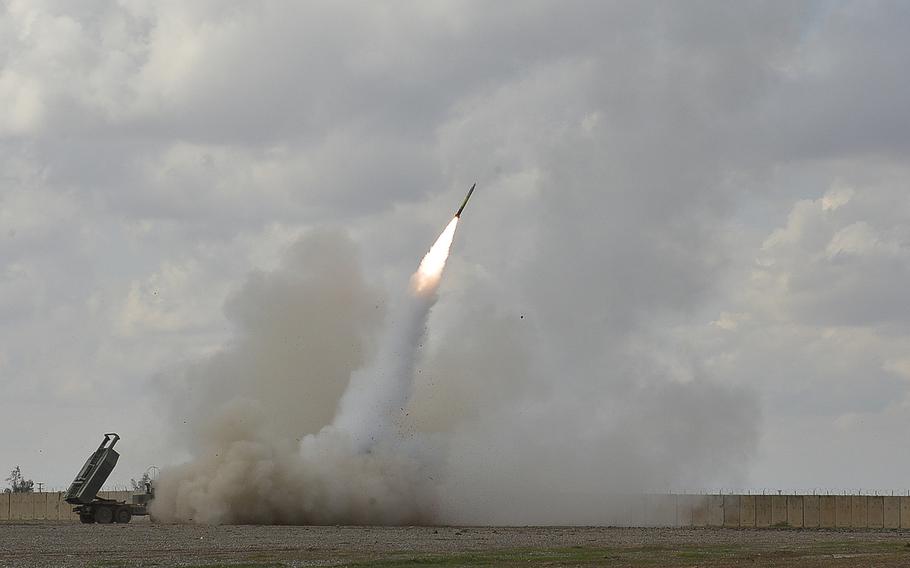 Buy Photo
A High Mobility Artillery Rocket System launches a rocket toward Islamic State targets in Mosul from Qayara Airfield West on Friday, March 17, 2017. While women in artillery fields were previously restricted to rocket units, new rules have begun allowing them to serve in cannon batteries as well. (Chad Garland/Stars and Stripes) 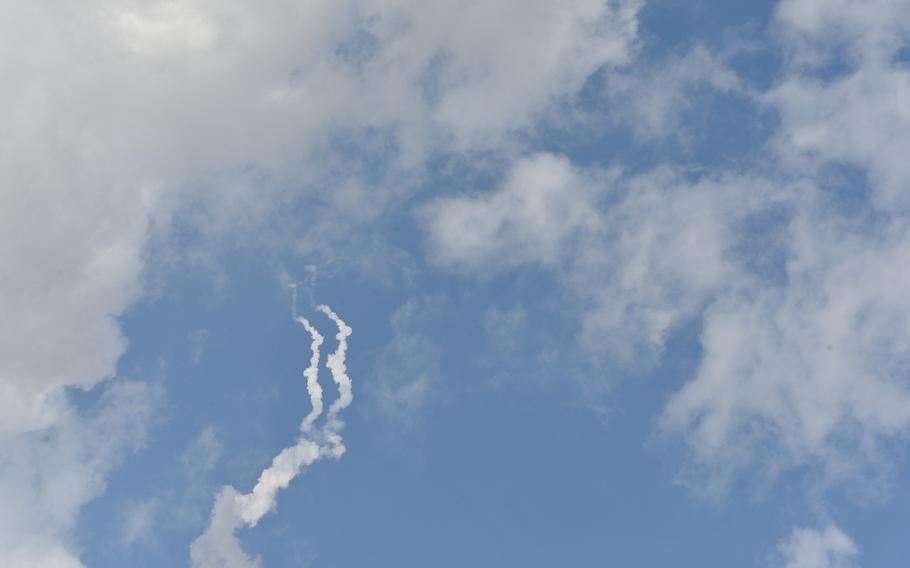 Buy Photo
Smoke trails behind two Guided Multiple Launch Rocket System unitary rockets above Qayara Airfield West on Friday, March 17, 2017. The rockets were launched at Islamic State targets near Mosul by crews of soldiers operating High Mobility Artillery Rocket Systems, including at least one female crew member in a job that was once restricted to men only. (Chad Garland/Stars and Stripes) 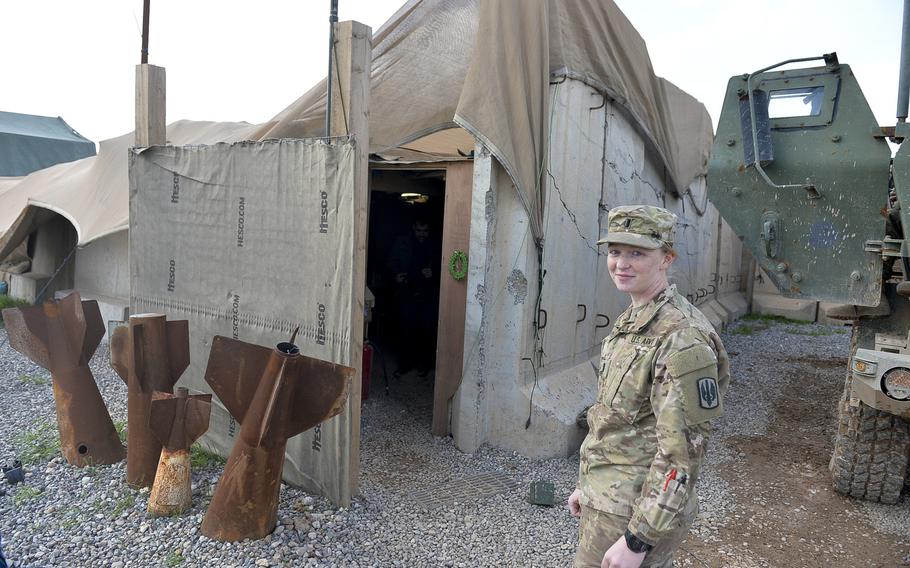 Buy Photo
Platoon commander and 1st Lt. Mary Floyd stands near a structure that serves as the living quarters for the soldiers of ''Odin'' battery at Qayara Airfield West, pictured here on Friday, March 17, 2017. Floyd, a field artillery officer, said she loves to fire rockets, but she welcomed Army rules allowing women to serve in cannon batteries now, too. (Chad Garland/Stars and Stripes)

QAYARA AIRFIELD WEST, Iraq — U.S. troops here say the fight is different now than it was more than a decade ago, the last time some of them were here.

For one thing, they’re less exposed to the kind of combat they’ve seen in the past. For another, women are proving themselves in roles once closed to them.

Over the past several years, an increasing number of fields have been opened to women, but it wasn’t until late 2015 that then-Defense Secretary Ash Carter announced a decision to open all military jobs to women. This month, Women’s History Month, marks a year since Carter approved plans from the military service branches and U.S. Special Operations Command to open all combat roles to women and authorized their integration into combat roles.

In some cases, the Mosul campaign is the first in which women have deployed in previously closed specialties.

“We’ve seen a tremendous change” for women, said Lt. Col. Elizabeth Curtis, commander of the 82nd Airborne Division’s 407th Brigade Support Battalion, which coordinates logistics support for about 1,700 U.S. troops helping the Iraqis in the battle to retake Mosul from the Islamic State. The unit also helps supply the Iraqis with ammunition and equipment.

Curtis and her senior noncommissioned officer, 1st Sgt. Greg Bristley, couldn’t agree on whether the current fight in Iraq has come “full circle” from when they both deployed here in 2003, but both say it’s much different.

“They’ve allowed us to come and advise them,” Curtis said of the Iraqis. “We want to get rid of the bad guys. We are all moving toward the same objective.”

Curtis said that while there are also now more opportunities for women, the issue shouldn’t be about a soldier’s sex, but about her skills.

“It’s not about our gender, it’s about our jobs,” she said. “The enemy does not discriminate.”

Earlier this month, a scandal involving active-duty and veteran male Marines sharing nude photographs of their female colleagues and others via social media drew attention to the challenges of integration in units where women are considered inferior or unwelcome.

Marine veteran Marshall Chiles, a spokesman for Marines United, the Facebook group at the center of the scandal, told the Daily Beast such incidents foreshadow “a big problem” with integrating women into front line units, threatening to be a “huge distraction” affecting the combat effectiveness of such elements.

In Iraq, however “women are [deployed] as forward as men,” Curtis said. Female soldiers can be seen working alongside their counterparts at tactical bases within a few miles of Mosul.

In January, the first female U.S. Army combat engineer to serve in Iraq completed a deployment. Pfc. Neesy Sanders told Stars and Stripes in December that her job, which involves building fighting positions and bridges, laying explosives and clearing routes of bombs, was essentially to “blow things up.”

In an Army profile in January, Sanders said she didn’t want a desk job and she didn’t want to cook — other jobs available to her when she enlisted. So she decided, “I’ll breach these obstacles.” Little did she know she’d be breaking down gender barriers.

“It’s a ground-breaking step in the right direction,” Capt. Tyandre Ellis, her company commander said in January. “She quickly proved mastery of her skill set and led the team as one of the few that actually drove the [mine-resistant vehicle] with rollers, supporting two distinct area clearance missions.”

Sanders said that her male counterparts made her feel welcome and protected. While she felt privileged to be the first woman on such a deployment, she felt like “one of the guys.”

“We have a job to do — survivability, countermobility and mobility — and we do it,” she said.

Roughly 6,000 female servicemembers are serving in the Central Command area of responsibility, but it’s unclear how many of them are in job fields previously restricted to men. The command doesn’t track that number, but Andy Stephens, a Central Command spokesman, said in an email in February that every servicemember is qualified to fight, “and any servicemember — regardless of gender — can be thrust into combat.”

As one of the few high-ranking women at Qayara Airfield West, Carter said, she’s often asked her opinion about the evolving roles for women in the military. She welcomed the change but stressed that it’s part of a long history of women’s service.

“We’ve been doing this a long time,” she said.

A native of Steilacoom, Wash., she was introduced to the military while growing up an Army brat, she said. Her father was a soldier, and she was drawn to the service to “see the world” and to take on responsibilities that aren’t typically available outside the military.

She first deployed to Iraq as a first lieutenant during the initial invasion of Operation Iraqi Freedom in 2003 and has deployed twice to Afghanistan. For her and her first sergeant who deployed as a motor sergeant in 2003, the wars have “almost defined our careers.”

The new rules may make the biggest difference for the younger women.

First Lt. Mary Floyd, 24, is a platoon commander in the “Odin” battery of High Mobility Artillery Rocket Systems on the base, part of the 18th Field Artillery Brigade. Her specialty has been open to women since early 2012, but some assignments within the specialty have until recently remained restricted to men.

Floyd, whose mother and father both served in the Air Force, welcomed the new opportunities, which allow her to serve as a fire support or fire direction officer in cannon batteries — once male-only jobs.

“I can do anything now,” she said. “Not just rockets.”

One of her female soldiers was on a crew conducting a fire mission that launched 10 rockets against Islamic State group targets in Mosul on Friday.