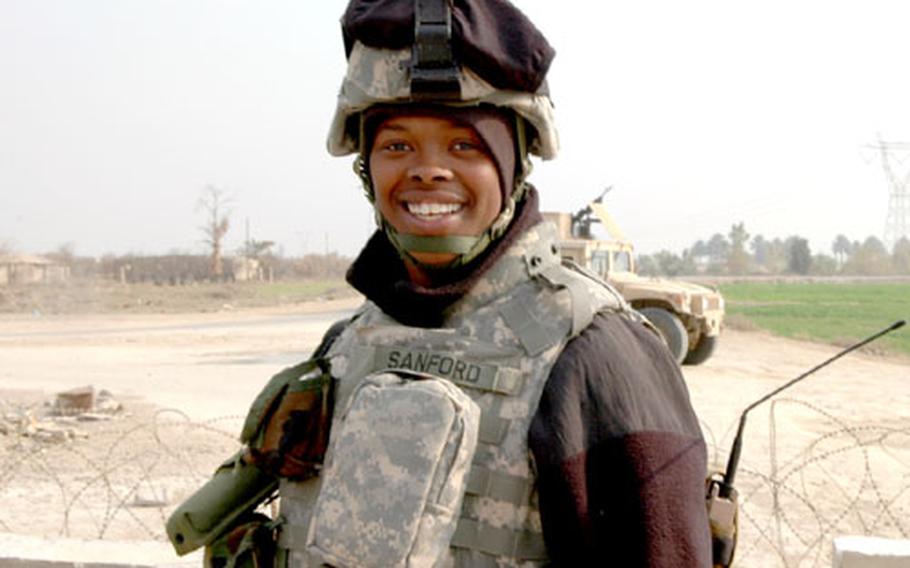 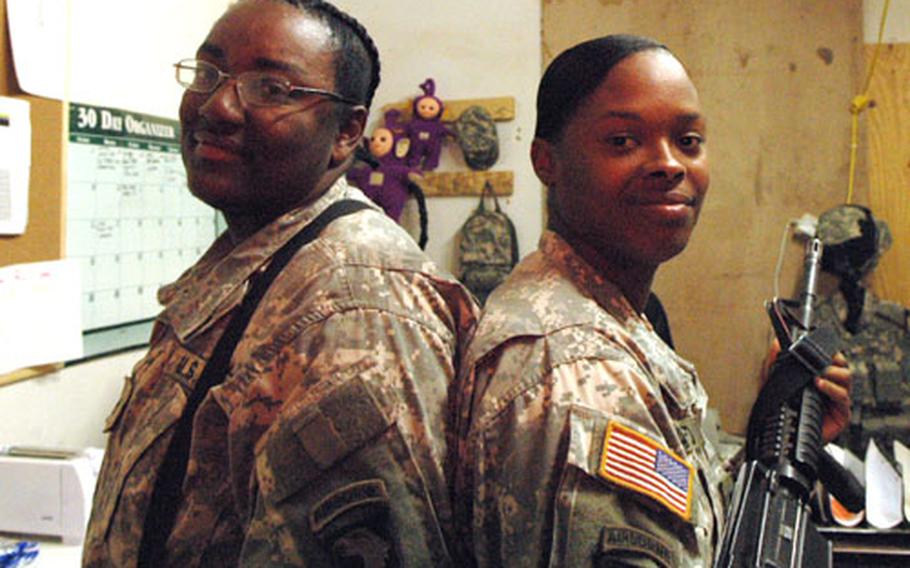 Pfc. Phillisha Darby, left, and Pfc. De&#39;Cassalyn Sanford, say they&#39;re proud of having held their own during raids they&#39;ve performed as members of Company F, 526th Brigade Support Battalion. Both soldiers have been nominated for the Combat Action Badge. (Anita Powell / S&S)

FORWARD OPERATING BASE STRIKER, Iraq &#8212; They&#8217;re not your average infantrymen.

But the women soldiers of Company F, 526th Brigade Support Battalion work shoulder-to-shoulder with their male counterparts, conducting regular raids and operations in the grisly, insurgent-heavy area south of Baghdad.

Since arriving in Iraq in October, the women, whose battalion is part of the 2nd Brigade Combat Team, 101st Airborne Division of Fort Campbell, Ky., have begun accompanying infantry soldiers on raids and missions. The intent, said company commander Capt. Alexander Garcia, is so women soldiers can perform searches on women at the scene.

But, he said, the women have seen a little more action than they bargained for &#8212; a point he mentions with pride.

Company 1st Sgt. Jimmy Dennis says the decision to send women soldiers into combat &#8212; a fairly new, and historically controversial, idea &#8212; has been embraced by women in the unit.

The Pentagon dismisses the notion that such missions contradict its stated policy of not having women in combat roles.

&#8220;All of Iraq is dangerous. But women soldiers are not utilized as front-line troops, particularly for offensive actions. We can tell the difference between sending combat troops into close combat (women soldiers did not lead assaults into Fallujah) and having troops encounter a combat situation during routine operations,&#8221; Army spokeswoman Lt. Col. Pamela L. Hart wrote in an e-mail response to questions.

Two such soldiers, Pfc. Phillisha Darby, 24, and Pfc. De&#8217;Cassalyn Sanford, 26, say they have relished their experiences.

During her mission, she said, &#8220;They treated me like one of the guys. The first sergeant out there knew me, so he knew I could hold my own, that I was a pretty tough female.&#8221;

Both soldiers have been nominated for the Combat Action Badge, given to those who personally engage with or are engaged by the enemy during a combat operation.

Sanford said that she did find, however, that her skills came in handy on the battlefield.

The two have also had precious insight into a well-hidden corner of Iraqi society: the inner lives of its women.

Both said that their presence was initially jarring &#8212; both to Iraqis and to their fellow Americans.

Sanford, between fits of laughter, relayed her accidental run-in with a soldier having a private moment during a mission.

In the future, she said, she hopes her presence on the front lines will be better received.