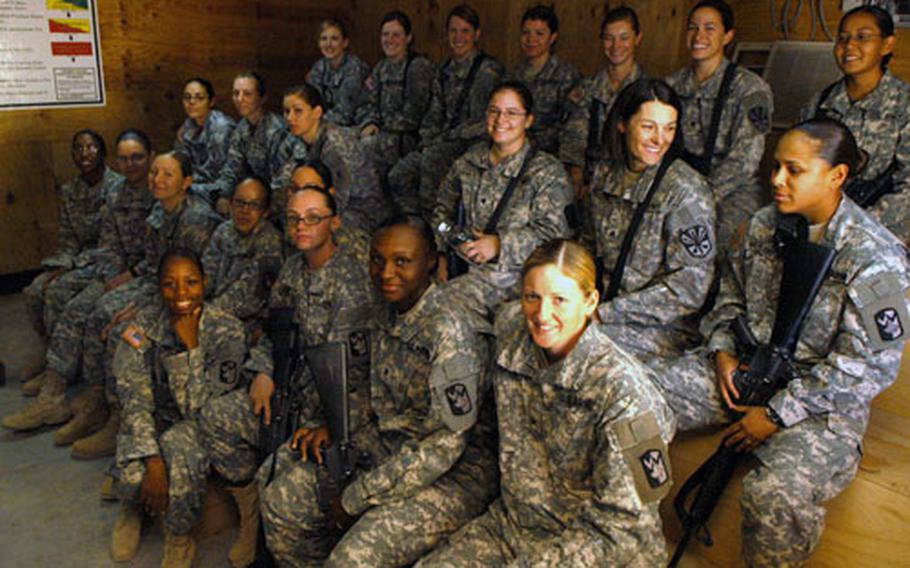 A group of female soldiers based at Logistics Support Area Anaconda near Balad, Iraq, say when it comes to accompanying convoys there are no such things as "girls jobs" in the Army. “If you do convoy security, you basically do the same job,” says Spc. Tiffany Lovett of the 418th Transportation Company from Fort Hood, Texas. (Allison Batdorff / S&S)

But convoys are one of the few places where active-duty women commonly are found outside the wire. And that&#8217;s where they like to be, according to a group of 30 women from three Army convoy security units who assembled in Balad last week.

The women headquartered at Logistics Support Area Anaconda describe their job as &#8220;driving up and down the highway.&#8221; Working as gunners, drivers and medics, they escort contractors as they take goods and fuel from the hub at Anaconda to outlying bases.

The job also includes protecting your assets, said 259th Engineering Company gunner Spc. Tanya Curtis. The 25-year-old from Window Rock, Ariz., hasn&#8217;t been in a serious firefight, but she has shot her weapon, she said.

Spc. Sara Gordoa, a medic with the 259th Engineering Company, was in a convoy in March when the lead vehicle got hit. The life-and-death situation drew everyone closer, said Gordoa, 22, of Glendale, Ariz.

Danger is part of their duty, said Spc. Nicole Reuter of the Nebraska National Guard&#8217;s 755th Chemical Company based in O&#8217;Neill, Neb.

But one thing irks them to no end: being set apart as &#8220;female&#8221; when it comes to their job. Some women declined to be interviewed for this article because they thought it would do that.

And civilians make an even bigger deal than that, said her colleague, Pvt. Jessica De La Cruz, 21, of San Antonio.