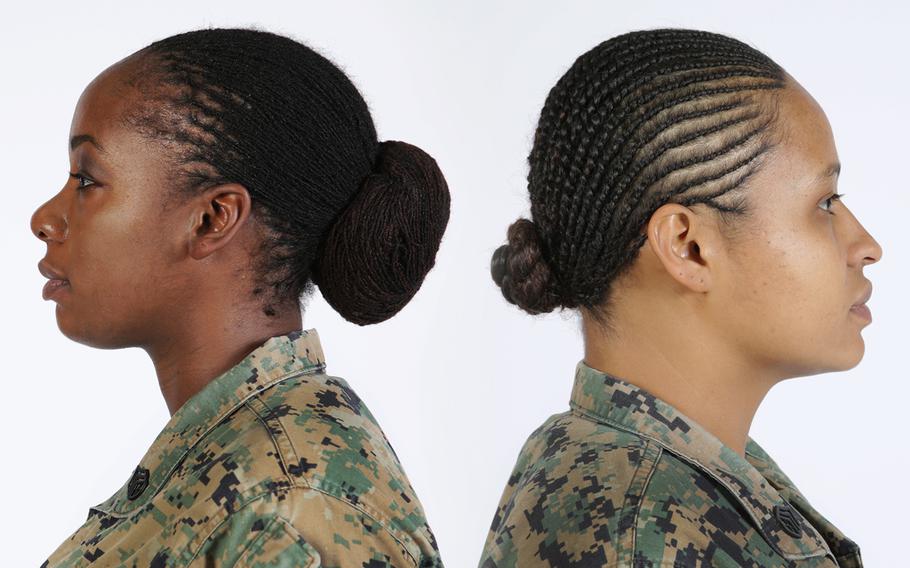 Female Marines will be the first members of the U.S. military permitted to wear locks in their hair while in uniform, the service announced Monday.

The modifications — which also permit twists — come more than a year after the Marines began reviewing their uniform policy to address allegations of racially insensitive hairstyle regulations across all branches of the military.

Commandant Gen. Robert B. Neller approved the new female hairstyle recommendations that were made by a Marine Corps uniform board, the Marines said in a statement.

Marine Corps officials say the changes give female Marines more ways to wear their hair while still maintaining a professional and neat appearance. Locks and twists, in particular, may be easier for some female Marines to maintain while deployed and are less costly and time-consuming to maintain than other approved styles, officials said.

The updated policy includes how locks, twists and braids must be worn, down to their size and spacing. Locks require partings to be square or rectangular in shape. Locks, multiple braids and multiple twists must encompass the whole head — with the exception of bangs — and mixing styles is not allowed. Faddish and exaggerated styles, such as designs cut in the hair or spikes, and conspicuous hair accessories are still banned.

A website with illustrations showing authorized and unauthorized male and female hairstyles is expected to be completed within the next month, the Marines said. In the meantime, the service has posted an instructional video showing how to wear the newly approved hairstyles.

The changes to the Marines’ uniform policy were driven by a Pentagon-wide review of servicemembers’ permitted hairstyles, directed by former Defense Secretary Chuck Hagel in 2014. The review followed a backlash from some soldiers and members of Congress who said that the new grooming rules released in April 2014 were racist and unfairly targeted black women.

All of the services at the time banned dreadlocks and two-strand twists — hairstyles worn more commonly by black women.

After the review, the Army, Navy and Air Force made immediate changes, relaxing their rules to allow female servicemembers to wear two-strand twists. The Army increased the size of authorized cornrows, the Navy permitted larger buns and the Air Force allowed French twists and Dutch braids. The Army and Air Force also removed the words “matted” and “unkempt” from their grooming policies but still maintained the ban on locks. The Air Force changed the term dreadlocks to “locs.” The service’s current female grooming and personal appearance standards say locs, a shaved head, flat-tops and military high-and-tight cuts are not authorized hairstyles. The Navy does not allow locks, either, calling them fused or coiled strands of hair that cannot easily be combed out.

The Marine Corps undertook a longer review and sought feedback on hairstyles from female and male Marines through a survey released by the uniform board. During the review, Staff Sgt. Cherle Wright proposed the addition of locks and twists, according to the Marines.

Wright, a supply chief with II Marine Expeditionary Force, submitted a recommendation letter with the proposed changes to her command. “While briefing Marines, my focus was about awareness and professionalism,” she said in the Marine Corps statement. “Once the information and facts were presented, the perceptions of many Marines changed.”