Female Marines aim to blend in, but be visible enough to set an example Buy Photo
Lt. Col. Julie Nethercot, standing, speaks with Maj. Jennifer Marino before a panel discussion on the role of female Marines in Iraq and Afghanistan on Thursday at the Museum of the Marine Corps at Quantico, Va. (Jennifer Hlad/Stars and Stripes)

Buy Photo
Lt. Col. Julie Nethercot, standing, speaks with Maj. Jennifer Marino before a panel discussion on the role of female Marines in Iraq and Afghanistan on Thursday at the Museum of the Marine Corps at Quantico, Va. (Jennifer Hlad/Stars and Stripes) 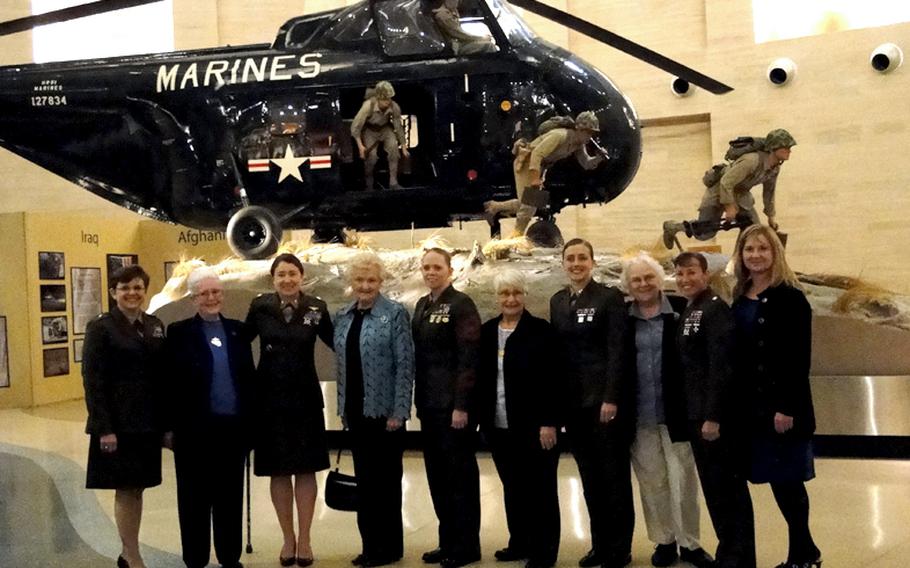 Buy Photo
The panelists for Thursday’s discussion on the role of female Marines in Iraq and Afghanistan pose with some of the docents of the Museum of the Marine Corps at Quantico, Va. (Jennifer Hlad/Stars and Stripes)

But some who have been &ldquo;the first&rdquo; &mdash; to fly with an all-woman Marine One crew, to serve with a female engagement team in Afghanistan &mdash; said they&rsquo;ve realized the importance of setting a positive example and showing other young women the opportunities available to them in the military.

&ldquo;We don&rsquo;t like to be singled out. We&rsquo;re Marines,&rdquo; Maj. Jennifer Marino said during a panel discussion Thursday about the role of female Marines in Iraq and Afghanistan.

Marino was the co-pilot for the first and only all-female Marine One flight crew, but she said it was the men who had pushed them to put that crew together. After news reports about the crew were published, Marino said they started getting letters from parents saying their daughters had been inspired to join the Marine Corps or become helicopter pilots.

Those letters showed the women the importance of serving as role models and talking about their experiences, she said.

Capt. Victoria Sherwood, a communications officer who served with the first Marine female engagement team in Afghanistan, said she had a similar experience.

&ldquo;When I joined the Marine Corps, I wasn&rsquo;t going to be a &lsquo;female Marine,&rsquo;&rdquo; she said.

Now, she said, too few young women realize the career opportunities available to them in the military, and talking about her experiences and the experiences of other female Marines is the best way to recruit other strong women.

The opportunities for women are changing. Though women are still barred from infantry units, a recent Pentagon decision will open to women more than 14,000 active-duty and reserve jobs that were previously available only to men.

As early as this summer, a few hundred jobs for company grade officers and staff noncommissioned officers in the Marines will be open to women. Those positions would be in ground combat units like artillery, tanks and combat engineer battalions in military specialties already open to female Marines.

The senior women on the panel said they have seen major changes during their time in the service. For Lt. Col. Julie Nethercot, what stands out is the questions she isn&rsquo;t asked.

Her second assignment was to lead an all-male unit, and she remembers quite a few questions about &ldquo;how it feels&rdquo; to be a woman leading a male team.

&ldquo;I never saw them as anything other than Marines,&rdquo; Nethercot said.

And while the women talked about gains the female engagement teams had with Afghan women, Master Sgt. Julia Watson stressed that women can also engage with Afghan men.

&ldquo;We were often able to get different and better information [than men got],&rdquo; Watson said, because they could engage both genders. Afghans tended to think of them as kind of a third gender &mdash; not the same as Afghan women, but not men, either.

&ldquo;It&rsquo;s not about males and females, it&rsquo;s about gender roles,&rdquo; said Watson, who also developed and implemented the Iraqi Women&rsquo;s Engagement Program.

Sherwood said the Marines on her female engagement team excelled at reading people and getting to know the community. And while it was the male battalion commanders who said they needed the team in the first place, some were surprised &ldquo;at how much they gained so quickly.&rdquo;

&ldquo;There&rsquo;s an irony that, basically, because Afghan women are so restricted and won&rsquo;t be let out of their houses, American women have to be let off the [base],&rdquo; Sherwood said.