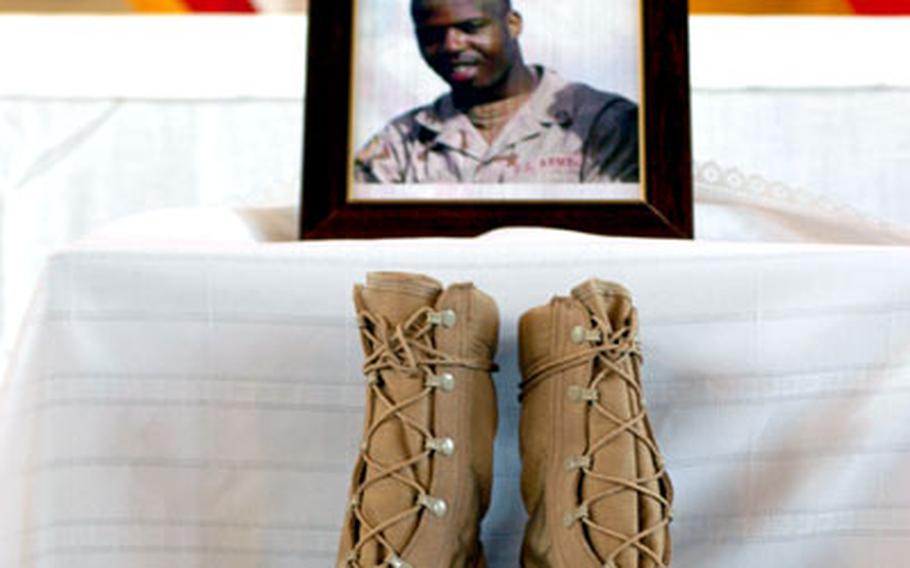 Pfc. Markus Johnson loved his big family and loved his church, but he wanted to see the world.

Like many young men with wanderlust, he joined the Army. Sent to Iraq in February, he couldn&#8217;t wait to go home to Springfield, Mass., this fall to see his family, including his seven brothers and sisters.

But last week, Johnson, 21, of the 1st Infantry Division&#8217;s 4th Battalion, 3rd Air Defense Artillery, died in Iraq. Serving as gunner in an Avenger &#8212; a Humvee modified with a mobile surface-to-air missile system &#8212; he was killed June 1 when the vehicle rolled over in al Anbar province, west of Baghdad.

Members of the unit&#8217;s rear detachment gathered Tuesday at Larson Barracks in Kitzingen, Germany, to mourn Johnson. He was the first 4-3 ADA soldier killed in Iraq, and the second from Kitzingen.

Johnson graduated from Springfield Central High School, where he played drums and basketball, and spent a year at community college before enlisting in the Army in March 2003.

Last August, he arrived in Kitzingen just after the unit learned it was deploying to Iraq. He was assigned to Battery D, whose members call themselves the &#8220;Delta Dawgs.&#8221;

He threw himself into his training and never gave up in the face of a challenge, according to fellow soldiers in Iraq whose comments were read at Tuesday&#8217;s service.

&#8220;He completed every task with confidence and carried himself with a quiet confidence that became his trademark,&#8221; said Sgt. Anthony J. Spatacino.

Sgt. Reginald Jordan said he and Johnson used to talk about their shared dream of becoming police officers. He described Johnson as &#8220;a young man with a bright plan on his life to fulfill.&#8221;

He was always concerned about everyone but himself, his stepfather, Lawrence Thomas, told The Boston Globe last week.

His mother, Sandra Thomas, said her son was nervous at first about going to Iraq but settled down once he got there.