Feeling the burn? It’s time for a break 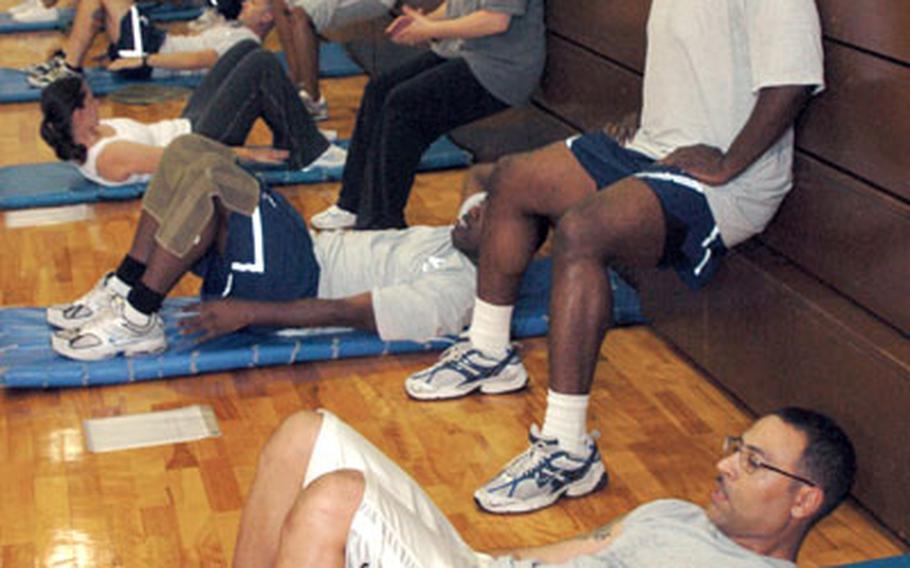 Airmen from 374th Squadron, participate in a circuit class in the Samurai Fitness center. (Christopher B. Stoltz / S&S)

No pain. No gain.

But a doctor at U.S. Naval Hospital Okinawa on Camp Lester says people should listen to their bodies.

Most running injuries are from overuse, said Lt. Cmdr. Laura Wegemann, head of physical and occupational therapy at the hospital.

People push their bodies hard and then don&#8217;t adequately recover before repeating the punishment, Wegemann explained.

A common running overuse injury is runner&#8217;s knee, pain around the kneecap, she said.

Pain on the outer knee, shin splints and stress fractures of the feet and shins are also common.

Running generates forces several times your body weight that are transmitted through the feet, up the legs and knees and to the back, Wegemann said, explaining that joints can withstand the impact of normal running, but not overuse or misuse.

Past injuries, being overweight, alignment problems and training errors also can &#8220;change the stresses to the joints and set the stage for damage,&#8221; Wegemann said.

Treadmills or running tracks are best, and even a groomed running trail is OK, she said.

But she stressed that untended dirt trails, grass and beaches are tricky because of irregular surfaces and slopes.

And if it&#8217;s a choice between an asphalt road or a concrete sidewalk, choose the asphalt, she said.

She advises runners to wear the proper footgear for their foot type and replace running shoes regularly. Warming up before a run and cooling down and stretching afterward also decreases the likelihood of injury, she said.

The most important tip is to gradually increase any aspect of training, she said.

Pay attention to pain that increases through a run or doesn&#8217;t go away within a couple of hours after running, and to joint pain that interferes with normal daily activity or joint swelling, she said.

&#8220;If you develop a running injury, decrease your activity to levels that are relatively pain-free and then gradually increase as your symptoms improve,&#8221; she said. &#8220;Seek medical care if your symptoms don&#8217;t improve within a couple of weeks, or sooner for severe pain.&#8221;

She urges leaders of group or unit exercise sessions to seek training about safe-exercise principles.