Federal hiring freeze could cause more disruptions to military services 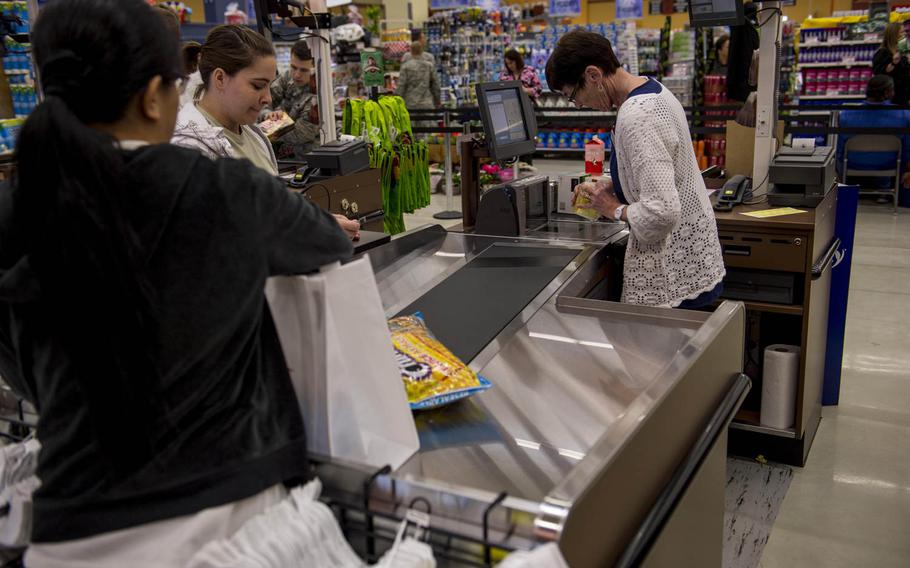 A customer checks out at the cash register inside the new Spangdahlem commissary during the grand opening of the facility on Thursday, May 19, 2016, at Spangdahlem Air Base, Germany. Commissaries are among the facilities struggling with the hiring freeze. (Rusty Frank/U.S. Air Force)

Staff shortages have already forced cutbacks in some child care services at U.S. military installations in the wake of Trump’s hiring freeze, which bans the Defense Department from hiring replacements for most employees who quit their jobs.

In addition to child care issues, commissaries and exchanges around the world report longer-than-usual lines. Some facilities have been forced to close or curb operating hours due to a shortage of employees, according to spokesmen for the organizations that run the on-post stores.

Thousands of jobs at the Defense Commissary Agency’s stores and hundreds of service-run exchanges cannot be filled until the 90-day hiring freeze that Trump ordered Jan. 23 is lifted.

It is difficult to track down exactly how many jobs have been impacted by the hiring freeze, even in specific categories such as child care. Defense Department spokesman Johnny Michael said the department is in the process of collecting data from across its force to assess the hiring freeze’s impact on the military. But even weeks after that process began, he said the Defense Department had no specific information it could provide.

The freeze has come at an already-difficult time for some of these programs, including the Army’s Morale, Welfare and Recreation programs that have in recent years faced restructuring and budget cuts from sequestration among other factors, said Nate Allen, a spokesman for the Army’s Installation Management Command based in San Antonio, Texas.

“It has accelerated issues for hiring and filling vacancies and staffing across the board,” Allen said Friday.

He added it also complicates the restructuring process because, during the hiring freeze, the Army cannot move civilian employees from one installation to another to fill demand.

“So one installation may have an abundance of people in one particular occupational specialty, while at another [installation] there may be a great need for that same position – we cannot move those people to fit those demands,” Allen said.

It also has the potential to impact funding for Morale, Welfare and Recreation programs, which are funded in part by profits from on-post businesses, he said. If those services are forced to reduce hours because of smaller staffs, it would mean less money pouring into the MWR programs designed to aid families with the challenges of military life.

“It all ties together,” Allen said.

More than a handful of U.S. military installations announced last week that they had altered child care services due to a shortage of staff. Those installations have been able to maintain the Defense Department-mandated full day care programs, but reductions in hourly day care services have occurred at the Marine Corps’ Camp Lejeune in North Carolina as well as at the Army’s Fort Drum in New York, Fort Knox in Kentucky and at several posts in Germany, including in Kaiserslautern and Wiesbaden. Though a Defense Department memo on Feb. 1 addressing Trump’s hiring freeze specifically exempts 16 categories of federal workers from the hiring freeze, including child care providers, those positions must still be approved by a commander before they can be filled.

Still, filling child care positions can be an especially tedious process, even without the addition of command approval, Allen said. It typically takes between 80 and 120 days to hire a child care provider because of the stringent background check process and other necessary certifications.

But other family services have not been exempted from the freeze. Officials for military commissaries and exchanges, which have high turnover rates, often in the 20 to 30 percent per year range, have applied for exemptions with the Defense Department. It is not clear whether commissaries and exchanges will receive permission to fill any jobs during the hiring freeze.

The Pentagon is considering “concerns raised regarding commissaries and exchanges to determine if exemptions should be granted,” said Michael, the Defense Department spokesman.

“The hiring freeze affecting all government employees is now affecting our ability to conduct business as usual,” a Camp Lejeune Marine Corps Community Services statement announcing the changes read. “Our highly transient workforce … requires us to constantly hire in order to maintain adequately staffed programs and facilities at standard level. As we continue to be included in the hiring freeze, and our current staffing levels continue to be reduced, it has become necessary to alter our current operations, either by temporarily consolidating services, curtailing hours of operation, suspending programs or closing facilities.”

Officials at Joint Base Lewis-McChord in Washington, Davis-Monthan Air Force Base in Arizona and Fort Bliss in Texas reported similar service reductions.

“The exchange is dealing with the impact by increasing hours of associates, reducing hours of operation as needed and delaying planned openings of some new [shops],” said Chris Ward, a spokesman for the Army and Air Force Exchange Service, which provides tax-free goods to servicemembers, their families and veterans. “Reductions in hours and closures are not something that we take lightly and are a means of last resort.”

Navy exchanges and the Defense Commissary Agency have so far avoided reducing service hours at their stores, officials said.

But Navy exchanges have faced behind-the-scenes “strains” from jobs in merchandising and distribution impacted by the hiring freeze, said Kristine Sturkie, a spokeswoman for Navy Exchange Service Command.

“At this point, we have been able to minimize the impacts to the customer experience while accepting some risks in the back of the house operations,” she said. “A prolonged hiring freeze could change this situation.”

Kevin Robinson, a spokesman for the Defense Commissary Agency, said with more than 1,600 vacant positions subject to the freeze, including 83 in management, part-time commissary employees have been forced to work longer hours at many of the agency’s 283 stores. Commissaries, by law, provide servicemembers and their families groceries at cost plus five percent.

“We are beginning to see longer lines in at the cash register in a few locations,” Robinson said. “If the hiring freeze continues for an extended duration, we may eventually be forced to temporarily cut services or reduce days or hours, if staffing problems occur.”

The Defense Department is operating with the assumption that Trump’s hiring freeze will end at the conclusion of the 90 days, said Michael, the Pentagon spokesman. But the wording in the executive order leaves the exact end date of the hiring freeze somewhat flexible.

It states the hiring freeze will “expire” once the director of the Office of Management and Budget implements “a long-term plan to reduce the size of the federal government’s workforce through attrition.”

If the hiring freeze does continue past late April, it could drag into the military’s typical permanent change of station season, when thousands of servicemembers change assignments during the summer months while schools are out.

“That [permanent change of station] factor is a major issue for commanders who have to plan how to deal with the empty positions and for the families,” he said. “When PCS season roles out, if this freeze is still in place, it will add an additional layer of difficulty for everyone.”