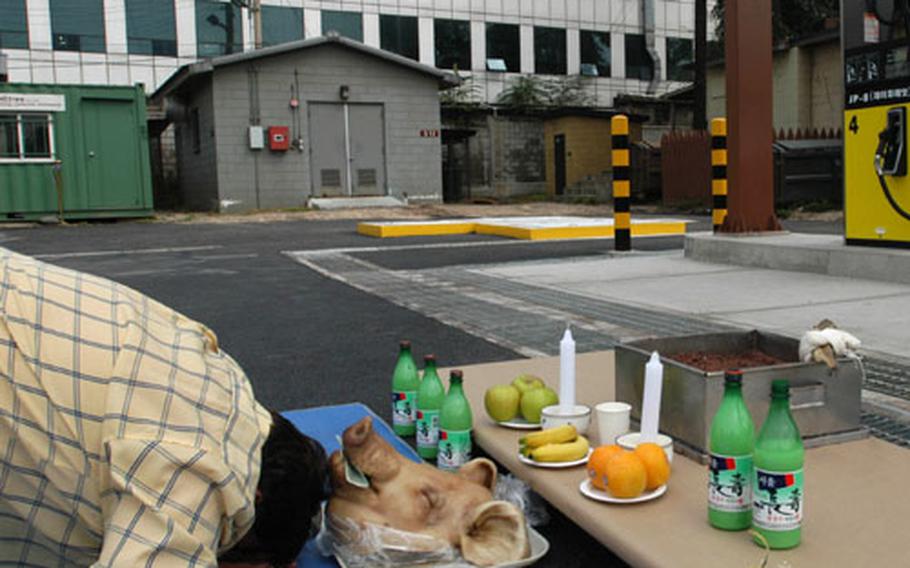 Ken Pickler, chief of the transportation branch for the Far East District Corps of Engineers, bows before a pig&#39;s head during a ceremony Thursday for the opening of a two-pump gas station at the FED Compound. It&#39;s a Korean tradition to put money in the pig&#39;s head as a way to bring good luck. (Jeremy Kirk / S&S)

The two-pump station replaces a 1960s-era pump and tank that leaked. The new facility has two 1,000-gallon fuel tanks &#8212; one for JP8 and another for gasoline &#8212; with double Fiberglas walls, said Ken Estabrook, FED chief of facility management.

The work was performed by Pinetree Environmental, a South Korean company that has built 14 other service stations at U.S. installations on the peninsula, said Martin Jung, the company&#8217;s project manager. The new station cost about $220,000.

The station has a special skimmer system to collect runoff in case of a spill, which uses gravity to separate water from fuel, Estabrook said.

The station also has an alarm system to warn of a leak in the tank, Estabrook said. The station conforms to California construction standards.

The emphasis is on the environment, said Bill Yerabek, the FED&#8217;s chief of logistics management. &#8220;We want to be good environmental stewards,&#8221; he said.

Officials held an opening ceremony with the pig&#8217;s head as the centerpiece. Pigs are considered good luck in Korea and often used at the opening of new stores or businesses.