A vehicle is attached to the underbelly of a Chinook helicopter during a sling-load training exercise Tuesday at Camp Mobile. (Jon Rabiroff / S&S)

A vehicle is attached to the underbelly of a Chinook helicopter during a sling-load training exercise Tuesday at Camp Mobile. (Jon Rabiroff / S&S) A member of a Chinook crew helps guide the helicopter down low enough so Pfc. Joseph Thames, Pfc. Leonard Ahmai and Staff Sgt. James Green can attach a vehicle to it. (Jon Rabiroff / S&S) 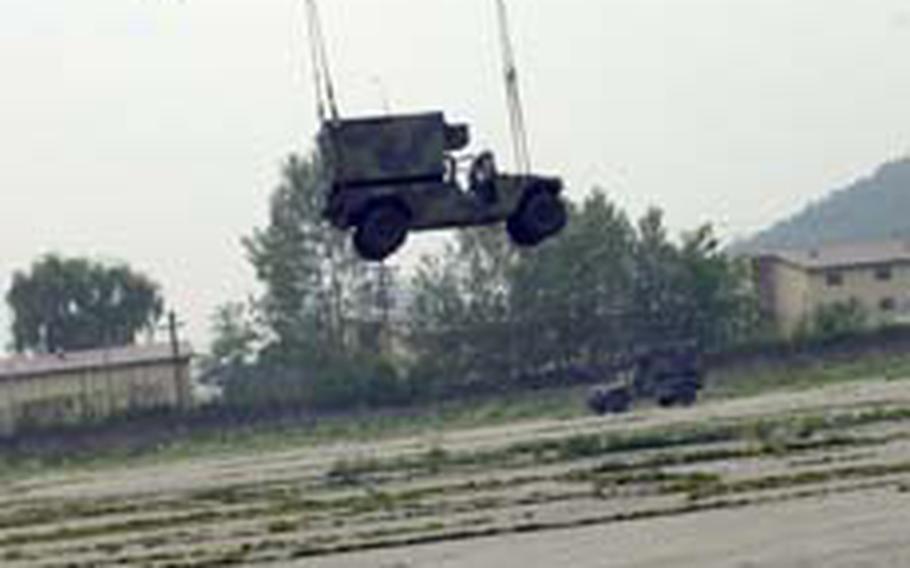 Members of the 304th Integrated Theater Signal Battalion look on as a Chinook helicopter heads back to Camp Humphreys. (Jon Rabiroff / S&S) Members of the 304th Integrated Theater Signal Battalion shield their faces from flying debris as they watch a Chinook fly away. (Jon Rabiroff / S&S) 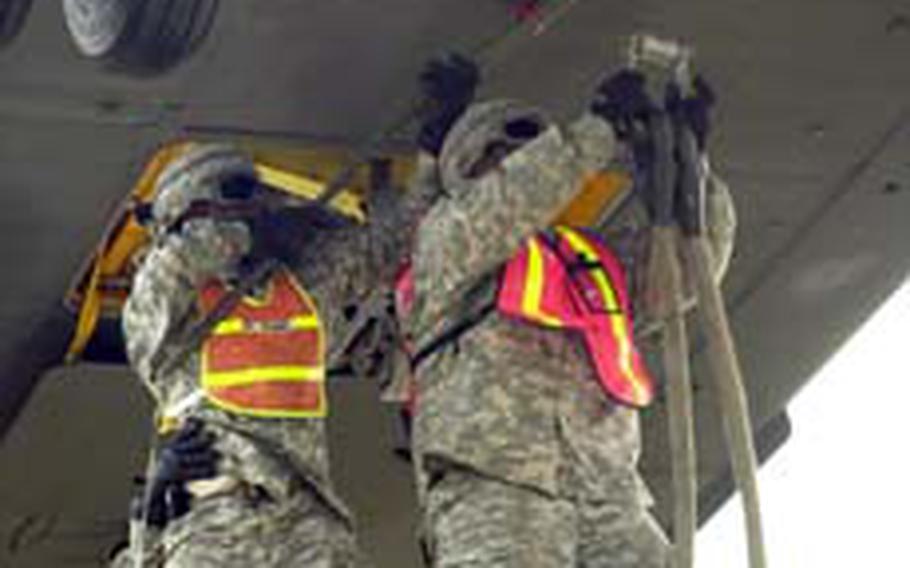 Pfc. Joseph Thames, left, hooks a ground rod to the underbelly of a Chinook hovering overhead as Pfc. Leonard Ahmai prepares to attach cables from a vehicle below to the helicopter during a sling-load training exercise Tuesday at Camp Mobile. (Jon Rabiroff / S&S)

CAMP MOBILE, South Korea &#8212; Pfc. Joseph Thames was not shy in admitting how he felt as 16 tons of Chinook lowered over him as he prepared to help strap a vehicle onto the helicopter&#8217;s underbelly.

Thames was one of about 30 soldiers from the 304th Integrated Theater Signal Battalion taking part in a sling-load exercise Tuesday.

Two helicopters from Camp Humphreys flew 80 miles north, each with a vehicle hanging below, to Camp Mobile. Once at Mobile, each gently dropped off its vehicle on an airfield, landed to unload and pick up passengers, then took off and hovered while another vehicle was attached for the return trip to Humphreys.

Capt. Jonathan Swan, speaking last month before fog forced the training to be postponed, said the exercise simulates the transport of equipment to and from remote locations, something that would likely come into play if "North Korea decides to do whatever they do."

In recent weeks, North Korea has taken a number of aggressive actions and issued threatening statements toward the United States, South Korea and other countries.

If North Korea were to follow through on its threats, Swan said, roads around South Korea would likely be jammed in the ensuing "chaos."

"If we have to move something to the south end of the peninsula, this is the fastest way to do it rather than sitting in traffic," he said.

While speed is of the essence in a sling-load operation "when there&#8217;s enemy involved," Swan said his unit need not try to emulate a NASCAR pit crew during the exercise.

Staff Sgt. James Green &#8212; a veteran of more than a dozen sling-load operations who joined first-timers Thames and Pfc. Leonard Ahmai on the roof of the two vehicles hitched to the bottom of the Chinooks on Tuesday &#8212; said the job takes a special kind of courage and concentration.

First, he said, a grounding rod has to be attached to the helicopter because of the static electricity the Chinook has built up.

Then, Green said, those hooking the equipment to the helicopter have to overcome "that initial fear when that Chinook is coming, and all that wind starts hitting them, and it&#8217;s like, &#8216;Wow, this big helicopter is hovering over me.&#8217;"

"The whole process is actually very easy," he continued. "Once you get past that mental part, you&#8217;re straight."

After the second helicopter was sent on its way Tuesday, Ahmai said, "It was exciting to say the least. Just the sheer force of the rotor wash &#8212; I wasn&#8217;t expecting it to be that intense.