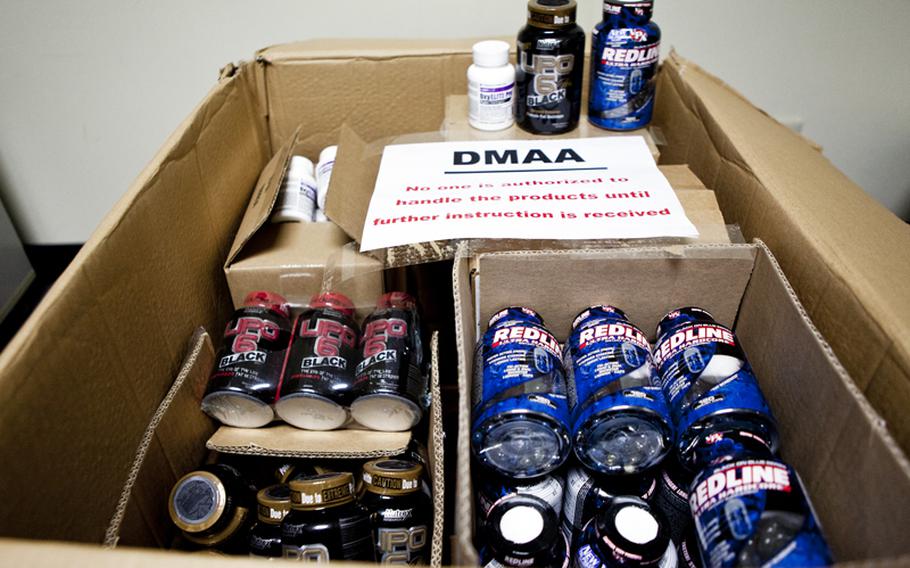 The agency has determined DMAA - which is sold as 1,3-dimethylamylamine, methylhexanamine, or geranium extract - is a synthetic substance that could cause heart attacks by elevating blood pressure in users. There have been 42 public complaints about products containing DMAA, indicating it might be linked to other serious health effects including nervous system and psychiatric disorders as well as death, the agency said Friday in a news release.

Products containing DMAA were pulled from military exchange store shelves in December. The substance has fallen under increasing scrutiny since Stars and Stripes reported that DMAA was found during toxicology tests of two soldiers who suffered heart attacks and died during physical training at a base in the Southwest U.S.

In light of those deaths and other complaints, the Army Public Health Command initiated a case control study on the effects of DMAA to determine if there is a link between the use of the substance and reports of dangerous health conditions. The Army review was expected to include testing on servicemembers, Stars and Stripes reported in March.

It was not immediately clear whether last week's move by the FDA would affect the DOD review.

The controversy around DMAA has centered on whether it is a natural substance found in the edible geranium plant or it is produced synthetically. Many experts believed DMAA is an amphetamine-like substance that is produced in laboratories, and therefore must undergo rigorous, government-supervised testing and be approved as a drug by the FDA.

On Friday, the FDA said it had warned 10 manufacturers of DMAA supplements that they are selling a newly developed synthetic substance and are violating federal law by not providing evidence of its safety, according to copies of the letters provided by the agency.

"Failure to immediately cease distribution of your product ... could result in enforcement action by FDA without further notice," the letter reads. Enforcement action could include a court injunction ordering the company to stop distribution, or possible seizure of the DMAA products, according to the FDA.

"Before marketing products containing DMAA, manufacturers and distributors have a responsibility under the law to provide evidence of the safety of their products. They haven't done that and that makes the products adulterated," Daniel Fabricant, director of the FDA's Dietary Supplement Program, said in the release.

The companies have until May 9 to respond to the FDA warning.

General Nutrition Centers, a top retailer of DMAA products, and USPlabs, which makes the popular Jack3d and OxyElite Pro supplements, have continued to argue that the substance has been widely used without reports of harmful side effects.

USPlabs has pointed to private studies recently published by an online medical journal showing DMAA has similar effects as caffeine and did not significantly raise the heart rate of test subjects.

A third company, iSatori Technologies, which produces the DMAA supplement PWR, released a statement Friday saying it "will respond to the warning letter with a detailed legal and scientific rationale" but it has already made a business decision to remove DMAA from its product due to low sales.

The federal warning and the military investigation come about six years after DMAA hit the fitness supplement market in the United States. It has since been banned by Major League Baseball and the World Anti-Doping Agency as a performance-enhancing drug. The governments of Canada and New Zealand have also recently banned it as an unapproved synthetic drug.

Still, the public and even servicemembers have had easy access to the supplement online and in stores. GNC said it has sold about 440 million supplements containing DMAA since 2007.