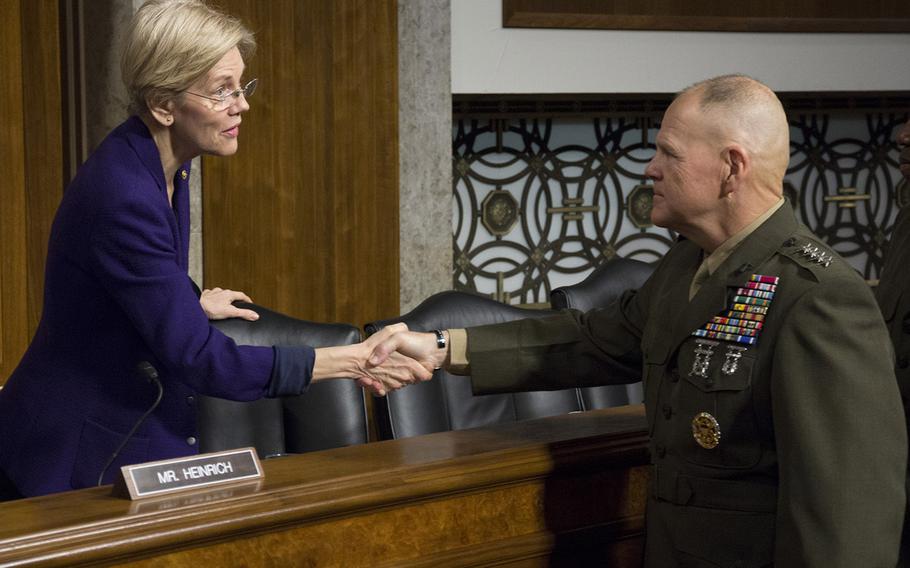 WASHINGTON — The sharing of nude photographs of female servicemembers on websites could span the entire Defense Department as the criminal investigation agencies of the Army, Air Force and Coast Guard opened inquiries into the illicit activity.

The investigations were launched in the wake of a nude-photo sharing scandal in the Marine Corps that forced its top general and the acting Navy secretary to testify in front of House and Senate lawmakers this week. The allegations that active and veteran Marines on a private Facebook page called Marines United shared hundreds of photographs – some nude – of female Marines were made in a March 4 report by nonprofit news agency The Center for Investigative Reporting and veterans’ news website The War Horse.

The Naval Criminal Investigative Service launched a criminal probe into the Facebook group, and on Friday expanded its investigation to other sites on the internet.

The San Diego Union-Tribune reported on Friday that the investigation expanded even further with the creation of a Military Criminal Organization Task Force that includes the FBI. NCIS also announced in a statement that it might seek charges against some of the people involved.

However, some defense officials have expressed concern that people directly involved in the scandal could go unpunished because of limitations of the Uniform Code of Military Justice and the nature of anonymous Internet activity.

NCIS said Friday that it has identified 1,253 Marines United page members, including 725 active-duty and 150 Reserve Marines, as well as 15 sailors. But the identification of names did not mean those individuals were involved in wrongdoing or criminal activity, said a defense official who asked for anonymity because he was not cleared to speak publicly about the investigation.

Now the Army, Air Force and Coast Guard are involved in the investigation, according to Curtis Evans, an NCIS division chief.

Christopher Grey, a spokesman for the Army Criminal Investigative Command, called the probe “preliminary” and said such investigations take time to develop.

Neither the Army nor the Air Force has launched a criminal investigation, Grey and Anderson said.

Stars and Stripes, and other news outlets, have identified at least two additional web pages where anonymous users – many of them claiming to be active-duty servicemembers – regularly share explicit photographs of women they purport to be members of the military.

The Army and Air Force are aware of the existence of at least one of the websites where the photographs are being shared, Grey and Anderson said.

Business Insider first reported on such a website, where anonymous message board posters refer to nude photographs as “wins.” On that website, users – including some who claim to be members of Marines United – often solicit others for photographs of women, posting innocuous photos apparently stolen from other social media sites and sometimes including information such as a first name, service and base.

“It is a fairly simple process for investigators to prosecute someone in the military who took unsolicited photographs of women when they had the expectation of privacy,” the official said. “It will be more difficult when someone is sharing a photo that was meant for their eyes only, but then he went and posted it online for whatever reason – we don’t have a direct answer for that.”

Prosecutors could seek punishment under UCMJ Article 134, known as the general article, which covers nonspecific actions that disrupt good order and discipline or bring discredit upon the armed forces, said Eric Carpenter, an assistant law professor at Florida International University in Miami and a former Army defense attorney and prosecutor.

Prosecuting suspects under Article 134 can be problematic because there are no set punishment parameters. A judge would have to determine punishment after hearing arguments from prosecutors and defense attorneys.

“If Congress amended the current statute to criminalize the posting of nude photos of servicemembers that were consensual when taken but posted without consent, that would make prosecuting these cases even easier,” Carpenter said. “A statute like this would also likely be constitutional.”

Stars and Stripes reporter Travis Tritten contributed to this story.