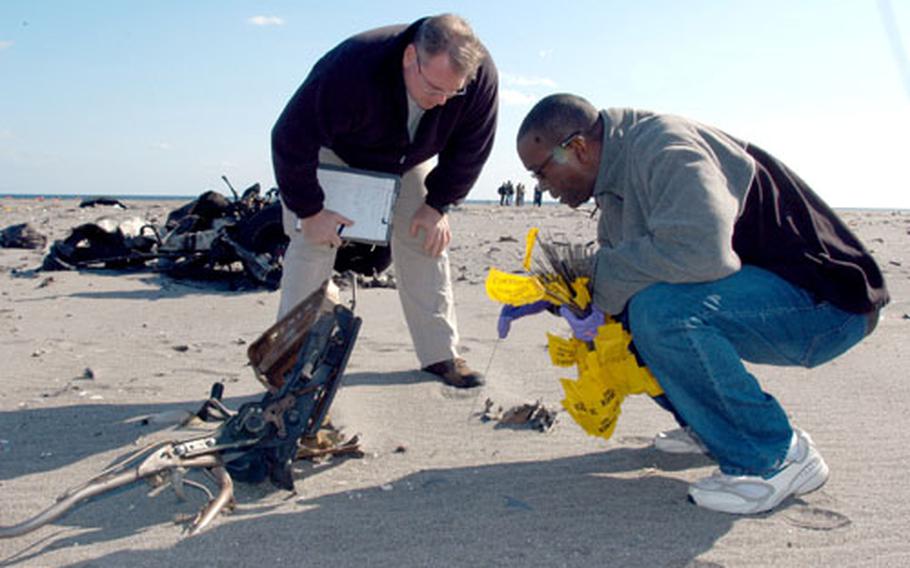 AMAGAMORI, Japan &#8212; The charred heap of twisted metal on this beach north of Misawa cooled overnight after a spectacular explosion Tuesday.

They found them, scattered, in bits and shards &#8212; but they did find them. For the 69 Japanese and U.S. students from across the Pacific, it&#8217;s among the most important lessons of the FBI&#8217;s Large Vehicle Bomb Post Blast Crime Scene School this week at and near Misawa Air Base.

&#8220;After you go to one of these classes, you realize there&#8217;s no such thing as vaporization,&#8221; said Special Agent Kevin Miles, a bomb technician from the FBI&#8217;s Los Angeles office. &#8220;The biggest challenge is getting people in the mind-set where they believe that there is evidence out there.&#8221;

The FBI bomb school was established after the Alfred P. Murrah Federal Building in Oklahoma City was bombed in 1995, Miles said. Its students learn what to look for and how to document and present evidence of terrorist car or truck bomb blasts to withstand legal scrutiny.

Before Sept. 11, 2001, most students were police officers, he said. Now about half are military personnel. &#8220;These are the threats our guys deal with in Iraq,&#8221; Afghanistan and elsewhere, he said.

The Misawa training, the 74th class since the school began in 1997, was the largest to date, the second one overseas and the first in Japan. Attendees included Navy, Marine and Air Force crime scene investigators and bomb specialists from mainland Japan, Okinawa, South Korea, Guam and Singapore. Japanese police, who would respond in the event of off-base large-vehicle explosions, also took part, Miles said. Military officials said the FBI funded the training and didn&#8217;t charge to attend.

Miles said students were told five vehicle bombs exploded Tuesday night almost at once &#8212; three at one of the base entry gates, two at off-base establishments near the main gate. On Wednesday, they formed teams and fanned out across the beach to begin solving the puzzle.

&#8220;This is a good introduction to post-blast crime scene training,&#8221; said Brian Curley, an NCIS agent from Singapore. &#8220;In this part of the world we see these types of violent acts. To have these skills is going to be especially valuable.&#8221;

Miles said the scenarios re-created the bomb types used in Madrid and London &#8212; though, unlike in London, suicide bombers were not part of the script. A battery, firing and arming switch and wires, a backpack and briefcase were placed in the vehicles before detonation. The students knew none of this and were to present their findings on Friday.