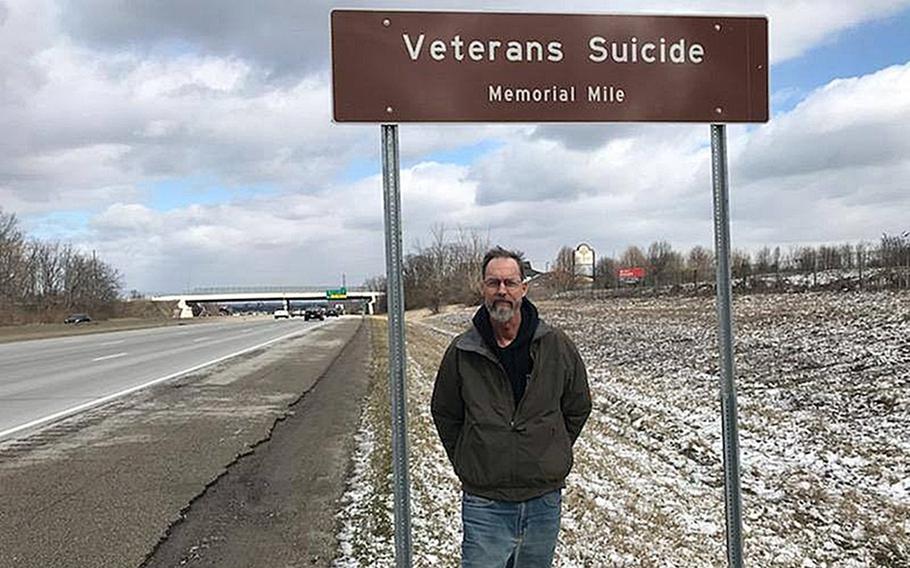 Howard Berry at mile marker 22 on I-71 in Ohio, designated as Veterans Suicide Memorial Mile. Berry, who spent seven years working to get a Purple Heart for his son and sought to raise awareness about veteran suicide, died last month after a battle with cancer. (GoFundMe)

Howard Berry at mile marker 22 on I-71 in Ohio, designated as Veterans Suicide Memorial Mile. Berry, who spent seven years working to get a Purple Heart for his son and sought to raise awareness about veteran suicide, died last month after a battle with cancer. (GoFundMe) 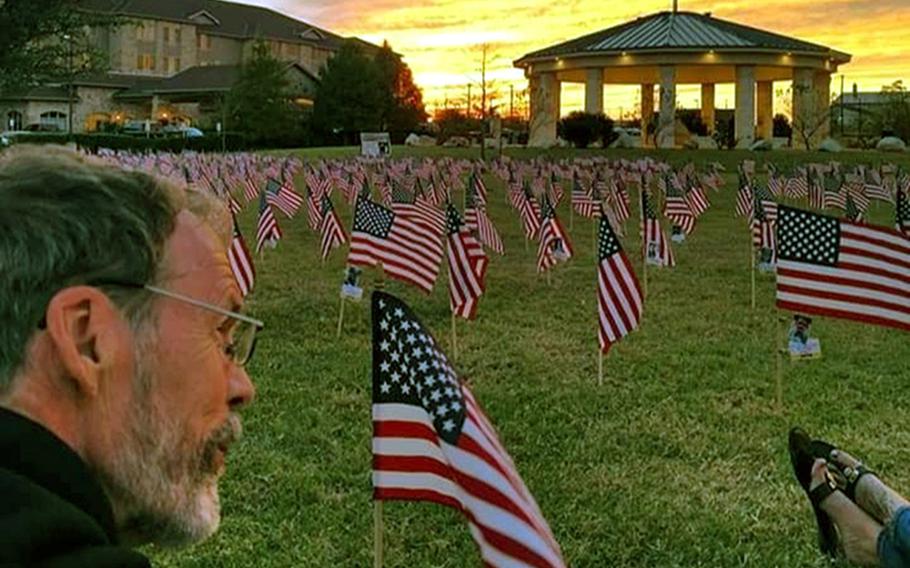 Howard Berry sits among rows of American flags. The ''Flags for Forgotten Soldiers'' initiative was a brainchild of Berry, a Cincinnati, Ohio, man who lost his son, Army Staff Sgt. Joshua Berry, to suicide. Berry died last month after a battle with cancer. (GoFundMe) A display of 660 flags meant to raise awareness about veteran suicide in Tuxedo Park, N.C., in 2017. The ''Flags for Forgotten Soldiers'' initiative was a brainchild of Howard Berry, a Cincinnati, Ohio man who lost his son, Army Staff Sgt. Joshua Berry, to suicide. Berry died last month after a battle with cancer. (GoFundMe)

An Ohio man who spent seven years working to get a Purple Heart for his son died last month after a battle with cancer, local news outlets reported.

Howard Berry, 64, had sought unsuccessfully for the medal to recognize his son for wounds he received during the 2009 mass shooting at Fort Hood, Texas, that left 13 dead and 33 wounded.

He also became an advocate for greater attention on veteran suicides after his son, Staff Sgt. Joshua Berry, took his own life in 2013. Joshua Berry had returned from Fort Hood a different person, his father had said, and suffered from depression and post-traumatic stress disorder.

“It’s important to get the Purple Heart for my late son so I can give it to my 9-year-old granddaughter and let her know her daddy was a hero,” Howard Berry told Datyon’s WHIO news station in November.

The younger Berry, an infantryman who’d just returned from an Afghanistan deployment, had dislocated his shoulder diving for cover after warning others to get down when the shooting started, a lawsuit his father filed in 2017 said.

The injury required surgery to fix, said the suit, filed against then-Defense Secretary Jim Mattis and Army Secretary Ryan McCarthy for denying his son the medal, the military’s oldest in continuous use, which is awarded for wounds received from enemy action.

The soldier’s father had pushed for earlier legislation to declare the Fort Hood shooting a terrorist attack and give the victims and their families the same honors and benefits as Americans wounded or killed in battle, including the Purple Heart.

He got 225 members of the House to back the bill, but it was never voted on and never reintroduced. In 2015, the Purple Heart was awarded to survivors of the attack who had been shot, but not to Joshua Berry.

Though ultimately unsuccessful in getting the medal for his son, he continued to raise awareness about the issue of veteran suicides, starting Flags for Forgotten Soldiers three years ago to plant flags at veterans’ graves.

At least 32 states have displayed flags since then, his daughter Alice Berry said on the organization’s GoFundMe page.

“I had a chance to go with him to some of those placements, and it was a sobering experience, often filled with memories of my brother’s passing,” she said.

His son’s cause took him to Washington, D.C., Ohio’s statehouse and Veterans Affairs town hall meetings across Cincinnati, and he’d appeared in the national media, wrote Keith BieryGolick, a reporter who had covered the saga for the Cincinnati Enquirer.

“For better or worse, this fight would come to define him in the last years of his life,” he wrote in an Enquirer column last week.

Not all his efforts ended in defeat. Earlier this year, Ohio designated part of Interstate 71 North at mile marker 22 the Veteran Suicide Memorial Mile, becoming the first state to recognize the issue in that way, local media reported.

In response to a story about his efforts last year, a reader mailed him a letter containing his own father’s Purple Heart, BieryGolick wrote.

“I read about your boy and I know you been through a lot,” said the letter, published in a photo with BieryGolick’s column. “This medal will not bring him back but maybe it will help.”

The reader encouraged the soldier’s father to “keep up the fight.”

Days before Memorial Day this year, the Army again denied Joshua Berry the medal after being ordered by a federal judge to reconsider its decision.

“Howard knew this was coming, but the timing still stung,” BieryGolick wrote.

Berry died about a month later on June 17. He is survived by his wife of 15 years, Mary Jo, two daughters and three granddaughters. He requested that no service be held, an obituary said.

Friends plan to continue his fight, WHIO reported. His sister Lynn Berry Brown vowed to carry on the Flags for Forgotten Soldiers mission, as he’d asked, a post on the organization’s Facebook and GoFundMe pages.

“Recognition of this tragedy is essential, and these moving memorials help open minds and touch hearts,” she wrote of the flag displays.