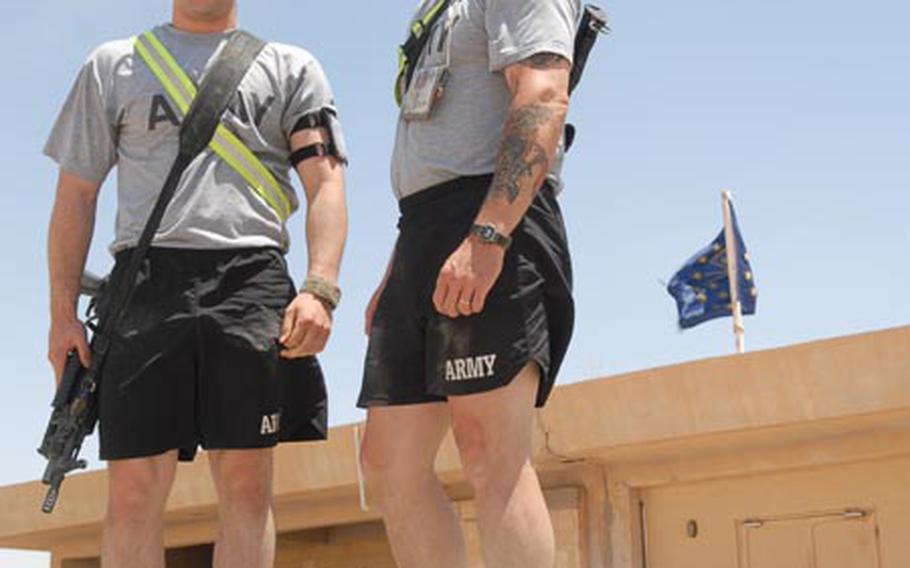 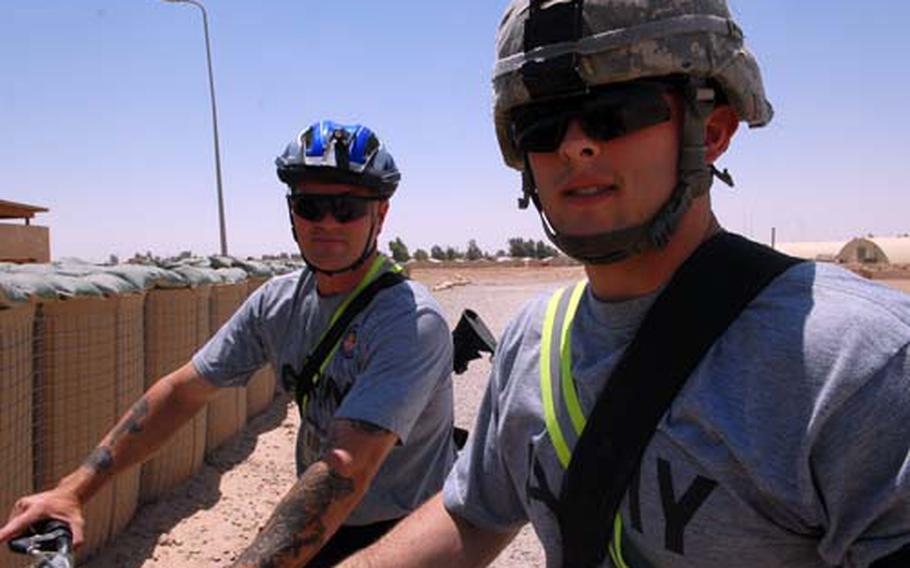 Sgt. Terryll Williams, left, and his son Spc. Mathew Williams sit on their bikes Friday at Forward Operating Base Q-West. The two saw each other only sporadically while Mathew was growing up, but they get to see each other every day now that they’re in the same squad. The elder Williams volunteered to come to Iraq as part of a promise he made to his son. “It’s the right thing to do,” he said. “It’s a rare opportunity.” ()

Mathew, his two brothers and his dad, Sgt. Terryll Williams, were driving in a pickup when the eldest Williams said it sure would be cool if he could find a mini-motorcycle for $150.

Terryll has an uncanny sense for garage sales and enjoys spending his free time scouting for the best items. Within minutes, the group stumbled on one with a motorcycle exactly as Terryll had imagined. He haggled the owner down to $100 and still has the bike to this day.

That recollection is one of the all-too-few memories that 20-year-old Mathew has with his father. Terryll left his sons&#8217; lives when Mathew was about 5 &#8212; taking care of his son through child support instead of hugs and driving lessons in that old pickup.

At first, he saw his children once a week. But Terryll, now 51, was a truck driver, and those visits soon dropped off to maybe once every couple of months, sometimes for as little as a half-hour. They got along well during their brief visits, but it wasn&#8217;t enough. Mathew grew up without his dad, and Terryll grew older without his son.

Several months ago, Mathew, a member of the Indiana National Guard, called his dad to tell him that he planned to volunteer for Iraq with a buddy from college.

Terryll promised to sign up for another tour and go with the Indiana Guard if Mathew went.

The process was unexpectedly easy. Terryll notified his first sergeant, filled out a form and was quickly on his way. Soon enough, he became a team leader in Mathew&#8217;s squad, a part of the 76th A Special Troops Battalion.

Although they&#8217;re in different teams, the work schedule means Mathew is usually the driver for Terryll&#8217;s Humvee. They spend their days together patrolling Q-West, repairing any breaks in the base fence and standing ready in case any insurgents slip inside.

Terryll considers Mathew just another weapon on the squad, and he thinks about the other soldiers just as much when they&#8217;re on a mission. Yet the pair went from seeing each other once every few weeks to seeing each other every day.

The father who never got to teach his son to drive, now rides shotgun with him behind the wheel of a Humvee. The son who didn&#8217;t grow up learning from his father how to be a man, now sees him as a model soldier.

And when they&#8217;re done working together, they&#8217;ll often meet for meals or take lazy rides around the base. They don&#8217;t have that old pickup, of course, but their matching bikes work just fine.

This Father&#8217;s Day, Mathew will take his dad to the chow hall. If they&#8217;re lucky, Dustin will be able to come up from Baghdad. Then the family will bike together to the junkyard on Q-West. It&#8217;s not quite a garage sale, but Terryll still enjoys combing through the wreckage for tools or scraps he can use in some artistic way.

They&#8217;ll be making plenty more memories to go along with that $100 motorcycle.