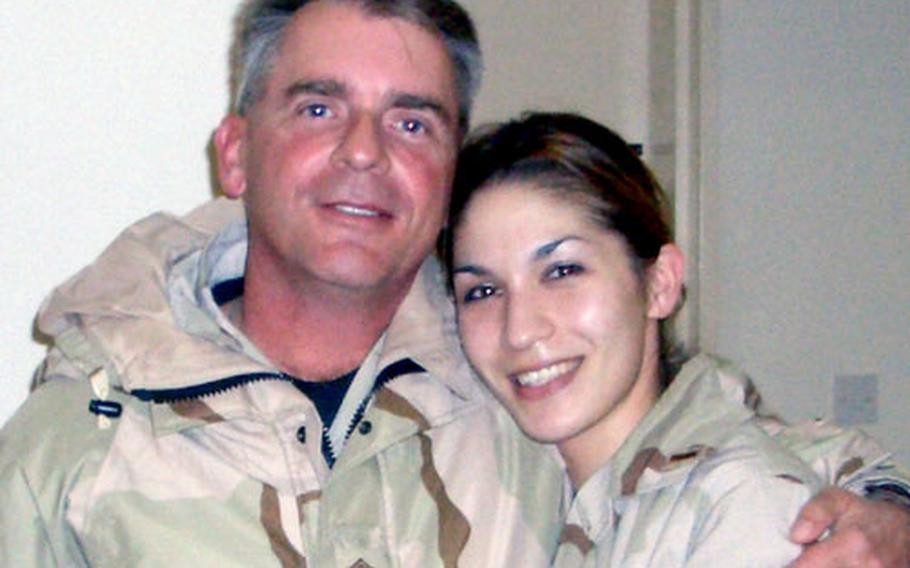 Chief Master Sgt. Brett Allison gives his daughter, 2nd Lt. Sherry Mattson, a hug last month on his surprise visit to Mattson on her deployment to the Middle East. (Courtesy of Brett Allison)

Second Lt. Sherry Mattson thought she was on baggage detail for a couple of distinguished visitors. Little did she expect the surprise she was in for Jan. 19, less than a month into her first Air Force deployment at Al Udeid, Qatar.

The visitors were real, but the baggage duty was a ploy: Into the DV lounge walked Mattson&#8217;s dad, Chief Master Sgt. Brett Allison, who&#8217;s deployed from Misawa Air Base, Japan, to Camp Patriot, Kuwait, where he&#8217;s the camp&#8217;s senior enlisted adviser.

Meeting his daughter in the desert happened by chance, Allison said.

A lieutenant colonel from the Pentagon, deploying into the 586th Expeditionary Mission Support Group &#8212; the parent unit of Allison&#8217;s detachment in Kuwait &#8212; needed an M-4 and arranged to get one from Al Udeid. When some &#8220;opportune airlift&#8221; became available, Allison volunteered his services.

The visit was another chapter in a father&#8217;s and daughter&#8217;s unique and shared military experiences: In May of 2004, Allison commissioned his daughter into the Air Force, and later that same year, Mattson administered her father&#8217;s re-enlistment oath at Misawa.

Allison&#8217;s visit was less than two days, but it was well worth it, he said.