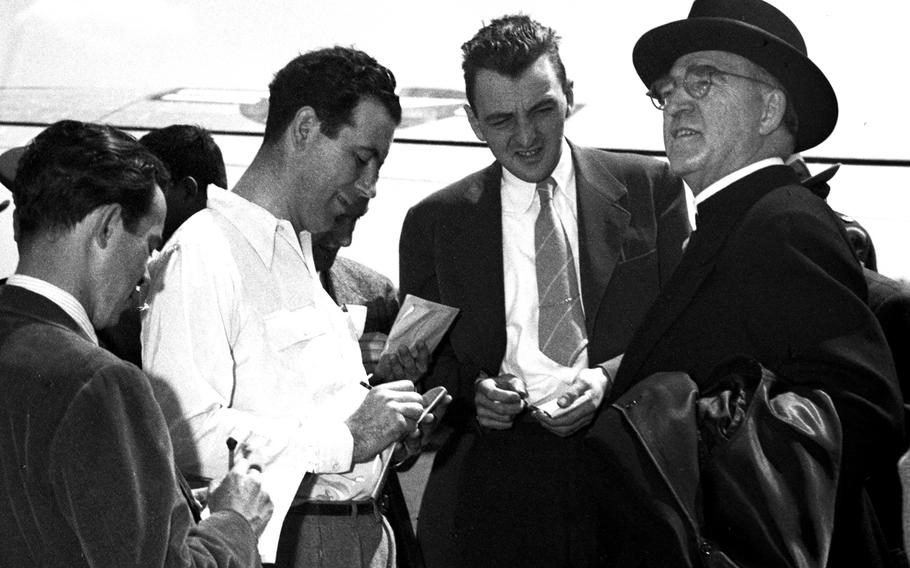 Buy Photo
Msgr. Edward J. Flanagan, founder of the famous Boys Town children's home in Nebraska, talks with reporters at the Rhein-Main airport in May, 1948. (Gerald Waller/Stars and Stripes)

FRANKFURT, May 10 — Father Edward J. Flanagan, founder and head of Boys Town, Nebr., arrived at Rhine Main Air Base here today to begin a two-week study of. youth conditions in the U. S. Zone.

Flanagan, who was met at the airport by Mrs. Clarence R. Huebner, wife of the EUCOM deputy commander, flew in from Vienna where he completed a one-month study of Austrian Youth.

Flanagan met with Huebner this afternoon and will begin a tour of the zone tomorrow to inspect GYA centers and talk to both GYA and German youth.

The Stratton bill "or some other bill which will allow displaced persons to emigrate to the U.S." received Flanagan's full support.

"The DP is the saddest of all persons in Europe," he said.

"It is so difficult for him to know what to do. He has no security. We must give him some type of normal home life. The Stratton bill which will allow DPs into America and action by other nations permitting DPs to emigrate to other places is needed at once."

Flanagan found the Austrian children "ambitious. They want an education," he said.

"In fact, one of the troubles with Austria is that almost everyone has an education. The people are a little too highly educated. They have too many doctors and not enough small businessmen. It is better to have a small business than a degree and no job."