Soldiers from 1st Platoon, Troop C, 6th Squadron, 4th Cavalry Regiment prepare for a patrol at Combat Outpost Lybert in northeastern Afghanistan. The platoon was sent in to reinforce the outpost after it was attacked on Sept. 11, killing one soldier. (Michael Gisick / S&S)

Soldiers from 1st Platoon, Troop C, 6th Squadron, 4th Cavalry Regiment prepare for a patrol at Combat Outpost Lybert in northeastern Afghanistan. The platoon was sent in to reinforce the outpost after it was attacked on Sept. 11, killing one soldier. (Michael Gisick / S&S) 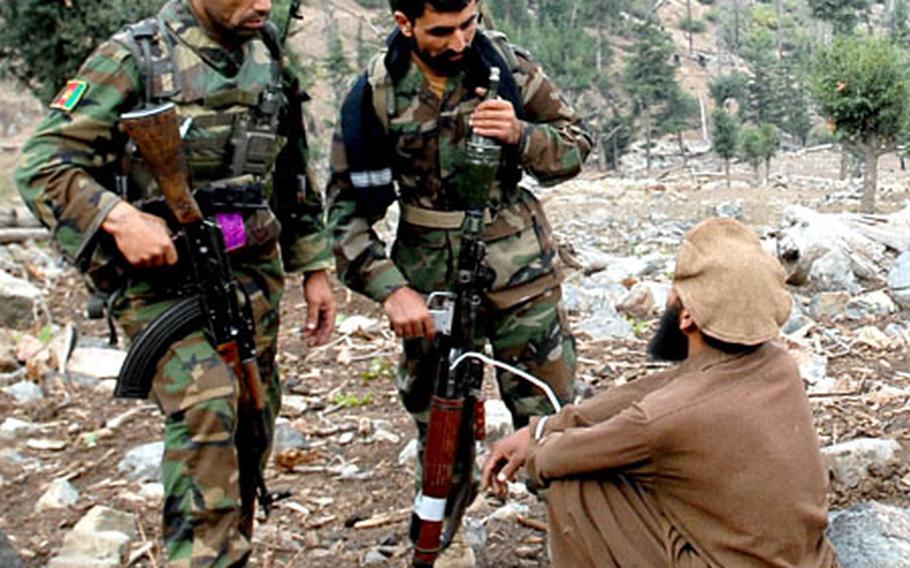 Afghan soldiers question a man found wandering near the site of an attack on a U.S. outpost in northeastern Afghanistan. (Michael Gisick / S&S) 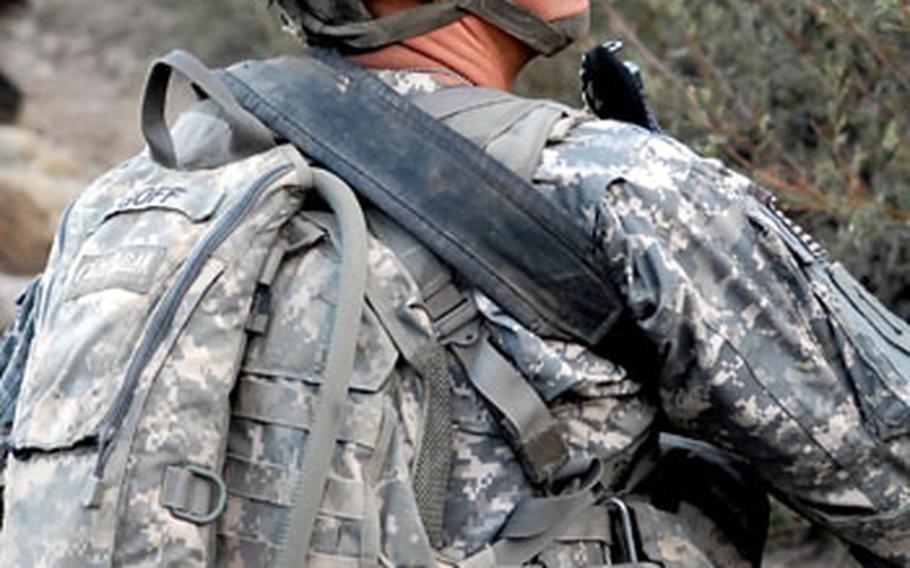 NURISTAN PROVINCE, Afghanistan &#8212; Fire had swept through the pine forests blanketing the mountains around Combat Outpost Lybert a few years ago, before the Americans arrived.

According to the stories they&#8217;ve heard, the fire was set by loggers from Pakistan trying to eliminate their competition. If so, it worked. Broad swaths of scrub, blackened stumps and skeleton trees remain.

The Americans move slowly up through this ghost of a forest in the gray dawn, struggling against the altitude and the incline and their packs and weapons. One of the first things the Marine Corps lieutenant who works with the Afghan soldiers here taught the newly-arrived Army lieutenant was how to tell the Afghans to slow down.

The bullets that rained on Lybert four days earlier came from up this way, at least some of them. But the only presence the patrol finds amid the scattering of abandoned huts and clapboard goat corrals on the mountain is one lone wanderer, wearing brown "man-jammies" and faded yellow shoes decorated with colorful, washed-out polka dots.

This man says he is from Pakistan and has come in search of his lost herd. The U.S. interpreter struggles to understand his dialect, but the Afghan commander, a stubble-faced man with a tattoo of a snake coiled around a dagger on his forearm, doesn&#8217;t believe the story.

First this man says he&#8217;s a Pashtun, the commander, Taj Mohammed, says. And then he says he is a nomad.

"Next he will say he is British," Mohammed concludes.

The Afghans decide to take him back to the camp for questioning. Escorted by an Afghan soldier with a quiver of rocket-propelled grenade rounds strapped to his back, the man follows the patrol as it heads back up against the mountain, his bound hands folded in front of him like a monk with a mystery.

Lybert was built in 2006 as the U.S. military began to step up its presence in Afghanistan&#8217;s eastern mountains. Like many U.S. bases, it was named in memory of a soldier &#8212; Staff Sgt. Patrick Lybert, who was killed in these mountains in June 2006.

Despite its proximity to the border &#8212; and to other U.S. outposts that come under frequent attack &#8212; until recently the troops at Lybert had seen relatively little action. The U.S. unit that left Lybert earlier this summer reported only a pair of attacks during its year at the COP. A platoon from 1st Battalion, 6th Field Artillery Regiment took over in July, and their first few weeks at the outpost led some to expect a quiet deployment.

"It was like a ski resort without the resort," says Staff Sgt. David Joslin, a medic. "It was just beautiful mountains, scenery, get up and see the patients every morning. It was like a normal day-to-day life."

Through July and August, Joslin&#8217;s aid station saw about 500 sick-call patients from the nearby villages. They were simple people, Joslin says. Sometimes the men would get upset when other men received two kinds of pills and they&#8217;d only gotten one kind.

Routines set in. Pvt. Michael Murdock, a 22-year-old artilleryman from North Carolina, fell out with the mortar crew, deciding he wanted to reclassify to the infantry. Pvt. Scott Stokes, a 43-year-old single father who&#8217;d found out he could still join the Army a year earlier when he attended his daughter&#8217;s graduation from basic training, grew close to the young North Carolinian.

"He always told me he wanted to go back home and marry my daughter," Stokes says. "So that was fun."

The first sign of trouble came on Aug. 29, when a trio of bullets narrowly missed soldiers sitting on a porch in front of Joslin&#8217;s aid station. Fitful, half-hearted attacks continued for the next week-and-a-half. A mortar round one day, a few gunshots the next, ricocheting down from the surrounding peaks.

But as it turned out, that was only a prelude.

"How I look at it, the Taliban pretty much saw an opportunity that we were trying to calm down and let the [Afghan army] take over a little bit," says Sgt. Ken Dicristofano, a mortarman who had taken Murdock under his wing. "They saw their chance and they went for it."

The attack started around mid-morning. It was mostly small arms, a few mortars, maybe a machine gun, the soldiers say.

Murdock was in his barracks hut, putting on his body armor, when a bullet cut through the plywood wall and hit him in the side. Along the Hesco barriers and razor wire, the bullets were coming in from three directions while the soldiers fought back. The Afghans manned one end of the camp and the Americans the other. Bullets crashed through the aid station&#8217;s window as Joslin and his medics struggled to keep Murdock alive.

The attack continued for two or three hours. Apache helicopters and a slow-flying A-10 arrived and drove the fighters from the mountains, setting new small fires.

Reinforcements from Lorenz&#8217;s platoon of infantrymen arrived at Lybert two days later and began their dawn patrols in the surrounding mountains. But the decision to close Lybert later this fall had already been announced in the villages, even before the Sept. 11 attack.

Officers say the base is not well situated to guard a nearby pass through the mountains on the border, a fact that might account for the relatively spare history of attacks on the base. And with U.S. troops spread thin across eastern Afghanistan, the soldiers are needed elsewhere.

"When they came down and said we were moving, we were a little upset," says Staff Sgt. Michael Bannin, 27.

The more experienced soldiers say they&#8217;ve seen changes in the younger troops since the attack, a new reality setting in. In the last days of COP Lybert, the reinforcements spend many of their evenings talking on the phone and watching DVDs. The artillerymen mostly keep to their barracks hut. Murdock&#8217;s corner remains empty.

"Unfortunately, the 11th made it real," says 1st Lt. Ian Lipsitz, 24, who leads the artillery platoon. "Real personal for us, real definite that we&#8217;re out here fighting a war."