Fate of US bases depends on Afghanistan’s ability to secure, operate them 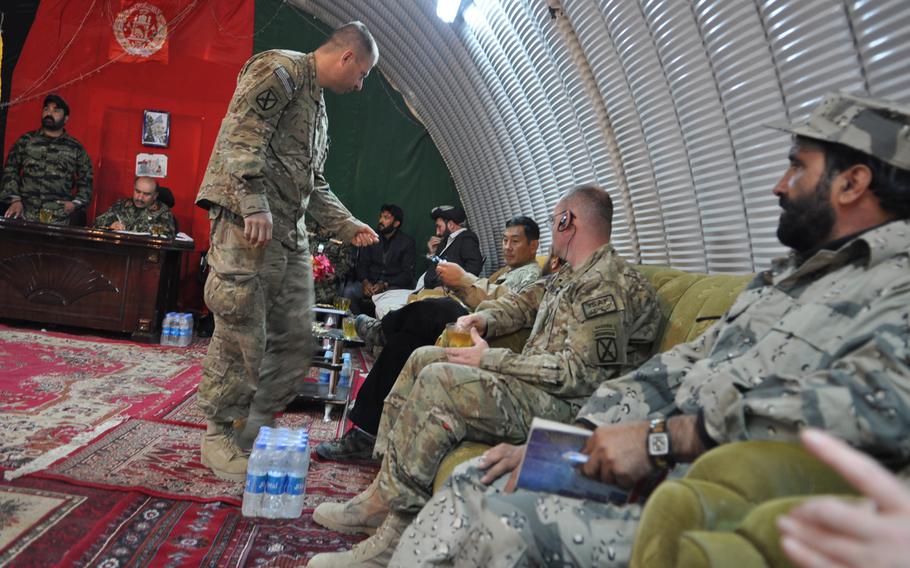 Afghan and American officials, including Maj. Gen. Clarence Chinn, seated third from right, deputy commander of Regional Command East, meet at a security Shura in Paktika province in April as part of negotiations over the future of Forward Operating Base Sharana. (Cid Standifer/Stars and Stripes)

Afghan and American officials, including Maj. Gen. Clarence Chinn, seated third from right, deputy commander of Regional Command East, meet at a security Shura in Paktika province in April as part of negotiations over the future of Forward Operating Base Sharana. (Cid Standifer/Stars and Stripes) 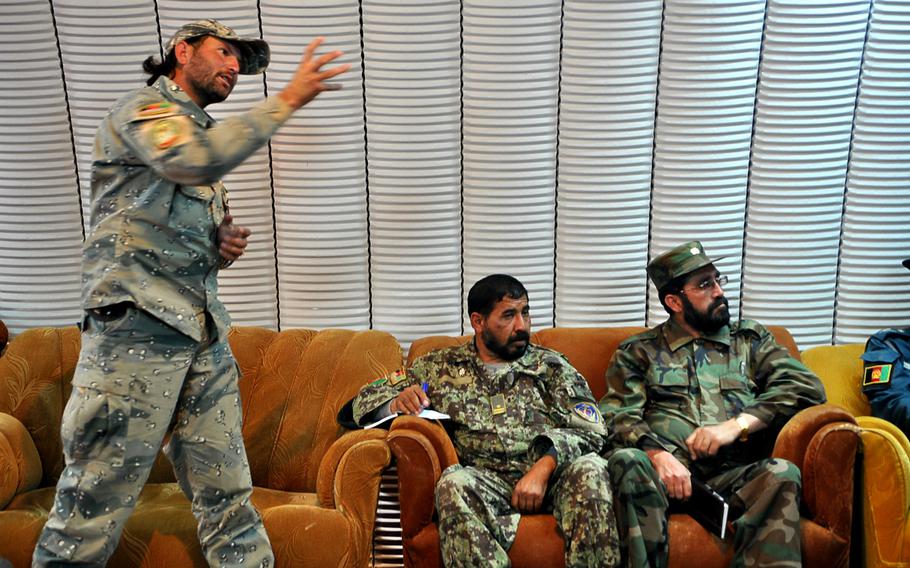 An Afghan Border Police representative at a security Shura in April angrily denounces the decision to tear down a border checkpoint that was run by Afghan contractors working for the Americans. As the U.S. contract ended, the checkpoint was demolished to keep it from falling into the hands of insurgents. The Afghan National Security Forces were having trouble finding soldiers to take over bases from Americans as the International Security Assistance Force shrinks its presence. (Cid Standifer/Stars and Stripes) 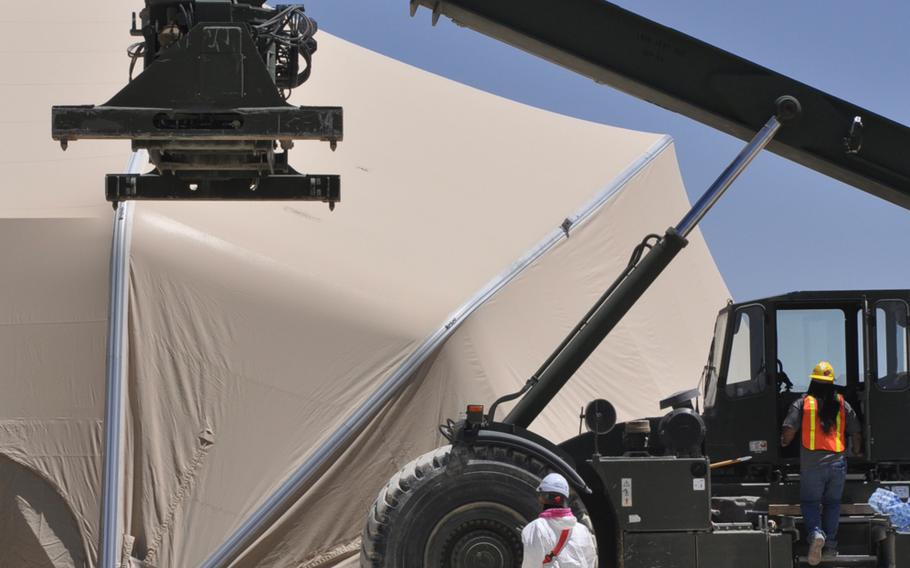 At Forward Operating Base Sharana, American and Afghan officials were trying to make arrangements to transfer the base to Afghan forces. Americans face a deadline to turn the FOB back into dirt by October, if no agreement is reached. (Cid Standifer/Stars and Stripes) 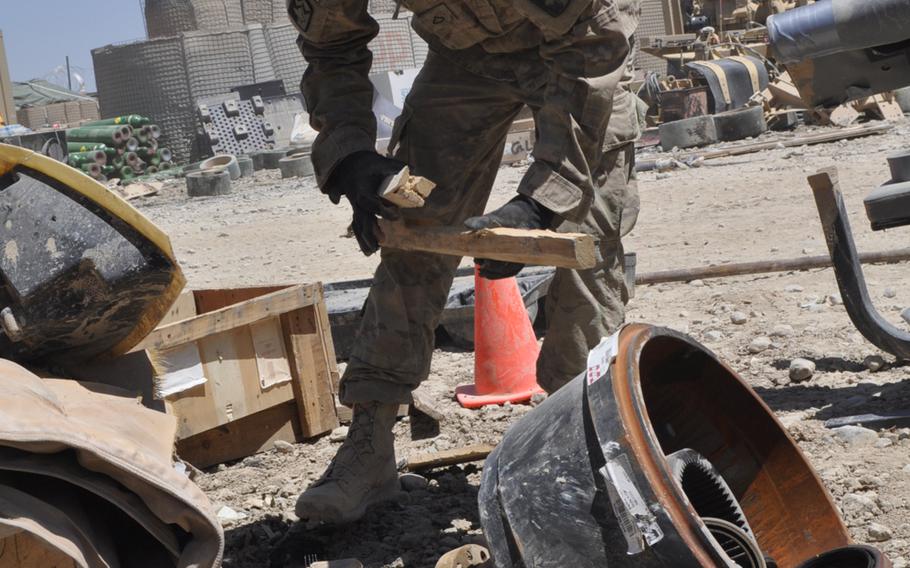 Pfc. Justin Converse of the 289th Quartermaster Company works in the retrograde yard at Forward Operating Base Sharana, sorting equipment and materiel that can be sent back to the U.S., given or sold to Afghans or disposed of. Even as American and Afghan officials try to make arrangements to transfer the base to Afghan forces, Americans are facing a deadline to turn the FOB back into dirt by October. (Cid Standifer/Stars and Stripes)

If Afghan National Security Forces don’t take over here, he says, all of it will soon be bulldozed back to dirt.

Wendland, commander of 2nd Battalion, 15th Field Artillery Regiment, who serves as “mayor” of FOB Sharana, thinks there’s plenty of solid infrastructure here that could be of use to the Afghans, including concrete buildings and two functioning freshwater wells. There’s also an airstrip that could be used by the military or for humanitarian assistance or disaster relief operations. As a civilian airstrip, it could provide impetus to the local economy in this arid expanse near the capitol of Paktika province.

“We don’t want to turn it back into dirt at all,” Wendland said. “Runways are hard to come by in the middle of nowhere.”

Some Afghan officials agree. But if they can’t find the people to man it, it could be turned into wasteland by October.

Two checkpoints on the border between Afghanistan and Pakistan had been the subject of negotiations for six months when the contractors manning them tore one down down last month. Afghan Border Police officers said during a security Shura at the provincial capital attended by local representatives of the Afghan National Security Forces and American advisers that losing the checkpoints could jeopardize the whole area.

“We are ready to stay and defend our country, because the people of Shkin are vulnerable from the Pakistani side,” one member of the Afghan Border police complained at the April meeting. “But at the last minute, you are destroying things without telling us. Why would you do that? It was the wrong decision.”

Shkin is a subdistrict near Bermal District with nominal autonomy. A 2003 story in Time magazine called it “the evilest place in Afghanistan.” That year, it was held by 10th Mountain Division, which is doing another tour of duty there. Col. Dennis Sullivan, head of the 10th Mountain Division’s advisory mission in Paktika, said that in the Bermal area, Shkin has made the most progress toward stability.

According to Sullivan, the checkpoints were staffed by 1,200 Afghan contractors working for the American government. The National Directorate of Security, Afghanistan’s intelligence service, offered to hire them to keep the checkpoints operational, but with many of the details such as supply and medevac capabilities unclear, only 100 were willing to take the offer.

So as the U.S. contract ended, the checkpoint had to be demolished.

“The concern is, if they don’t tear it down, then two days after it’s all over, we’ve got insurgents owning it, and insurgents are now in a position where they can now dominate the area,” Sullivan explained.

Americans and Afghans are still trying to save the remaining checkpoints in the area. One possibility is to ask the head of Paktika province’s Afghan Local Police, Cmdr. Azizullah Azizi, to head a special squad there. Azizi, like most of the contractors, is ethnic Tajik, a minority in Paktika. In a meeting with a local Afghan National Army brigade commander, Brig. Gen. Zemarai Khan, Sullivan said he was counting on ethnic loyalty to keep the contractors in place until a long-term solution could be found.

Another option would be to take a Kandak, an Afghan National Army battalion, away from the district center of Bermal and move it to the checkpoints. That would require leaving FOB Boris, which the ANA splits with American forces, in the hands of the police. As the Americans leave this fall, Sullivan fears that the police there aren’t yet ready for such a task, given difficult tribal politics of the Waziri, who are the dominant ethnic group in this district and across the porous border with Pakistan, which is in sight of the base. Soldiers here say the Waziri are more loyal to their tribe than to Afghanistan or Pakistan, and they are considered generally hostile to the NATO coalition.

With the ANA struggling to take charge of a handful of outposts, the base at Sharana could represent an even bigger manpower sinkhole for the Afghans.

At a meeting of coalition commanders, a U.S. Embassy representative and the deputy governor of Paktika, Attaullah Fazli said the ANA had shown reluctance to take over Sharana, even though he thought part of the base would be ideal for a number of purposes. Some buildings could replace the province’s crowded prison. The base could even be used to temporarily house Paktika’s university.

Karl Olson, a U.S. diplomatic representative stationed at nearby FOB Rushmore, noted in the meeting that there are five groups of “durable” buildings at Sharana that could be useful, but the base’s wastewater treatment plant could be too much for the Afghans to handle.

“The key thing is for the provincial government to focus on what it can realistically sustain and protect,” he stressed.

Sullivan said such difficulty working out the fate of a base was rare, at least in Paktika province. The border checkpoint is the only facility torn down without agreement having been reached on its fate.

“For this year, I think [the disagreement] is somewhat unique to this location,” Sullivan said.

But that could change as the drawdown of international forces accelerates to meet the deadline for all combat troops to be out of Afghanistan by the end of next year, he said. “Maybe in 2014 it could be [a bigger problem], or after that depending on what happens.”