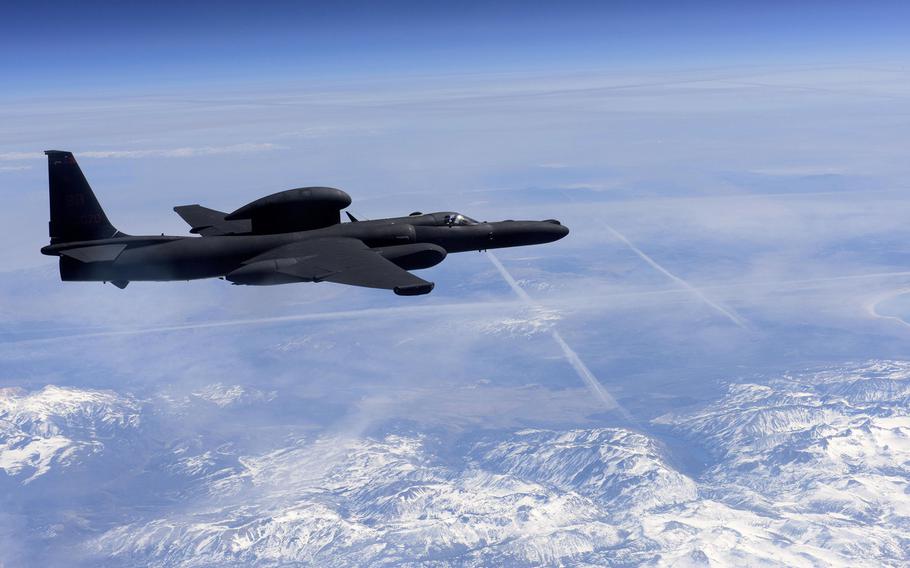 A U-2 Dragon Lady flies above the Sierra Nevada Mountain Range, California, Mar. 23, 2016. In effort to speed up what was previously a six-year process, the U.S. Air Force will for the first time allow undergraduate pilots to enter a direct pipeline to flying the legendary spy plane. (Robert M. Trujillo/U.S. Air Force)

The obstacles to soaring 70,000 feet above the Earth are about to shrink for future U.S. Air Force pilots.

The Air Force is launching an experimental program to put pilots into the cockpit of the legendary U-2 spy plane faster and earlier in their careers. The move is in line with a service effort to increase pilot production in all airframes.

The change means that beginning this fall, students in undergraduate pilot training may select the U-2 on their “dream sheets,” just as they would for any other plane, Air Force officials at Beale Air Force Base, Calif., said Monday.

Currently, U-2 pilots spend a minimum of six years in other aircraft before applying for the U-2 program, the Air Force said. They come from every military flying background – fighters, bombers, tankers, transports and trainers – as well as from the Navy, Marines and Coast Guard.

The field is competitive and demanding. U-2 pilots fly solo for up to nine hours, reaching altitudes above 70,000 feet.

Prospective pilots can apply for the U-2 First Assignment Companion Trainer, or FACT, program.

“The well-established path to the U-2 has proven effective for over 60 years,” Lt. Col. Carl Maymi, commander of the 1st Reconnaissance Squadron at Beale, said in a statement. “However, we need access to young, talented officers earlier in their careers. I believe we can do this while still maintaining the integrity of our selection process through the U-2 FACT program.”

The effort to accelerate the U-2 pipeline comes as the Air Force grapples with a shortage of about 2,000 pilots across the service. Leaders are looking at ways to increase the number of pilot production in all airframes by about 200 a year.

The Air Force will initially select only two U-2 pilot candidates for the program. Every undergraduate pilot training student from Air Education and Training Command’s flying training locations, during the designated assignment window, is eligible, according to the Air Force.

The first candidate will be selected this fall; the next one will be chosen about six months later.

Each selectee will attend T-38 pilot instructor training at Joint Base San Antonio-Randolph, Texas, before moving to Beale for an assignment as a T-38 instructor pilot for the U-2 Companion Trainer Program.

After gaining experience, the pilot will perform the standard two-week U-2 interview process and, if hired, begin basic qualification training.

Depending on how the two student pilots fare, the Air Force will decide whether to continue with the experimental U-2 pilot pipeline, service officials said in a statement.

Also known as the Dragon Lady, the U-2 has been flying for more than 60 years. The high-altitude reconnaissance plane was designed during the early days of the Cold War to spy on the Soviet Union.

The plane has since been adapted to perform various military and civilian roles, equally adept at tracking terrorists in Afghanistan and the migration of spruce bark beetles in Alaska’s forests, NASA said in a 2015 report on the aircraft.

The Air Force seems to have abandoned plans for now to mothball the venerable spy plane. Once slated for a 2015 retirement, the U-2 has stuck around amid growing demands for surveillance capabilities and rising costs of the Global Hawk, once billed as the U-2’s replacement.

Pentagon leaders said last year they planned to keep the U-2 well into the future.