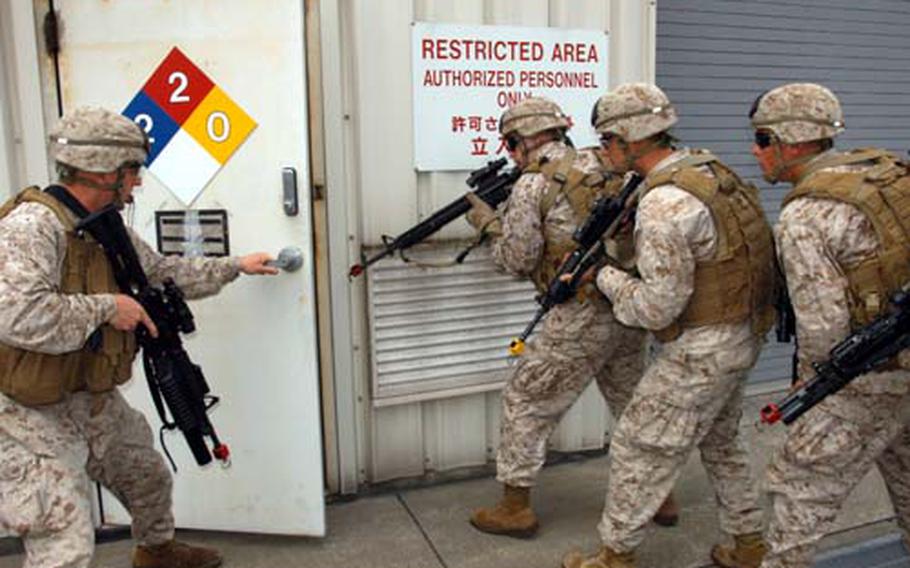 Marines from the Fleet Antiterrorism Security Team at Yokosuka Naval Base prepare to enter a building during an exercise on Tuesday. The FAST Company was conducting a joint exercise with the base’s security department. (David Carter / S&S)

YOKOSUKA NAVAL BASE, Japan &#8212; Spend enough time on the base here and you&#8217;ll probably notice Marines marching in formation, driving around in their Humvees or even doing pull-ups outside the gym.

"We&#8217;re pretty much a force multiplier for the existing forces in theater," said Master Sgt. Gary McFarlane, operations chief and senior enlisted adviser of FAST Company, as it is known.

The unit specializes in visit, board, search and seizure maritime interdiction &#8212; an increasingly important practice with the current spate of piracy.

Although Yokosuka and Atsugi Naval Air Facility currently have their own naval security forces, McFarlane said the company recently initiated a close partnership with the bases&#8217; security departments.

"It didn&#8217;t make sense to have a resource like us on the base and not put it to use," McFarlane said. "We&#8217;ve been conducting drills with the bases since February, assessing their security plans and letting them know where they might want to make changes and why."

Last week at Yokosuka, the Marines had the opportunity to showcase their expertise in a joint exercise with the base&#8217;s security department.

Hearing a simulated report of multiple armed suspects on base, FAST Company arrived and quickly neutralized the situation by either apprehending the suspects or eliminating them.

So far the unit has completed similar drills at Sasebo Naval Base, Naval Air Facility Atsugi, Chinhae Naval Base in South Korea, and on Guam.

Broken into two platoons, the company can provide support to multiple locations around the Pacific simultaneously.

The FAST Company platoons work on seven-month rotations, McFarlane said, with one platoon staying behind each time to ensure the new platoon is up to speed on the operational environment.

"We always have an overlap with outgoing and incoming platoons," he said. "We&#8217;re designed that way for consistency."

If a threat or attack on a U.S. base is imminent, McFarlane said FAST Company is ready to initiate action around the clock.

"We always have ammunition pre-staged," he said. "That gets us to the point where response times drop from minutes to seconds."