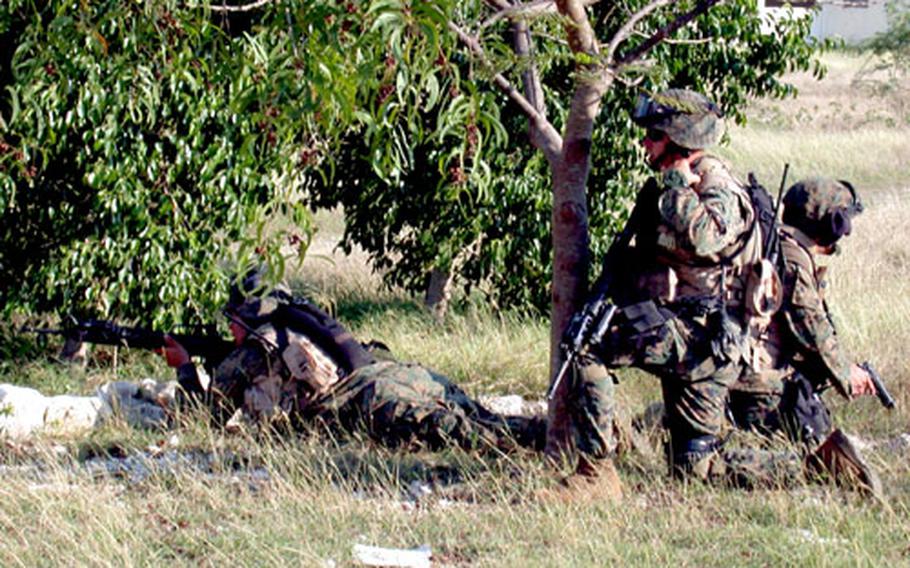 U.S. Marines from 7th Platoon, 2nd FAST Company make up the containment team securing the perimeter of a compound used during a training exercise Saturday. The exercise, during which the Marines practiced a raid on two targets believed to house drug and weapons smugglers, provides “real world” training to keep skills sharp while deployed to Haiti. (Sandra Jontz / S&S)

U.S. Marines from 7th Platoon, 2nd FAST Company make up the containment team securing the perimeter of a compound used during a training exercise Saturday. The exercise, during which the Marines practiced a raid on two targets believed to house drug and weapons smugglers, provides “real world” training to keep skills sharp while deployed to Haiti. (Sandra Jontz / S&S) 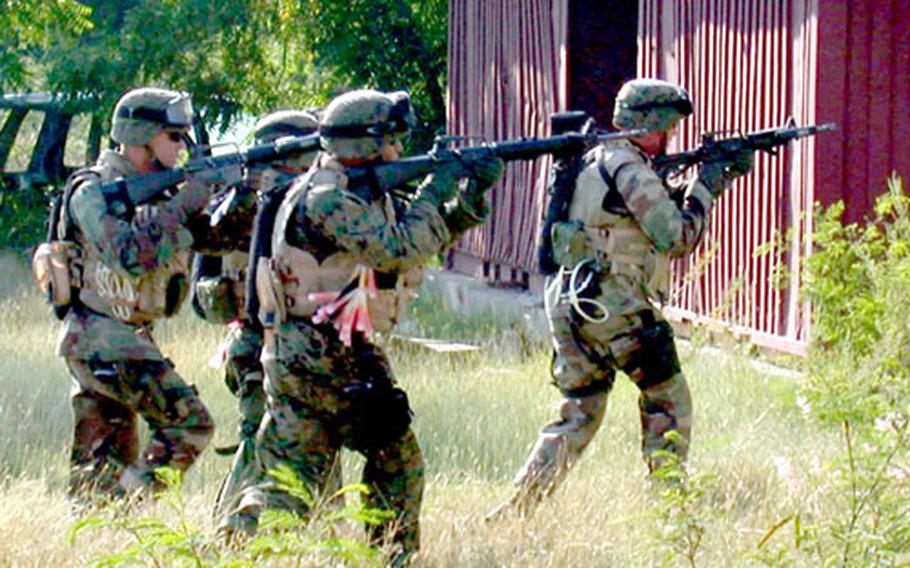 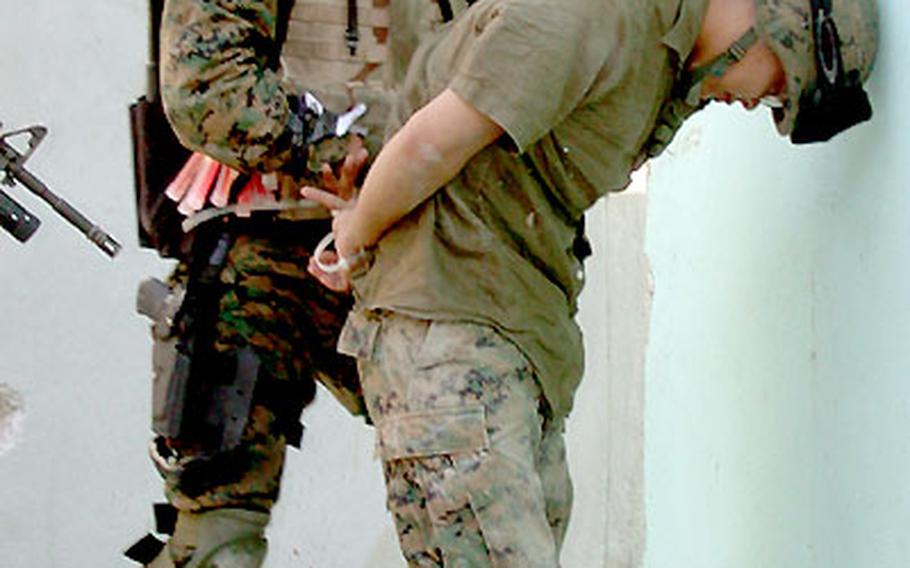 PORT-AU-PRINCE, Haiti &#8212; A short, stocky man code-named &#8220;Indian&#8221; is suspected of hoarding weapons and drugs at his home for his trafficking business. There are others based at the home, armed men and likely women and children.

With that information, U.S. Marines from 7th Platoon, 2nd FAST Company raided the home during a training exercise Saturday aimed at keeping their skills sharp while deployed to Haiti.

And Cpl. Jason Romlein, 27, got a chance to refresh skills of his military police dog, Baro, whose bark and threat of bite convinced the two suspects, played by fellow Marines from the team, to disclose where they&#8217;d hidden the cash, weapons and drugs.

The 50-some members from the Marine Corps&#8217; Fleet Anti-Terrorism Security Team, or FAST, from Yorktown, Va., arrived Feb. 22 after U.S. Ambassador to Haiti, James Foley, asked the Pentagon to provide added embassy security.

They&#8217;re part of the Corps&#8217; Quick Reaction Force, ready to respond at a moment&#8217;s notice while deployed in Haiti, and when stateside, ready to respond to any point on the globe within 24 hours and to be self-sufficient for 30 days.

But since the arrival of thousands of infantry Marines, the FAST team has been pretty much consigned to being a backup force in case something goes wrong for the other Marines patrolling Port-au-Prince neighborhoods and other regions in Haiti.

Company Commander Capt. Bryce Armstrong said the need for them to be there is great: The nation still is not fully secure, and they might be needed or to bail out others who might need them.

For the few raid missions they had done weeks ago, the FAST Marines coordinate and work with the National Haitian Police.

But to keep the Marines occupied and sharp, they train, such as with Saturday&#8217;s raid, in which they practiced rapid disembarks in full &#8220;deuce&#8221; gear &#8212; vest, weapons and Kevlar &#8212; from a CH-47 Chinook and UH-60 Black Hawk, holding a perimeter, securing buildings and interrogating prisoners.

Formed in 1987, the Corps&#8217; FAST Marines are trained for quick in-and-out and security missions, and were used for security against incursions on U.S. Navy installations in Panama, in 1991 to secure Navy assets in Bahrain and the U.S. Embassy in Monrovia, Liberia, in 1994 to secure a U.S. mission in Somalia during Operation Restore Hope, in 1996 for security after the terrorist bombing of Khobar Towers in Saudi Arabia, in 1998 to secure two U.S. embassies Kenya and Tanzania after bombings, and in April 2000 in Yemen after the bombing of the USS Cole.

The Corps has three companies, two stationed in Yorktown, Va., one in Norfolk, Va., but is developing more. Instead of seven platoons, future companies will have five platoons each.