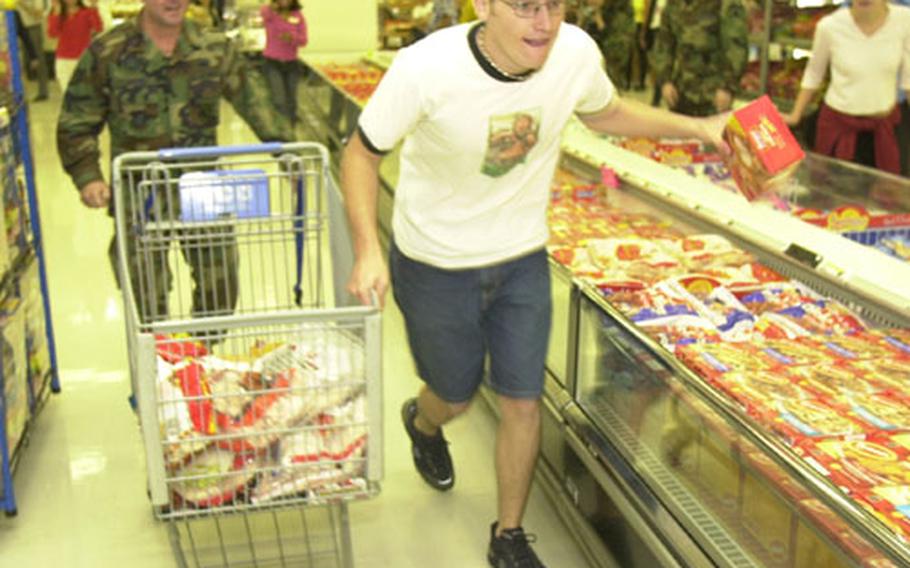 Staff Sgt. Korey Clark runs by the frozen foods section at the Yokota Air Base Commissary. He was one of the two winners of the "Fast Feet" shopping spree. (Jim Schulz / S&S)

YOKOTA AIR BASE, Japan &#8212; For two Yokota airmen, grocery shopping may never be this fun again.

They sprinted down the aisles, grabbing huge slabs of meat, family-size detergent, gobs of toilet paper and enough frozen food to feed a small army.

&#8220;It was awesome,&#8221; Clark said while trying to catch his breath after filling two shopping carts.

The airmen won the &#8220;Fast Feet&#8221; portion of the 374th Services Division&#8217;s annual customer rewards contest. Clark entered his name on the back of a receipt from the Mexican restaurant Pancho Villa, while Johnson said her entry came from the Enlisted Club.

The shopping-spree ground rules included: no tobacco products, no more than two of the same brands and only one of each meat cut.

When the clock started ticking, Johnson made a beeline for the produce section. She bypassed the melons and apples for two, tall Japanese &#8220;happy trees.&#8221; Price: $56 apiece.

As a small crowd cheered her on, Johnson bagged a 16-pound box of detergent, 10 pounds of spare pork ribs, 48 rolls of toilet paper, two packs of beef jerky, 16 rolls of paper towels, three bags of frozen chicken breasts and more.

Clark wasn&#8217;t far behind, grabbing $434 worth of groceries while his pregnant wife, Jennifer, egged him on. &#8220;I was yelling the whole time,&#8221; she said, reminding him not to forget junk food to satisfy those late-night cravings.

The couple bought a freezer to stash their goods, since they&#8217;re traveling back to the United States in a month. Clark heeded his wife and raided the ice cream section, nabbing two 1-gallon bins of vanilla fudge, among other frozen treats.

The commissary gave out several prizes Friday morning, including two one-minute sprees where shoppers could take home up to $50 in groceries, and another 30-second spree worth up to $30.