Farmers barricade themselves in school near Camp Humphreys 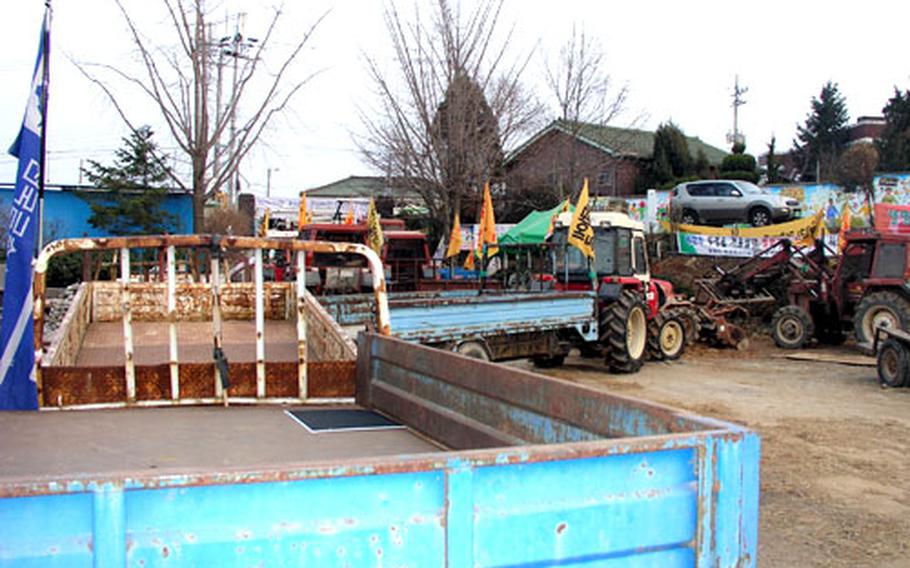 The South Korean government wants residents of the Daechu-ri farming village to move out so the U.S. military can triple the size of Camp Humphreys in coming years. The residents are using the Daechu-ri Elementary School grounds as a headquarters for their resistance. They have refused to leave their homes or vacate the school grounds. Here, vehicles and farm equipment have been put in place as a barricade behind the gate to the school. (Franklin Fisher / S&S)

The South Korean government wants residents of the Daechu-ri farming village to move out so the U.S. military can triple the size of Camp Humphreys in coming years. The residents are using the Daechu-ri Elementary School grounds as a headquarters for their resistance. They have refused to leave their homes or vacate the school grounds. Here, vehicles and farm equipment have been put in place as a barricade behind the gate to the school. (Franklin Fisher / S&S) Inside the school, a room is set up as a Buddhist place of worship. Residents of the surrounding Daechu-ri farming village are using the room while barricaded inside the compound. (Franklin Fisher / S&S) Several men mill about inside the barricaded grounds of the Daechu-ri Elementary School on Tuesday. (Franklin Fisher / S&S) 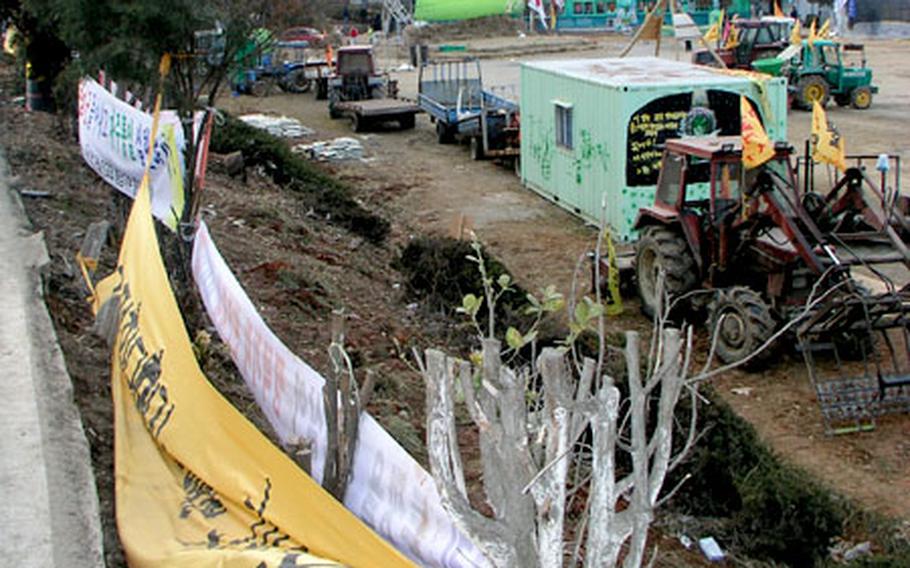 A view from a street just above the grounds of the Daechu-ri Elementary School shows vehicles and heavy equipment lined up in a barricade. (Franklin Fisher / S&S)

DAECHU-RI, South Korea &#8212; Residents of a farming village near Camp Humphreys are ready to face arrest, even death, rather than let South Korea&#8217;s government move them off their land, a Catholic priest helping lead the resistance said Tuesday.

The government wants the residents out so the U.S. military eventually can triple Camp Humphreys&#8217; size, making it the main U.S. installation on the peninsula.

The Rev. Mun Jeong-hyun&#8217;s comments came one day after government officials under heavy police escort aborted their attempt to serve an eviction notice on those occupying the grounds of the Daechu-ri Elementary School, a short distance from Camp Humphreys&#8217; fence line.

Mun said the resisters expect further attempts to oust them from the school and Daechu-ri village, possibly by force.

He acknowledged the government likely would prevail should it use force. But if residents were killed or seriously injured, he predicted, authorities would face public scrutiny and incur lasting public censure.

No injuries were reported in Monday&#8217;s confrontation, in which police and resisters scuffled. Officials abandoned the effort to serve the eviction notice, fearing the scuffling would trigger more serious violence, police said later.

But they said they&#8217;re weighing their next moves. And South Korean news reports stated the Ministry of National Defense reportedly plans to seal off about 2,000 acres &#8212; a tract that includes Daechu-ri &#8212; with barbed wire fencing and security checkpoints.

The reports said the ministry also plans other measures to thwart holdouts from resuming farming later this month, the farming season&#8217;s traditional start.

The ministry on March 3 neither disputed nor confirmed the reports. It since has said it would issue a statement on the matter this week.

Of about 144 households in Daechu-ri before the government began its land purchases in 2005, about half have left and about 70 households remain, Mun said.

Because it borders Camp Humphreys, Daechu-ri has become a center for opponents of the base&#8217;s expansion. Resisters have turned the school grounds into a makeshift headquarters.

Standing prominently along the village&#8217;s roadsides and in the fields are banners and placards bearing slogans opposing the expansion and the U.S. military presence in South Korea. The school compound is festooned with such signs.

Male villagers man informal security checkpoints on the roads, warming themselves at fires and watching for police or others associated with the government or the U.S. military. No firearms or other weapons were visible at the checkpoints or inside the school grounds.

When a Stars and Stripes reporter was escorted into the village Tuesday night, close associates of leaders displayed guarded civility. But few residents offered smiles; most seemed careful to avoid eye contact.

To block attempts to enter the compound, resisters have parked a thick cluster of tractors and other vehicles behind the front gate, which was sandbagged and otherwise fortified against entry.

The two-story school building is green and white. Its windows bear local artists&#8217; paintings of village residents. The interior is scuffed, dusty and in general disrepair; a creaky wooden staircase leads to the second floor.

One room is set up as a Buddhist worship space with a statue of Buddha positioned on an altar.

Outside, just yards from the school&#8217;s front entrance, is a long, hut-like structure covered in clear plastic sheeting. Inside, several people sit on the ground in what look to be attitudes of prayer or mediation.

The farmers have drawn the backing of a network of South Korean activist groups, including the Pan-Korean National Task Force Against Expansion of U.S. Bases in Pyeongtaek. The task force said Monday it would continue to support the holdouts and maintain its opposition to the Camp Humphreys expansion.

Mun said many of the remaining villagers felt themselves too old or poor to seek new homes and also felt the government cared little for them.