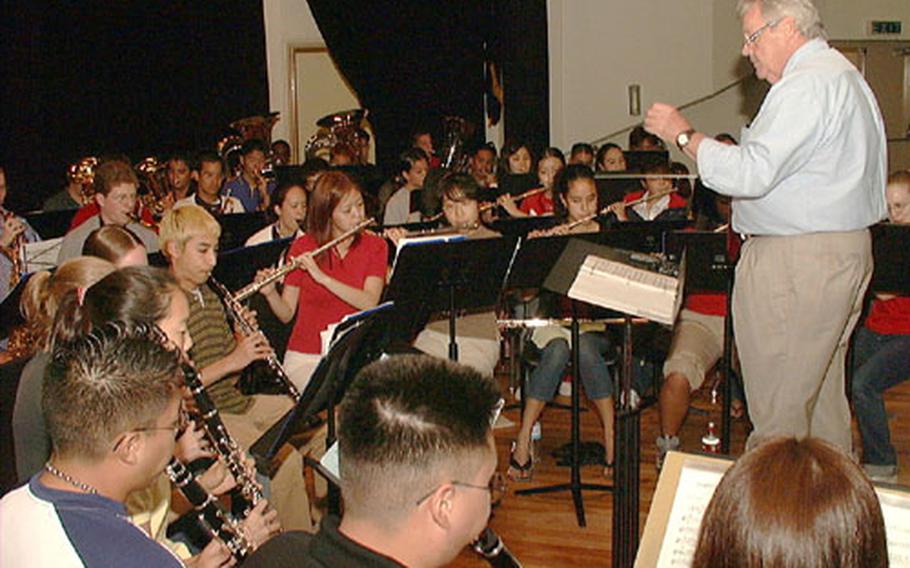 KADENA AIR BASE, Okinawa &#8212; The halls are alive with the sound of music.

The annual event brings together DODDS&#8217;s best musicians from schools throughout the Pacific.

Festival participants will perform a free concert Saturday to cap their weeklong stay on the island.

For students, the &#8220;biggest advantage&#8221; is receiving a week of intensive training from different conductors, said Larry Domingue, Kadena High&#8217;s band director. Each band teacher brings a different style or area of expertise to help broaden the students&#8217; musical knowledge, he said.

Another bonus, said Kadena High sophomore Dan Burkey, is being around like-minded students and teachers who share a passion for music.

Dan is singing bass for the second year in the festival&#8217;s honor choir. He said family and friends often hear him spontaneously break out in song while at home or walking through school halls.

For music aficionados, the chance to sing eight hours a day, with no other classes to attend for an entire week, &#8220;is really great,&#8221; said Kadena High senior Brean Dyer, a first soprano for the honor choir.

To make the cut, students had to master audition material they received before Christmas, said Domingue. They submitted individual tape recordings demonstrating their vocal or instrumental skills.

Those selected spent the past several months, on their own or in small groups, practicing the material to be played at the festival.

Honor choir and bandmembers from all the various DODDS schools performed together for the first time Tuesday; it was the first of four days of practice leading up to their concert. Saturday&#8217;s performance begins at 7 p.m. in Kadena High&#8217;s auditorium.